August 7, 2013
On August 6, Japan commemorated the 68th anniversary of the atomic bombing of Hiroshima, which, between the blast itself and the effects of radiation, killed well over 100, 000 people. The bombing of Nagasaki three days later killed tens of thousands more.

The following bit of information – quite interesting, I might add – comes from the book Fatima: The Great Sign, by Francis Johnston, originally published in 1979. (Click here to order a copy directly from the publisher.) 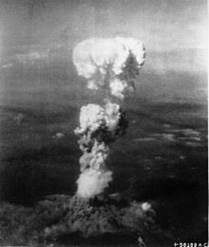 The power of the Fatima message was underscored for the whole world during the atomic bomb explosion at Hiroshima on 6 August 1945. A German Jesuit and seven of his colleagues were living only eight blocks from the blinding centre of the nuclear flash, yet all escaped while flaming death screamed around them. To this day, all eight occupants of that building are alive and well while others living some distance away continue to die from the radiation effects of that frightful holocaust. Over the years some two hundred scientists have examined these eight survivors, trying to discover what could have spared them from incineration or the lethal storm of radiation. Speaking on TV in the United States, the German Jesuit, Fr. Hubert Shiffner, gave the startling answer. 'In that house the rosary was prayed every day. In that house, we were living the message of Fatima.' His words seemed to underline Sister Lucia's statement in 1977: 'Our Lady will protect all her dear ones.' (page 139)


In May, Pope Francis consecrated his pontificate to Our Lady of Fatima. (Source)

Click here for information about the Fatima apparitions and message.


From Marc Hyden, national advocacy coordinator for Conservatives Concerned About the Death Penalty:


Conservatives are becoming increasingly concerned about the high costs of this government program that we rarely use, as well as the risk of executing innocent people. It's causing many of us to question whether capital punishment is consistent with conservative values.

The Catechism of the Catholic Church teaches:

Today, in fact, as a consequence of the possibilities which the state has for effectively preventing crime, by rendering one who has committed an offense incapable of doing harm – without definitely taking away from him the possibility of redeeming himself – the cases in which the execution of the offender is an absolute necessity 'are very rare, if not practically non-existent.' (2267)