The Eucharist is 'the source and summit of the Christian life.' 'The other sacraments, and indeed all ecclesiastical ministries and works of the apostolate, are bound up with the Eucharist and are oriented toward it. For in the blessed Eucharist is contained the whole spiritual good of the Church, namely Christ himself, our Pasch.'

The following are excerpts from chapter seven of the book The Most Holy Eucharist, by Father Thomas J. McGovern. Thanks to Charlie McKinney, president of Sophia Institute Press, for allowing me to feature these excerpts in my column. Click here to order a copy of the book directly from the publisher.

Adoration of the Eucharist

The Development of Eucharistic Adoration
In the Mass we express our faith in the Real Presence of Christ under the species of bread and wine by, among other ways, genuflecting or bowing deeply as a sign of adoration of the Lord. The Church has always encouraged devotion to the Eucharist, not only during Mass, but also outside of it, reserving consecrated Hosts with the utmost care, exposing them to the solemn veneration of the faithful, and carrying them in procession.

It was faith in the Real Presence of Christ that led to devotion to Jesus in the Blessed Sacrament outside of Mass. In the first centuries of the Church the sacred species was reserved so that Communion could be taken to the sick and to those in prison awaiting martyrdom because they had confessed their faith. Gradually the faith of the people caused them to see the great treasure in the reservation of the Blessed Eucharist. The Church has since been untiring in establishing and investing the Blessed Sacrament with more and more solemnity, homage, and devotion. 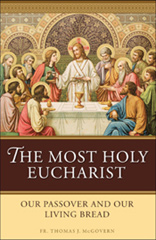 While Holy Thursday celebrates the institution of the Eucharist, the richness of the many events commemorated during those days does not allow adequate time to reflect on the greatness of the miracle of the Real Presence.

Thus it was that in 1241, in Liège, Belgium, our Lord appeared to St. Juliana, a cloistered nun who had a deep devotion to the Eucharist, and asked her to tell the local bishop to institute a public procession in honor of the Blessed Sacrament on the Thursday after Trinity Sunday. This good nun made known her request to the bishop of Liège, who was favorably impressed. The feast was approved in 1246 and was observed for the first time in Liège the following year, when the Blessed Sacrament was carried through the cities and towns of the diocese.

One of the people to whom St. Juliana first made known our Lord's desire for the Corpus Christi procession was Jacques Pantaléon, archdeacon of Liège, who subsequently became Pope Urban IV. Urban IV readily agreed and in 1264 published a beautiful document on the Eucharist, the Bull Transiturus, in which, having affirmed the love of the Savior for us as expressed in the Blessed Sacrament, he ordered the annual celebration of Corpus Christi on the Thursday after Trinity Sunday, at the same time granting many indulgences to the faithful for attendance at Mass and the divine office on that day....

The pope asked St. Thomas Aquinas to compose the office and hymns of the Mass for this feast; these include such well known hymns as Pange Lingua, Lauda Sion Salvatorem, Panis Angelicus, and O Salutaris Hostia. The custom of the Corpus Christi celebration was warmly recommended by Trent....

At the Corpus Christi procession in Rome in the Jubilee Year 2000, Bl. John Paul II said: "With humble pride we will escort the Eucharistic sacrament through the streets of the city, close by the buildings where people live, rejoice and suffer; between the shops and offices where they work every day. We will bring it into contact with our lives beset by a thousand dangers, weighed down by worries and sorrows, subject to the slow but inexorable wear of time. As we escort him we will offer him the tribute of our hymns and prayers."....

As the implications of the Real Presence came to fruition in the minds of Christians, different forms of eucharistic worship grew in the Mass and Communion. The reservation of consecrated Hosts was, as we have seen, originally for the purpose of bringing Communion to the sick and to those who were absent.

Only during the Middle Ages, in the West, did there arise a more explicit worship of the Real Presence, with the emphasis on adoration. In the twelfth century the custom grew of elevating the Host after the Consecration. In the thirteenth century, the adoration of the Host developed outside of Mass along with popular attendance at processions of the Most Blessed Sacrament. In the fourteenth century, the use of exposition of the Host in the monstrance was introduced. Subsequently the Blessed Sacrament was exposed during the recital of the canonical hours. At the end of the fifteenth century, the Forty Hours' Adoration was initiated, in commemoration of the forty hours spent by our Lord in the tomb. During the Renaissance, tabernacles were erected on the main altars of churches....

Christ's intention to develop the worship of his presence is more particularly evident in the promise made to the disciples before his definitive departure from the earth: "I am with you always, to the end of the world" (Matt. 28:20). This promise alludes to the name of God cited in Matthew 1:23: Emmanuel, "God with us." Knowing that his absence will cause them sorrow, Jesus guarantees his continuous presence, which will accompany them in the ordinary course of all of their days. In saying that it will be thus "to the end of the world," Jesus assures his disciples that his presence will accompany them in the great mission of evangelization of all the nations, which will come to an end only with the conclusion of the history of humanity....

J.R.R. Tolkien, reflecting on a period when he had nearly ceased practicing the Faith, intimates how he was rescued by "the never-ceasing, silent appeal of the Tabernacle, and the sense of starving hunger." Writing to his son Michael about marriage, Tolkien, in a revealing account of his own soul, advises him:


Out of the darkness of my life, so much frustrated, I put before you the one great thing to love on earth: the Blessed Sacrament.... There you will find romance, glory, honor, fidelity, and the true way of all your loves on earth, and more than that: Death: by the divine paradox, that which ends life, and demands the surrender of all, and yet by the taste (or foretaste) of which alone can what you seek in your earthly relationships (love, faithfulness, joy) be maintained, or take on that complexion of reality, of eternal endurance, which every man's heart desires.


Tolkien's deep appreciation of the Real Presence was the foundation of his faith. It also had a profound influence on his literary philosophy.

Jesus always awaits us in the Tabernacle. When we think of Christ present in there, his infinite love for us personally, and the fact that he stays with us to encourage and console us, to invite us to grow in friendship with him, we begin to appreciate why we should make at least one visit to the Blessed Sacrament at some time during the day....

St. Teresa of Avila wrote that when she heard the people say they wished they had lived when Christ walked on the earth, she would smile to herself, for she knew that we have him as truly with us in the Blessed Sacrament as people had him then, and wonder what more they could possibly want....

Everything in this world will come to an end – except the presence of Christ....