October 29, 2013
(A version of this column originally appeared at Catholic Online.)

The following is an interview with prolific Catholic writer Father James V. Schall, S.J., a longtime professor of political philosophy at Georgetown University (which, by the way, has been in the news recently; click here and here) until his retirement in 2012.

Thanks to Father Schall for taking the time to answer my questions; and to Kevin Wandra of Carmel Communications for facilitating the interview. Father's latest book is Reasonable Pleasures: The Strange Coherences of Catholicism; click here to order a copy directly from the publisher, Ignatius Press.


Matt C. Abbott: Father, could you give my readers an overview of your latest book? What inspired you to write it? 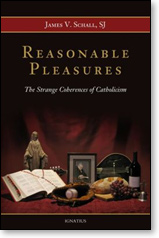 Father Schall: This book was written during a semester that I was recovering from jaw cancer. I was given a semester sabbatical leave to recover. I was over the worst in a couple of months, so I had some time before the Spring Semester (2011) began. I had long wanted to take up the Aristotelian theme that all human activities have, by nature, connected with them a proper pleasure.

Obviously, a different kind of pleasure exists for every kind of activity. We forget that even thinking, or especially thinking, has its proper pleasure. Aristotle even says, speaking of politicians, that if they do now know or experience pleasure in the highest things, they will seek them in lower things. That is really the testimony of human experience.

The basic theme of the book is that pleasure as such is a good, a natural good that was intended to be consequent to or implicit in any act. Yet, it is clear that we have many possibilities to separate pleasure from its proper act. When we do this, we introduce disorder into our souls. Our lives should be full of delight and pleasure. But in a proper order. Putting order into our pleasures is the work of reason. It often takes understanding followed by discipline or practice. We are to order our lives. No one else will or can do it for us. Thus a principal part of education is simply to teach what sort of pleasure belongs to what act and why.

Our human lives have many levels. What this book strives to do is to spell out the levels and to point to the pleasures proper to human living. I do this in part to recall that many heresies or philosophic disorders want to make pleasure an evil. There can be evil connected with pleasure, but only when we separate it from its proper act.

Obviously, the title of the book assumes that there are "unreasonable" pleasures. Actually, the un-reason does not lie in the pleasure itself but in the activity from which it flows. It is always my position that to live well, we must think well. This is why this book is really an exercise in thinking about pleasures in their different modes. We do not forget that our end is seeing God, eternal life. But this "seeing" this beatific vision, is also a delight. But we do not "see" God for the delight of seeing but for God Himself. The delight follows the seeing. Once we understand this relationship, we can better order our lives to delight in them.

Matt C. Abbott: Over the last few decades, there has been an alarming decline of faith and practice in many Catholic colleges and universities (and in society at large). What can be done to restore the sacred in Catholic academia?

Father Schall: The decline of faith and practice is not an exclusively college phenomenon. Probably, when it comes to understanding and practicing the faith, universities are the last, not first, places to expect wide spread belief.

I have written a number of books that are vaguely addressed to this problem – Another Sort of Learning, Students' Guide to Liberal Learning, and The Life of the Mind. It does not take much to open the eyes of an intelligent young man or woman to the truth of things and to the fact that they are not finding it in what they are being presented. This means that they must find a different path. There is nothing wrong with learning what the culture stands for and demands. One must know his enemy, as it were. Eric Voegelin once remarked that no one has to participate in the disorders of his time. This is true. But it demands what can only be called "intellectual courage," the kind Socrates complimented Plato's brothers, Adeimantos and Glaucon, for having in book two of the Republic. 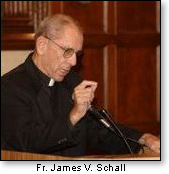 I have often been struck by something that I think Joseph Ratzinger said in one of his early essays. The reason we cannot pass on the faith automatically is because it is not possible to do so. Each generation must accept or reject what the previous generation believed and accepted. In both cases, what is believed should also be reasonable even faith is directed to reason and does not contradict it. In this sense, we should not be overly surprised that one generation loses faith and another gains it. After all, it usually happens that we can see the foibles and disorders of past generations. What we do not see is our own. We think that because we are different we are therefore right; sometimes yes, sometimes no.

What we need to do is to find the source of truth, both that which our reason can figure out and that which we hear from revelation, which is also addressed to the truth of things. Truth has a bad name today. And rightly so, because if you want to do simply what you want to do, you do not want to be bothered by truth. Therefore, it is best to deny its very possibility. But this path really does not work either. It cannot be true that nothing is true. Catholicism is an intellectual religion, or better a religion or a revelation directed to reason. Once we understand this, we can find writers and teachers who will guide us further. But to believe we also have to live well. Otherwise, we use our minds to justify our living as we want. We end with only our own paltry "truth" that does not conform to reality. Then we wonder why we cannot be happy when we are doing only what we want.