April 9, 2014
God bless pro-life teen Thrin Short, who was recently assaulted at the University of California at Santa Barbara by a radical feminist professor who reportedly earns a six-figure salary to teach courses such as "Black Women in Pornography." (Sources here and here)


The Santa Barbara District Attorney filed charges of grand theft, battery and vandalism against Professor Mireille Miller-Young for violence she committed against Thrin Short, the young pro-life activist who held a peaceful outreach on the UC Santa Barbara campus on March 4.

According to the police report, the professor found the literature and her graphic abortion sign 'disturbing' and 'offensive' .... Asked if there had been a struggle, Miller-Young stated, 'I'm stronger, so I was able to take the poster,' the report said. The radical pro-abortion professor also claimed that she set a good example when she attempted to incite students to violence and initiated the theft of the pro-life activist's sign.

But instead of condemning the use of violence against the pro-life teen, pro-choicers on campus are rallying in support of the professor. 'They are domestic terrorists, because the definition of a terrorist is someone who terrorizes,' said UCSB sophomore Katherine Wehler, a theater and feminist studies major who has taken a class taught by Miller-Young.


(Click here to see photos of, and to hear an interview with, Thrin.)


Christopher Manion has an interesting piece in the April 2014 issue of New Oxford Review titled "Canon Fire: Burke vs. Wuerl."


In May 2007, as he was traveling to Brazil on his first papal trip outside Europe, Pope Benedict XVI told an inquiring reporter that he would support Mexican bishops who, with recourse to canon 915, excommunicate pro-abortion lawmakers in their country. 'It is part of the code,' Benedict said. 'It is based simply on the principle that the killing of an innocent human child is incompatible with going in communion with the body of Christ.' 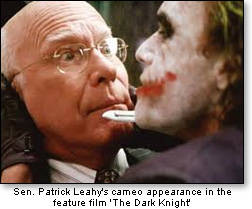 Within hours, a reporter from The Hill, a congressional newspaper in Washington, D.C., asked Patrick Leahy, a [pro-abortion] Democratic senator from Vermont, to comment on the pope's statement. Leahy's reply was blunt: 'I've always thought that those bishops and archbishops who for decades hid pederasts and are now being protected by the Vatican should be indicted.' Leahy, a Catholic, has served as chairman of the Senate Committee on the Judiciary since January 2007, a position he holds to this day. Did his searing remark play a quiet role in a recent Vatican re-assignment?

When Pope Francis was elevated to the Throne of Peter in March 2013, he took his time in reviewing the membership of the Vatican's various congregations. Finally, in December 2013, Francis appointed Donald Cardinal Wuerl, archbishop of Washington, D.C., to replace Raymond Cardinal Burke as the only American serving in the Congregation for Bishops, which is tasked with reviewing candidates for the episcopacy, whose names will then be submitted to the pope.

The change is not insignificant. In particular, the two cardinals differ profoundly on the controversial application of canon 915 in the case of American public figures. Cardinal Wuerl has long maintained a 'pastoral approach' regarding the many prominent Catholic politicians in his archdiocese who publicly advocate abortion....


(Click here to read Mr. Manion's commentary in its entirety.)


From Laurie Higgins of the Illinois Family Institute:

French parents living amidst a swamp of secularism had the wisdom and boldness to pull their children out of school for one day in January to protest Leftist efforts to use public schools to normalize gender confusion through the 'ABCD of Equality' program established by France's feminist Minister of Education.

America parents should do likewise this Friday on the 'Day of Silence,' when the Gay, Lesbian and Straight (re)-Education Network (GLSEN) will be using children and government subsidized schools to normalize gender confusion and homoerotic identity politics....


(Click here to read Mrs. Higgins' call to action in its entirety.)