May 6, 2014
The following is the introduction to the recently-released book Making Gay Okay: How Rationalizing Homosexual Behavior Is Changing Everything, by Robert R. Reilly. Thanks to Ignatius Press and Carmel Communications for allowing me to publish this excerpt in my column. Click here to order a copy of the book directly from the publisher. (Click here to read a review of the book in the National Catholic Register.)

Prior to reading the excerpt below, I think it would be good to revisit what Pope Francis wrote about the push to legalize same-sex "marriage" when he was archbishop of Buenos Aires:


Let's not be naive, we're not talking about a simple political battle; it is a destructive pretension against the plan of God... We are not talking about a mere bill, but rather a machination of the Father of Lies that seeks to confuse and deceive the children of God. The Argentinean people will have to confront, in the coming weeks, a situation whose result could gravely injure the family. We are speaking of a bill regarding marriage between people of the same sex.... (Source)


Also, regarding homosexuality, the Catechism of the Catholic Church teaches (paragraphs 2357–2359): 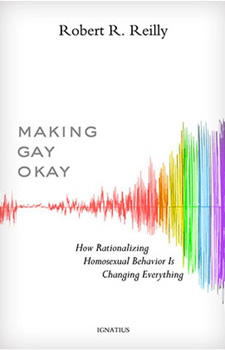 Many people are puzzled as to why anyone would or should get exercised over the issue of homosexual "marriage" because, when seen in isolation, it may appear to be a small matter that affects only a very tiny proportion of the population. If homosexuals constitute some 2 percent, an even smaller percentage of them will avail themselves of marriage, if it is allowed. That is certainly the evidence from countries, such as Canada and Sweden, where it has already been permitted for some years. So why all the fuss?

The concern can be understood only when the issue is seen within the broader perspective of the false reality of which it is a part and, in many ways, the completion. The foundation stone of this false reality, as we shall see particularly in terms of Supreme Court decisions, was contraception, and the capstone is same-sex marriage. The progression from the one to the other was logically inescapable.

In my last year in college many years ago, I was discussing with a classmate the status of objective morality. He was strongly inclined toward moral relativism, and soon we got down to the bedrock principle of noncontradiction (i.e., that a thing cannot both be and not be in the same way, at the same time, in the same place). To my amazement, my classmate was willing to dispute this, stating that we do not know if this is true and speculating that at some point it might be shown not to be so. The conversation had to end there because there was no longer any basis upon which it could proceed.

At the time, I did not know that he was a homosexual. Later, while still a young man, he died of AIDS. Put bluntly, he denied the principle of noncontradiction, and the principle of noncontradiction denied him. Ideas have consequences, and so do actions based upon them. This is what is going to happen to us as a society if we put the capstone of same-sex marriage into place. We will be living a lie.

My thesis is very simple. There are two fundamental views of reality. One is that things have a Nature that is teleologically ordered to ends that inhere in their essence and make them what they are. In other words, things have inbuilt purposes. The other is that things do not have a Nature with ends: things are nothing in themselves, but are only what we make them to be according to our wills and desires. Therefore, we can make everything, including ourselves, anything that we wish and that we have the power to do. The first view leads to the primacy of reason in human affairs; the second leads to the primacy of the will. The first does not allow for sodomitical marriage, while the second does. Indeed, the problem is that the second allows for anything. This is what the same-sex marriage debate is really about – the Nature of reality itself. Since the meaning of our lives is dependent upon the Nature of reality, it too hangs in the balance.

This book is also about how to live rightly in respect to our sexual Nature. This issue is addressed within the opposing perspectives of a teleological and nonteleological human Nature. In Plato's Gorgias, Callicles said to Socrates: "He who would live rightly should let his desires be as strong as possible and not chasten them, and should be able to minister to them when they are at their height by reason of his manliness and intelligence, and satisfy each appetite in turn with what it desires." As he so often did, Socrates responded with a question: "And the culmination of the case, as stated – the life of catamites – is not that awful, shameful, and wretched? Or will you dare to assert that these are happy if they can freely indulge their wants?" (491e – 492a). Is right the rule of the stronger, as Callicles asserted, and can one therefore freely indulge one's desires? Or, as Socrates suggested, is there something in the constitution of human Nature that makes the sexual use of boys shameful because it is wrong? We will address these questions.

The plan of this book is first to present the nature of the culture war of which the struggle over same-sex "marriage" is a major part, to examine how rationalization operates as its animating force, and then to lay out the issues in a philosophical way, including the meaning of Nature as it was first used in Greek philosophy. Next, I will explicate the opposition to that understanding of Nature, utilizing the thought of Jean-Jacques Rousseau as its exemplar. The second part of the book will show how the homosexual rationalization and the thinking upon which it is based have marched through and devastated the institutions of American society and government – especially the judiciary, science and psychiatry, education, the Boy Scouts, the military, and US diplomacy. It is one thing to grasp the issues in the abstract and another to see how they work their way out in the practical details of daily life. Much of the natural-law argument against same-sex marriage will be given in responses to the arguments made in its favor in each of these settings, especially in the courtroom. I make no case from religion or revelation in this book, only from reason as it discloses to us the Nature of things.

It should be emphasized that this critique of the homosexual cause is not an attack upon homosexuals, nor is it generated by any animus against them. Over the course of several decades, my professional work in the arts has brought me into association with many homosexuals. I have been at pains to promote the work of those whose art I thought was stellar, without regard to this issue. In fact, in my many interviews and discussions with artists and composers whom I happened to know were homosexual, I have never had the subject of homosexuality arise in connection with their work or, in fact, in any other way. It was irrelevant. When someone once raised the subject when I was with a young homosexual artist who had already reached star status, the artist quickly dismissed the subject and simply responded, "It doesn't define me." This book is not about them and is not meant to offend them. It is about those who insist not only on defining themselves in this way, but on defining the rest of us as well.

My apologia would, of course, be hard to believe for anyone who has collapsed the distinction between the nature of an act and the person performing the act. It is this vital distinction that allows one to judge the act, not the person. It is also this distinction that removes any moral onus from a person whose homosexuality or, say, alcoholism is no fault of his own. But even a genetic predisposition, if such exists, to homosexuality or alcoholism does not deprive a person of his free will, so the person is still morally responsible for his homosexual acts or drunkenness. (Of course, if one has no free will – which is suggested by those who declare sexual restraint or abstinence to be impossible – then any notion of morality becomes absurd.)

Only an omniscient God can finally judge the true condition of a man's soul, but this in no way means that we cannot come to an understanding of the moral nature of an act, that we cannot know that some acts are great evils. I am sure this statement will not allay the inevitable charges of homophobia, but it is meant sincerely.

Note on usage. The word Nature is capitalized when referring to the metaphysical concept and lowercased when it is used synonymously with "character." In different legal and cultural settings, the word sodomy has included different things at different times. But, in every variation, it has always encompassed anal intercourse and is meant to here as well. Among other things, gender means "the state of being male or female," according to the Oxford Dictionary. I do not surrender the word to those who use it to mean that the masculine and the feminine are artificial constructs socially or politically engineered for men and women. Therefore, someone of the feminine gender is a woman – not someone who thinks he is a woman. The word good is capitalized when it refers to the divine, as in its use by Plato.