July 14, 2014
The following is the prologue to Defending Marriage: Twelve Arguments for Sanity, by Anthony Esolen. Thanks to Saint Benedict Press for giving me permission to publish this excerpt in my column. Click here to purchase a copy of Defending Marriage directly from the publisher. 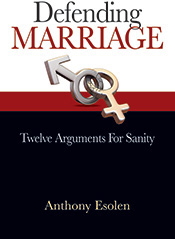 I am writing this book in gratitude to my father and mother, who introduced me to God and to the Church and to love.

In my mind's eye I see a photograph of my parents before I came into the world. They are relaxing upon the beach at a local lake, one of those little picnic areas with a concession stand for hamburgers and fries, and an arcade with skee-ball and other games of skill and luck, and picnic tables, and plenty of ordinary people with their shouting troops of children.

In those days you didn't have to discern which lakes were good for children and which weren't, since every place except for a few of the taverns were for children, and people comported themselves accordingly. I never got the impression from my mother and father that such modesty implied any sacrifice or exercise of self-control. It was the natural expression of an innocence they had kept whole and hearty into their young adulthood.

That's not to say they were reserved or prudish. Far from it. It's hard to pretend to be the cool socialite when you are the children of hardscrabble Italian coal miners, when neither one of you could entertain any thought of college, and when you grew up in big families with only a couple of bedrooms and an outhouse. But there was my mother, a beauty in a one-piece bathing suit, and my father, all skinny muscle and bone, both of them dark from the sun. They were in love with one another.

I write those words – they were in love with one another – and they should need no explanation. But I must explain nevertheless. It's the whole scene at the lake that we must remember. My father and mother didn't deliberate about it, because they didn't have to. It was taken for granted; to be in love, not just to feel the rush of infatuation, but really to love, is not to see only the beloved and nothing else in the world, since that's to turn the beloved into an idol, and no idol can bear the weight of worship. The idol must collapse into disillusionment, into rubble and dust. It is instead to see the love you share as embracing the world, not bound by place and time, by chance and change. It is to say, "All that I am is yours, now and forever." The love of the married man and woman remembers the past and opens itself in humility and gratitude to the future, in the very act of its consummation. It binds together the generations. In it we recall the children we were, and we bring the child into our midst, born from our love.

My father and mother could not get married right away. He had to serve in the army for two years first, and during that time they hardly saw one another. She worked in a dress factory to support her parents, until her youngest sister graduated from high school and could take her place. Then he had to find a job that would pay well enough for them to begin a family. They waited for three years, and during that time they did not pretend that they were married. That is, they did not sin against the family. They did not act in selfish uncharity against the children – those they would bear, and the other people's children who were swimming and splashing that day at Chapman's Lake.

I've said that they had preserved the innocence of children. They had also preserved the child's natural sense of the sacred. I'm not talking here about the objects in a church. Imagine a place most dear to you, because there you go in the fullness of solitude, to collect yourself, to think, to contemplate, perhaps simply to be. Imagine a secret garden, enclosed with hedges and vines, whose existence no one suspects, though within it are mazy paths and sudden springs and flowers that have no name. Or perhaps it is a rocky outcrop of a hill, barren of green except for the moss on the stones and the low-lying patches of blueberry and wintergreen. You don't bring other people to this place. It means too much for that. You couldn't bear it if they treated it as a paltry thing. But you know that you will someday bring one person there, the one who will love it also, but who will, in a mysterious way, change it, complete it, because you are not complete in yourself. You know you are not complete, because your sex instructs you in that plain fact every day of your life. It proclaims, "You are for the other."

And yet that still does not comprehend the reality, when a man and a woman give themselves, as man and woman, to one another without reserve and forever. The garden is secret, but the marriage is public, and it must be so, and the evidence was all around my father and mother at the lake, noisy and happy and impossible to miss – the children, the little ones, and the lanky ones and the sturdy adult ones and the gray haired ones. The love of the married man and woman is not a private romance, but a recapitulation of the love that brought them into being in the first place, and that love is what we all duly celebrate. It betokens our continuing in time, through children; it gives our distant ancestors and our distant descendants a place among us.

Did my parents abstain from sex before they were married? What an ugly expression it is, and misleading, too! They could no more abstain from "sex" than they could suspend the laws of gravity, as in a cartoon, and imagine themselves not-a-man and not-a-woman, or a half-man and half-woman, or whatever nightmare of unreality one may prefer. My father was a man and my mother was a woman – even a little child would know that. Sex is what nature provided them with. Did they then "abstain" from uniting in the marital embrace? Once you call things by their proper names, the names that reveal their reality, you see that the question makes no sense. To do what married people do, while not being married – to engage in the marital act without matrimony – to do the child-making thing, while denying it in intent, is to contradict yourself. It is to tell a lie. What they "abstained" from was the pretense, the lie. It is like saying that they abstained from painting graffiti all over a priceless statue. It is like saying that they held their itching fingers back from uprooting the roses in the garden. It is like saying that they denied themselves the pleasure of amputating a finger or hand; that they spurned the delights of self-betrayal, rationalization, and ennui. It is like saying that they refused the enticement to grow feeble before their time.

Yes, I'm quite aware that the marital act is attended by great physical pleasure. All the more then should that pleasure be enjoyed at the right time, in the right way; just as one does not order a wedding cake for dessert unless there has been a wedding, or lavish presents on an irresponsible student who has failed his exams. My parents did not abstain; that's what an athlete might do with beer to shed a few pounds. My parents kept themselves pure and whole for one another – for the other in his or her sexual being, which implies openness to generations past and to come. They wanted joy, not pleasure on the cheap. They wanted a feast filled with guests with something real and good to feast about, and not something sickly in a brown bag. They wanted more, not less.

They went to the altar as children, free of the memory of having betrayed or having been betrayed, free of the disheartening fear that the mock-reality has come before the ceremony, free of any reason for guilt. They were far from the only people who did so, then. Eight weeks later, I was conceived.

I wrote this book to help people return to the goodness of reality: the goodness of sexual being, male and female for one another. The proximate motive for the book is the move, mainly among the wealthy people of the west, bored with reality and indifferent to this goodness, to pretend that a man can in fact marry a man, or a woman a woman. Gentle or inattentive or morally compromised people may say, "Let them do as they please," but no denial of reality comes without a steep cost, especially the reality of something as profound and powerful as sex. I wish to help people recover a sense of what made that photograph of my mother and father possible – an innocent passion that we no longer know.

The following are twelve arguments against the notion that we can pretend that there is no such thing, really, as sex – that is, that a marriage is even conceivable apart from a man and a woman. But my real aim lies beyond that. It's to reconsider all of the sad mistakes we've already made, so that we may once again have a world in which families thrive, in which families and not amputated individuals or mass industries or metastatic bureaucracies determine what a culture is and what it is for; or rather, in which that all-time-embracing sexual love of man and woman in marriage makes possible the conditions for any genuine culture at all.

I have seen too much loneliness and unhappiness, too much chaos without and deadness of heart within, to pretend that the moral law that all people accepted until a few years ago, even if they sometimes fell afoul of it, does not still hold true, and does not still offer men and women their best chance for happiness in this life. We may obey it or not; but the penalty for disobedience isn't ours to determine, no more than if we leapt from a cliff, intending to fly by flapping our arms. Nature is not obliged to confirm our self-deceit.

(Anthony Esolen, Ph.D., teaches Renaissance English Literature and the Development of Western Civilization at Providence College. He is a senior editor for Touchstone: A Journal of Mere Christianity, and a regular contributor to Crisis Magazine.)