August 12, 2014
In 2012, conservative commentator-author Ann Coulter derided "purist" pro-lifers – in other words, pro-lifers who don't believe it's OK to kill babies conceived through rape or incest.


No law is ever going to require a woman to bear the child of her rapist. Yes, it's every bit as much a life as an unborn child that is not the product of rape. But sentient human beings are capable of drawing gradations along a line.

The overwhelming majority of people – including me – are going to say the law shouldn't force someone who has been raped to carry the child.


Right there in Texas, near where Dr. [Kent] Brantly left his wife and children to fly to Liberia and get Ebola, is one of the poorest counties in the nation, Zavala County – where he wouldn't have risked making his wife a widow and his children fatherless.

But serving the needy in some deadbeat town in Texas wouldn't have been 'heroic.' We wouldn't hear all the superlatives about Dr. Brantly's 'unusual drive to help the less fortunate' or his membership in the 'Gold Humanism Honor Society.' Leaving his family behind in Texas to help the poor 6,000 miles away – that's the ticket.


But you shall receive power when the Holy Spirit has come upon you; and you shall be my witnesses in Jerusalem and in all Judea and Samaria and to the end of the earth. (Acts 1:8)

Presented with Ms. Coulter's absurd dichotomy – as if the Church must choose between serving at home or abroad – we have an opportunity to remember how the Church is poorly served by those who reduce her or her teaching to merely 'conservative' or 'liberal' labels. Ms. Coulter has no idea what motivated Dr. Brantly, and mocking a father who faces death for his service is simply reprehensible. At the very least, she owes him and his family an apology. 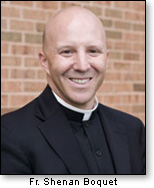 As I understand it, Ms. Coulter supports Church teaching on many of the controversial issues, and has at times defended the Church in secular, general terms. Yet when it comes to evangelizing and serving the poor, her radical secularism blinds her to the authentic Christian response. Our response must be one of love, solidarity and service, as fully as our situations allow us to respond. A Christian missionary who responds to God's authentic call to serve abroad exhibits all of these virtues, precisely by being the hands of Christ in serving the poor. Yes, even to the ends of the earth.

Unfortunately, since the United States exports so many ills to the ends of the earth – abortion, dangerous contraceptive drugs, degrading materialism, and the like – we have a special responsibility to the poor to show them that not all Americans simply see them as problems to be solved. If Ms. Coulter is interested in understanding that which she criticizes, I know many people to whom I could introduce her – wonderful people from Human Life International's missionary field, or from other religious or secular apostolates.