January 17, 2015
Below is the foreword to Abortion Free, a recently-released book by Troy Newman and Cheryl Sullenger. The foreword is written by Dr. Alveda C. King, director of African American Outreach for Priests for Life and founder of Alveda King Ministries. She's a mother, grandmother, Gospel minister, singer, songwriter, producer and author.

Thanks to Dr. King, WND Books, Cheryl Sullenger and Troy Newman for permitting me to publish this excerpt in my column. May God bless them in their pro-life endeavors! Click here to order a copy of the book. 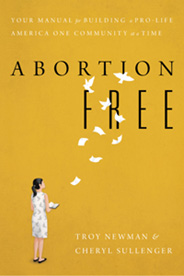 People perish for lack of knowledge. Babies, mothers, and entire communities are perishing from the scourge of abortion. And yet people do not know the truth about abortion. It is the killing of innocent babies, and it inflicts misery upon the lives of vulnerable women. I for one hid the truth regarding my abortions for many years, until I heard the truth about abortion and found freedom from guilt and shame. That is why Troy Newman and Cheryl Sullenger invited me to write this foreword; I appreciate the honor of adding my testimony to their journals.

Since 1983 I have delivered the truth about abortion from a public platform. Many know my voice from the work I do as director of African American outreach for Priests for Life where I am also a spokeswoman for The Silent No More Awareness Campaign. I also have received healing from the Priests for Life's Rachael's Vineyard abortion recovery ministry. It is through this work that I met Troy and Cheryl and came to know of their powerful efforts at Operation Rescue (OR) to uncover and dismantle the harmful forces that drive the abortion industry.

The truth of abortion bothers them so much that they have devoted years of research and activism to exposing the stark reality about the licensed-to-kill doctors who are slaughtering our innocent babies. They have spent a collective lifetime not only exposing the horrors of what goes on behind the closed doors of abortion mills but also diligently working to close these killing centers down for good. And they are succeeding.

Their research, awareness crusades, and direct intervention continues to break down the once impenetrable barriers between the unsuspecting general public and the killing of the unborn. They reveal the secret wealth of the abortion mills that are paid to commit the genocide.

Troy and Cheryl are not alone in this quest; truly there are hundreds of thousands of foot soldiers who give their all every day to defend the sanctity of life. We commend every warrior as we support Troy and Cheryl in their work laboring on the frontlines of the war as pillars in the vanguard in the battle for life. Where once people had no idea about the horrors of abortion, now they do.

Abortion free is not a suggestion. Abortion free is a promise that there will be an end to the scourge of abortion. Thanks in a large part to the efforts of Operation Rescue, cofounded by Newman and Sullenger, our society is moving in the direction of fewer and safer abortions.

My uncle, Dr. Martin Luther King, Jr., often spoke about the sanctity of all life. He preached compassion against "man's inhumanity to man." He once said that "injustice anywhere is a threat to justice everywhere." Thanks to OR and now this new book Abortion Free, the dream has wings. There are now compelling testimonies from the front lines in the battle for life, as well as the detailed how-to steps to exposing the repugnant practices inside the killing centers.

For the motivated and the purpose-driven souls who want to end the gruesome practice of killing babies and maiming mothers, Abortion Free answers not only the question How do you close abortion clinics. Indeed it also includes in plain language the tested and vetted steps to closing these killing centers and making America abortion free. This is twenty-first-century divine intervention.

Finally, as a minister of the Gospel of Jesus Christ, Who is absolutely "the Way, the Truth and the Life," I believe that we must be grateful that Troy and Cheryl understand the connection between the gospel truth and the gospel of life. In this practical how-to guide to ending the scourge of abortion, I believe we will discover a vital weapon in a war that is not only winnable but one that is being won. Let us march onward towards the freedom in the liberty awaiting us in this compelling volume.

(From Abortion Free, by Troy Newman and Cheryl Sullenger, published by WND Books, 2014.)


Also on the pro-life front (from a news release edited by yours truly)...


A new report says Illinois is facing a serious women's health crisis and the Illinois Department of Public Health is receiving the heat for the crisis.

Researched and released by Illinois Right to Life, the 66-page report documents serious health violations and regulatory loopholes in women's clinics that endanger the health and safety of female patients statewide.

'What's even more unconscionable is that the Department of Public Health failed to produce any documentation showing that women who had abortions in unsterile clinics were warned of the potential risks. No woman should leave an abortion clinic needing HIV testing, a tetanus shot or hospital emergency treatment, yet for 15 years the Illinois Department of Public Health has abdicated all responsibility to ensure licensed abortion clinics are safe and sanitary.'

The state requires tanning salons to have annual inspections, nursing homes must receive inspections every 15 months, and Chicago restaurants are also subject to a once-yearly inspection. Illinois abortion clinics, however, are inspected an average of once every nine years – and no sanitary inspection policy for licensed women's clinics exists.

While Illinois Right to Life's report may provoke accusations of bias, the sources cited come directly from the Illinois Department of Public Health and the (largely pro-abortion) mainstream media.

Click here for more information and to read the report.