The following is an interview with Dawn Eden, author of the highly-acclaimed My Peace I Give You and the Catholic edition of The Thrill of the Chaste, released on Jan. 26. Dawn's full bio can be found here.


Matt C. Abbott: What inspired you to write a Catholic edition of The Thrill of the Chaste? What are the main differences between this edition and the original? 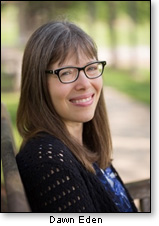 Dawn Eden: For several years, I had been wanting to revise The Thrill of the Chaste, because my understanding of chastity – especially its relationship to Christian joy – had deepened since I became a Catholic. I especially wanted to make the book accessible to men, as the first edition was directed at women, and many male readers had told me they needed a book like it for them.

When I wrote the original edition of The Thrill of the Chaste in 2005, I was Protestant – having converted as an adult from Judaism – and was preparing to enter the Church. My life before my conversion to Christianity was pretty typical for an unmarried rock journalist from New York City, so my new walk forced me to make some serious changes. Initially, it was hard for me to discern how living chastely could be compatible with Christian joy. I looked for a book to guide me, but all I could find were books on teen purity – which were not exactly relevant for a 31-year-old woman. That is why, after a few years of learning how to find meaning and happiness in my new way of life, I wrote The Thrill of the Chaste. It is the kind of book I wished had been there when I needed it.

Today, having been Catholic for nine years, I can hardly believe that I managed to be joyfully chaste without the benefit of Confirmation, the Eucharist, Confession, and the whole life of the Church. Being a member of the Mystical Body of Christ, and receiving Jesus' own Body and Blood in the Eucharist, has given me a deeper understanding of the meaning of being embodied. I see more clearly how chastity enables one to love fully in each relationship, in the way that is appropriate to the type of relationship and to one's state of life. Chastity is not just for singles; in marriage, it enables couples to grow together in freely willed, total, faithful, and fruitful love. For that reason, I wanted to make the new Catholic edition of The Thrill of the Chaste relevant for men and women, whether they are discerning marriage or a celibate vocation, and that is what I have done.

Matt C. Abbott: You've been a critic of certain controversial interpretations of Saint John Paul II's Theology of the Body. What role, if any, does TOB still have in regard to the New Evangelization?

Dawn Eden: Saint John Paul II's Catechesis on Human Love, as he called it – the "theology of the body" is a nickname – is important to the New Evangelization, but one should be careful not to isolate it from the larger corpus of Saint John Paul II's teaching or from the tradition upon which the pope built. Bishop Jean Laffitte, secretary of the Pontifical Council for the Family, gave a very good interview on this topic in 2011 and I recommend it for those interested in learning more.

Matt C. Abbott: What are your thoughts on the leadership of Pope Francis?

Dawn Eden: I am a fan of Pope Francis – the real Francis, not the caricature of him painted by the mainstream media and the pundits who accept uncritically what the mainstream media reports – and I quote him in the new [edition of] The Thrill of the Chaste. When it comes to upholding the Church's moral teachings, he is far more old-school than many people realize. He has given us some of the best common-sense advice on chastity of any pope since Pius XII.

Matt C. Abbott: Where do you believe God is leading you in terms of your vocation, and why?

Dawn Eden: At the time that the original edition of The Thrill of the Chaste was published, in late 2006, I thought that writing and speaking would always be the mainstay of my career, and that marriage would be my vocation. A year later, I was hit with thyroid cancer, and the ensuing treatment – which was successful, thank God – led me to rethink my career plans.

I went back to school to study theology, and, under the encouragement of a holy Jesuit, discerned a call to teach on the college level. As I continued working toward a pontifically licensed doctorate, I discerned further that God was calling me to make a complete gift of self by consecrating my celibacy to the Sacred Heart through Mary's Immaculate Heart. In the Catholic edition of The Thrill of the Chaste, I talk about the dynamics of such discernment.

Today I am writing my dissertation under the direction of Dr. Matthew Levering at the University of Saint Mary of the Lake. In terms of my vocation, my hope is to formalize my consecration under a diocesan bishop. However, that will have to be in God's time, as the bishops I have met in the United States do not consecrate women unless they fit into the recognized diocesan vocations of virgins or hermits. So, I am waiting on the Lord, seeking to use this time to enter more deeply into the mystery of spiritual motherhood.