May 8, 2015
Karen Malec, who was president and co-founder of the Coalition on Abortion/Breast Cancer, died May 5 after a battle with ovarian cancer. She was 60.

Mrs. Malec was a lovely person and a prominent figure in the pro-life movement for a number of years.

Arlene Sawicki, a good friend of Mrs. Malec and vice president of the coalition, wrote:


Karen was a survivor of colon cancer for over 20 years, but succumbed to ovarian cancer, which was diagnosed more than a year ago. Her commitment to informing women about the abortion/breast cancer link was fueled by her own struggle with this dread disease when she was a very young mother.

The website www.abortionbreastcancer.com is considered to be one of the most comprehensive and reliable resources available today, and its content is entirely due to Karen's continuous work and dedication. Karen had expert knowledge on the subject and traveled widely to give talks and presentations at various pro-life conferences.


We in the leadership of the pro-life movement in the United States are saddened to hear of the death of our friend and colleague Karen Malec. For many years, I was able to observe her work, close up, in teaching people about the indisputable fact that the single most avoidable risk factor for breast cancer is abortion. I saw her persevere through the attacks that come when those in the academic world – and the rest of the world, too – want to close their eyes to the scientific evidence of this link.

I was delighted, just this past January, at the national prayer service at which I preach on the morning of the March for Life in Washington DC, to present to Karen the Pro-Life Recognition Award, bestowed by the National Pro-Life Religious Council [see photo below]. She deserved this honor, as did her colleagues Dr. Joel Brind and Dr. Angela Lanfranchi, who both likewise are at the forefront of researching and educating people about the link between abortion and breast cancer.

The best way we can honor Karen, now that she has been called from this life, is to inform ourselves about the message she worked so hard to spread so that other lives may be saved. 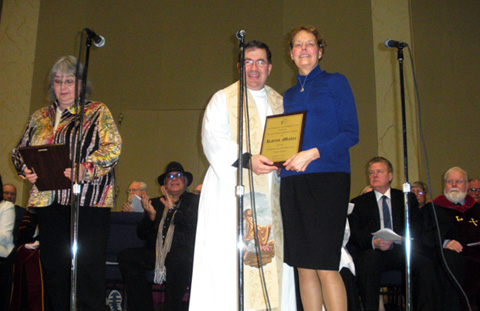 For those who have a devotion to Our Lady of Fatima (I do), Catholic author and journalist Michael H. Brown writes about the English translation of a 2013 book titled A Pathway Under the Gaze of Mary:


For decades, those who followed the apparitions have been puzzled by a cryptic remark that Sister Lucia later said was at the end of the second secret or the beginning of the third and stated, 'In Portugal, the dogma of the Faith will always be preserved etc.' That was followed by the famous and mysterious third secret that was not revealed until June of 2000. When it was finally made public, the image reported bore no relation to Portugal, leaving the mystery and confusion intact.

In the book, however, the nuns say that on one occasion, as she was meditating, Sister Lucia, who virtually never spoke about the messages, had 'let slip' that 'if Portugal does not approve abortion, then it is safe, but if approved it will have much to suffer.

Add the nuns, in the book, 'Today Portugal is under the weight of the three social sins that require reparation and conversion: divorce, abortion, and the civil marriage between persons of the same sex. It is a great moral crisis that explains all other crises. A body sick with gangrene does better with treatments, but while the disease improves, treatment does not eradicate the source of evil, and death will be the end.'

Thus: abortion appears to be integrated into the Fatima appearances, at least in Sister Lucia's later interpretations.

Also, please pray for the repose of the soul of Father Nicholas Gruner, leader of The Fatima Center, who died suddenly of an apparent heart attack on April 29. I should mention that back in 2000, I wrote a short yet uncharitable commentary about Father Gruner that appeared in a Catholic newspaper. I regret that I wrote it.