Matt C. Abbott
What's going on with the Vatican and Medjugorje?

June 1, 2015
(A version of this column originally appeared at Catholic Online.)

Those who are at all familiar with the reported Marian apparitions in Medjugorje, Bosnia-Herzegovina, might be interested in the following developments.

Although a definitive judgment has yet to be announced by the Church – a commission formed in 2010, under the auspices of the Congregation for the Doctrine of the Faith, reportedly concluded its work in January 2014 – there have been recent indications that the Holy See deems the reported apparitions not worthy of belief.

According to Crown of Stars, a pro-Medjugorje blog:


The prayer gathering for youth and family scheduled at Sestola in Italy on June 21 has been cancelled by parish authorities after receiving notification from Cardinal Gerhard Müller, prefect of the Congregation for the Doctrine of Faith, prohibiting the meeting.

The Medjugorje visionary Vicka Ivankovic-Mijatovic and her husband Mario had been invited by the organizers to give testimony. Vicka attended the annual event the previous two years....

It is not the first time the CDF prefect has issued instructions to Italian bishops concerning Medjugorje prayer days. It is understood that 'reminders' were sent to bishops of two Italian dioceses in October 2014 because of the advertised presence of Medjugorje seer Vicka Ivankovic at two prayer meetings, and earlier this month a scheduled visit by Ivan Dragicevic to Mestrino in Padua was also cancelled following the CDF's intervention.

It now seems to be the case that Cardinal Müller is intent on discouraging any witness outside of the Medjugorje parish by the six seers associated with the phenomenon and by its promoters. The CDF prefect has issued prohibition notices, reported so far, in three countries: USA, Spain and Italy.


In March, there was this news item out of St. Louis:


Earlier this month, Archbishop Robert Carlson addressed a memo to priests and deacons in the archdiocese:

'I have received a request from the Congregation for the Doctrine of the Faith to remind everyone that they are not to participate in events that promote the so-called visionaries of Medjugorje and in particular Mr. Ivan Dragicevic.'

Prior to the March 3 memo, Dragicevic had been scheduled to speak at Lindenwood University in St. Charles, about 25 miles from St. Louis. 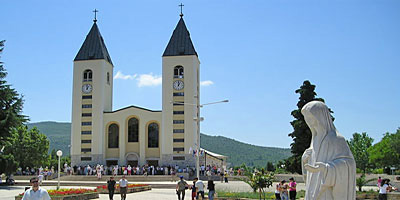 In recent weeks, a source informed me that the Vatican commission has concluded that the reported apparitions are not supernatural in origin, "but because of the publicity surrounding [them] and the potential chaos that could result from the announcement, the authorities in Rome are sitting on it for now."

I asked veteran Catholic journalist John L. Allen Jr., associate editor at The Boston Globe and Crux, if he could verify what I was told by my source.

"What you describe has actually been the case for a while, reaching back at least to the time when [Cardinal Tarcisio] Bertone was in the [Congregation for the Doctrine of the Faith]. The dilemma is wanting to back up the local bishops versus not wanting to impugn the legitimate spiritual fruits."

In an essay on the historical and controversial aspects of Medjugorje, EWTN theologian Colin B. Donovan writes:


These 2013 letters [from Church officials regarding the alleged seers of Medjugorje] clearly represent a change of pastoral attitude on the part of the Holy See, one which began before the end of the pontificate of Pope Benedict and which has now been affirmed by Pope Francis. An attitude of seeming tolerance has been replaced with a firm call for acceptance of the ecclesiastical judgments made to date, or at least publicly acting in accordance with them. Whether this is simply to dispose all parties (pro and con) to accept the final judgment of the Church when the pope issues it, whatever that judgment may be, or, in view of a decision of the same character as the previous ones, remains to be seen....

From the most recent statements of ecclesiastical authority it is clear that no Catholic may participate in events which presume the authenticity of Medjugorje. The older statements emphasized only the prohibition of those holding an office in the Church (bishop, pastor, rector, chaplain or other) who would, by virtue of that office, tend to lend official sanction to Medjugorje, and thus contradict the decisions of the competent local authorities. Those earlier statements proscribed pilgrimages organized under official auspices; however, common sense suggests that a conference or other activity sponsored by a diocese, parish or other Catholic institution was also prohibited....

While the earlier statements permitted Catholics to go to Medjugorje, and even include priests acting as chaplains, the 2013 statements raise serious questions about the possibility of doing so. It was already inherent in the earlier statements that the valid basis for a pilgrimage must be a balanced Marian devotion. Practically speaking, how does one go on a pilgrimage to a destination whose fame depends on an alleged apparition and not presume it to be authentic? It seems unlikely that such pilgrimages are simply a matter of tourism and not organized with encounters, conferences and other activities to satisfy a presumption of authenticity.


Interestingly, according to Catholic News Agency:


A source within the Congregation for the Doctrine of the Faith told CNA May 19 that 'the conclusions [of the Vatican commission] have not been discussed yet at the congregation, neither in a special meeting nor in a regular meeting.'

Once the congregation analyzes the commission's conclusions and finalizes a document on the phenomena, the bishop of Rome will be able to make a final decision....

Cardinal Puljic told a May 13 press conference in Sarajevo that the pope's visit to Sarajevo 'has nothing to do with Medjugorje' and its alleged apparitions.