Matt C. Abbott
Why I wrote to Pope Francis (about an exorcist)

August 24, 2015
The topic of exorcism has been getting somewhat of a bum rap in recent years. There've been several news stories of people physically harmed and even murdered by mentally disturbed (or just plain evil) individuals who claimed they were performing "exorcisms" on their victims.

In addition, Hollywood's treatment of the subject has often been silly at best.

True exorcisms are relatively rare, but the devil is a reality that needs to be taken seriously.

Why does God allow demonic possessions to occur?

In his book Interview with an Exorcist, Father José Antonio Fortea, a priest of the Diocese of Alcala de Henares (Madrid), Spain, writes: 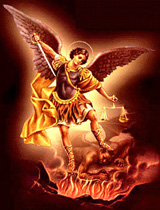 While this is ultimately a mystery, we can see that God allows possession for the following reasons:

 Possession demonstrates the truth of the Catholic faith.

 Possession punishes sinners who seek a relationship with evil.

 Possession can be a spiritual benefit.

Since God allows physical illness, which often brings about an increase in faith, there are even more reasons for Him to permit a reality – possession – that often brings about an even deeper faith. Possession is a phenomenon in which the power of God, Christ, and the Church is clearly demonstrated. It is like an open window through which we can look at the world of hatred and demonic suffering. It is an open window through which we can glimpse some of the invisible power of angelic natures. And the good that comes from all of this normally affects those present for the rest of their lives.

I say 'normally' since merely being present at an exorcism does not guarantee a deeper faith. There are those who, after witnessing an exorcism, attribute everything they have witnessed to natural (or unknown) causes. We shouldn't be surprised at this. After all, there were people in Jesus' time who did not believe in Him even after witnessing His miracles. We have to understand that, regardless of what we see, grace is required for faith. If a person freely decides to resist grace's interior and invisible invitation, he could see the heavens open and hear God speaking to him from on high through the clouds and still believe he was having a hallucination. It is not what we experience that ignites the interior of our immortal souls with the flame of faith; it is the grace of God.

In December 2014, I wrote Pope Francis the following brief letter about a Jesuit priest-exorcist:

I very much appreciate and thank you for speaking out in defense of life, and for imploring us to avoid the snares of the devil.

Enclosed is a short column of mine about the exorcist Father William Bowdern, S.J., who died in 1983. He might be a good candidate for eventual canonization.

God bless you, and please keep me – I struggle with sin – and my loved ones in your prayers.


I haven't received a response, but I figure that someone at the Vatican likely read my letter along with the enclosed column, which is reproduced below (from RenewAmerica, Oct. 13, 2013).

"There are some priests who, when they read this Gospel passage, this and others, say: 'But, Jesus healed a person with a mental illness.' They do not read this, no? It is true that at that time, they could confuse epilepsy with demonic possession; but it is also true that there was the devil! And we do not have the right to simplify the matter, as if to say: 'All of these (people) were not possessed; they were mentally ill.' No! The presence of the devil is on the first page of the Bible, and the Bible ends as well with the presence of the devil, with the victory of God over the devil....

"And we can ask ourselves the question: Do I guard myself, my heart, my feelings, my thoughts? Do I guard the treasure of grace? Do I guard the presence of the Holy Spirit in me? Or do I let go, feeling secure, believing that all is going well? But if you do not guard yourself, he who is stronger than you will come. But if someone stronger comes and overcomes, he takes away the weapons in which one trusted, and he shall divide the spoil. Vigilance! Three criteria! Do not confuse the truth. Jesus fights the devil: first criterion. Second criterion: he who is not with Jesus is against Jesus. There are no attitudes in the middle. Third criterion: vigilance over our hearts because the devil is astute. He is never cast out forever. It will only be so on the last day."


Here's one name I haven't heard mentioned in regard to possible canonization, yet it seems he'd be a good candidate: Father William S. Bowdern, S.J.

Father Bowdern, who was born in 1897 and died in 1983, was the chief exorcist in the 1949 exorcism of "Robbie," the teenaged boy whose case inspired William Peter Blatty's 1971 novel The Exorcist, which subsequently was made into a feature film. The exorcism of "Robbie" took place largely in St. Louis, Mo.

Interestingly, Father Bowdern, who had authored a booklet titled Problems of Courtship and Marriage (1944), reportedly suffered somewhat debilitating effects from the exorcism, although it wasn't something that was publicized.

I asked two individuals who are very knowledgeable of the 1949 exorcism – Thomas B. Allen, author of the book Possessed, and Saint Louis University archivist John Waide – if they've ever heard Father Bowdern's name mentioned as a candidate for canonization. Both responded that they haven't.

At any rate, it's something to consider.

On a related note, there was an interesting interview conducted some years ago by Catholic author and journalist Michael Brown of SpiritDaily.com with Father Walter Halloran, S.J. Father Halloran, who died in 2005, was at the time of the exorcism a Jesuit scholastic and had assisted Father Bowdern for a significant portion of the exorcism.


SD: Father, how many times were you present in the exorcism sessions?

Father Halloran: I suppose every night for three weeks.

SD: Did you have any insight into the origin of the problem?

Father Halloran: In a way he was a victim to the frame of mind of the aunt (who was into spiritualism).

SD: What happened at the end? We're told the Archangel Michael manifested.

Father Halloran: I was taken off five days before the conclusion, but from what I understand there was a very loud sound, a boom – sort of like a sonic boom – and then the boy opened his eyes and said St. Michael came and that it was over. At the same time this took place there were about six or seven priests over in the college church saying their office and there was a huge boom over there and the whole church was completely lit up. Father Bowdern, who was doing the exorcism, and the boy were at the rectory. There was a very, very bright light that lit up the whole church.

SD: What were the most striking physical phenomena that you witnessed yourself during the exorcisms?

Father Halloran: I think the markings on the boy's body. I didn't think there was any way they could have been self-induced, the marks, the scratches, the words, the numbers and that sort of thing that appeared in blood red. When the evil spirit took over the child, there seemed to be nothing he could do about it. There were a couple of times when something very dangerous might have happened and he had no recollection whatsoever of anything that took place when he was in one of these sieges. And that affected me, the power that someone or something has over someone.

SD: Did you see anything fly across the room or furniture move?

Father Halloran: Yeah. The first night I was there I was kneeling at the bed on which the boy was lying and the bed started going up and down and then I just about got hit with a holy water bottle that was sitting on the dresser and came flying across the room and just missed me by an inch or two.

SD: How high was the bed going?


Click here to read the interview in its entirety.

All in all, it's a fascinating case.