Matt C. Abbott
A pope's vision and a powerful prayer

November 27, 2015
Below are excerpts from the 2015 book Pope Leo XIII and the Prayer to St. Michael, by Kevin Symonds, published by Preserving Christian Publications. Thanks to Mr. Symonds and John Parrot for allowing me to publish these excerpts in my column. Click here to purchase a copy of the book.

"...It is well known that in passing from a trustworthy

Witness to another a tale keeps growing." 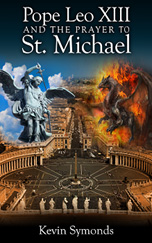 There is a famous story about Pope Leo XIII, the "Prayer to St. Michael the Archangel," and the twentieth century. The account varies, but the basic story has it that one day Leo was in the Vatican when he suddenly received a vision allegedly of a conversation between Jesus Christ and Satan. During the conversation, the latter requested a hundred or so years to test the Church. Christ permitted this trial and gave over the twentieth century world to Satan to this end. The experience is said to have so frightened Pope Leo that he composed the now famous Prayer to St. Michael the Archangel. A general English translation of the prayer is as follows:


St. Michael the Archangel, defend us in battle. Be our safeguard against the wickedness and snares of the devil. May God rebuke him, we humbly pray, and do thou, O prince of the heavenly host, by the power of God, thrust into hell Satan and all the evil spirits who prowl throughout the world seeking the ruin of souls. Amen.


Was a vision behind the composition of the prayer? Reputable information has surfaced that may shed some light on the question.


Mention is often made of Leo XIII and a famous vision that he saw – that of an attack being made or planned by the devil against the Church. The facts about this vision, however, have been unclear for many decades, for there are different versions of what occurred and of what was or was not said in that vision. What is fact and what is fiction about this event in modern papal history?

To provide clarity about Pope Leo's vision, Kevin J. Symonds began a historical investigation to arrive at the facts; to distinguish between rumor or hearsay and the authentic history of the event as well as to explain its meaning for our time in light of the teaching of the Church and, in particular, of the contemporary popes. Related to this vision is the well-known Prayer to St. Michael and a special prayer of exorcism. What became known as the Leonine Prayers began to be recited after Masses throughout the world, taking their name from Leo XIII, but their origin came from his predecessor, Blessed Pius IX.


In his book Pope Leo XIII and the Prayer to St. Michael, Mr. Kevin Symonds presents a very careful and competent historical research about the origin and the circumstances of the publication of the prayer to St. Michael and the above mentioned exorcism formula. Furthermore he gives also a rich spiritual reflection on the Divine truth about the Holy Angels, the fallen angels and the reality and necessity of the spiritual battle. Mr. Symonds' book is indeed very relevant for our times. May this book become widespread and raise to many Catholics – especially the clergy – a new awareness of the necessity to use the spiritual means which God and His Church have given us in order to fight against the infiltration and attacks of the evil spirits.

Such well-proven spiritual means are the prayer to St. Michael and the general exorcism against Satan and his machinations. It would be very helpful to start a worldwide petition that the Holy See may prescribe again the recitation of the prayer to St. Michael after the Holy Mass in all Catholic churches. Furthermore, all priests and bishops should be encouraged to recite often the general exorcism against Satan according to the formula of Pope Leo XIII. The general restoration of the minor order of exorcist would also be a clear witness to the truth that the Church on earth is the Church Militant and that every true Christian has to be a soldier of Christ (miles Christi).

The Church is the Church of Christ, the invincible King of kings, and the true victory over the world is the Catholic faith (1 John 5, 4). St. Michael and the Holy Angels are our brothers and fellows in the worship, the fight and the victory of the Lord of the heavenly army and heaven and earth are full of His glory.