Matt C. Abbott
Mother Teresa: the saint of the smile

December 27, 2015
Below is an excerpt from the newly-released book God's Healing Mercy, by Kathleen Beckman, L.H.S. The excerpt features Blessed Teresa of Kolkata, who will be canonized in 2016. Thanks to Sophia Institute Press for the excerpt. Click here to order a copy of the book. 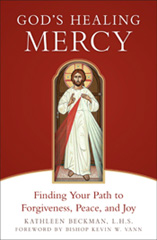 In God's Healing Mercy, "retreat master, Ignatian trained spiritual director and author Kathleen Beckman offers a guide for a personal or group healing retreat based on Divine Mercy in Scripture and in the lives of the Saints. Beckman skillfully helps us to see how the 'rays of divine mercy' heal families, marriages, the sick, poor, suffering, friends, enemies, laity, clergy, our vocations, doubters, believers, those with diabolical suffering, sinners, saints, the unborn, the elderly, children, the Church and the whole world.

Profile in Mercy: Blessed Mother Teresa
Mother Teresa radiated the mercy of Christ for the poor, the sick, and the suffering souls she cared for in the streets of Calcutta. A friend of mine who accompanied Mother Teresa in Calcutta was a woman of means who had never been up close to the immensity of suffering that she saw in the streets of that city. When she and Mother arrived, my friend was overwhelmed emotionally by the scope of the poverty, the sickness, and the suffering. She spontaneously burst into tears and could not stop crying. She sensed that Mother was somewhat perturbed at her reaction to the poor people, but Mother did not say anything at first.

On the second day, however, when Mother saw more tears streaming down my friend's face as they walked the streets of Calcutta among the poor, she spoke firmly: "These suffering people do not need your tears; they are in dire need of your smile." Abruptly, her tears ceased, and, observing Mother Teresa ministering to the poor, she began to imitate her genuine smile.

Mother Teresa stopped to pick up a dying man in her arms to comfort him. Her smile was radiant with joy as she held the man's head and stroked his face and arms. The woman overheard Mother assuring the man as she smiled lovingly upon him, "Soon you will meet my God." She noted that Mother did not try to convert the dying man to her God. However, the Holy Spirit was at work. The dying man replied, "If your God makes you so joyful, then I want to meet your God." Mother continued to smile as the man expired in her arms. Hopefully, he soon met her God.

This story exemplifies God's preferential love for poor, suffering souls. The Lord aims the rays of divine mercy upon them. People who are spiritually or materially impoverished are in need of signs of hope – like what Peter, James and John experienced on Mount Tabor at the moment of Christ's Transfiguration. We can give the poor, the sick, and the suffering a glimpse of divine light when we reach out to them.

Mother Teresa, the saint of the smile for the poor, the sick, and the dying, revealed the secret of God's mercy in the simplicity of a radiant smile for those who suffer. Mother emptied herself to become poor like the people entrusted to her by God. The rays of mercy flowed freely through her unencumbered heart. Isn't it beautiful that something as simple as a loving smile for a suffering person can become a work of mercy? For authenticity, our smile must be born of the realization that our God has been merciful to us.