June 20, 2016
Bishop Rene Henry Gracida, retired bishop of Corpus Christi, Texas, is highly respected among orthodox Catholics. His résumé is impressive, including serving as an airman during World War II.

I recently asked him, via email, about voting in the upcoming presidential election. Bishop Gracida responded as follows: 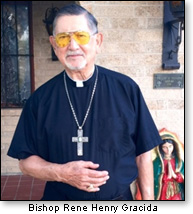 I have never said that Donald Trump and Hillary Clinton are equally evil. I do not know how evil each of them is on a scale of 1 to 100. I only know that, in my judgment, they are relatively more evil persons than they are good persons. I also know that Catholics (and all Christians) cannot choose evil in their life choices.

I have never said that one should not vote. On the contrary, I believe and have always said that citizens of our nation have an obligation to vote and to not vote is sinful. I have only said in the context of my recent post on my blog that a Catholic (and all Christians) cannot vote for Donald Trump or Hillary Clinton. Writing in another person's name on the ballot is not the same as voting for a third-party nominee. Like it or not, our nation operates politically (but I do not know how much longer this will be true) on a two-party system, unlike other democracies that have a parliamentary form of government.

If either Donald Trump or Hillary Clinton is elected in November, I truly believe that America will have passed a 'point of no return.' Read my previous post on this blog by Dennis Prager. The people may get what they want in a leader if they elect either Donald Trump or Hillary Clinton, but then so did the Germans of the Weimar Republic – and look what happened to them!


In January of this year Catholic World Report published an interview with Bishop Gracida in which he spoke about how he dealt with "Catholic" pro-abortion public figures in his diocese:


CWR: When you served as bishop of Corpus Christi, Texas, you declared that some prominent Catholics involved in the abortion industry had excommunicated themselves. You also placed a Catholic politician under interdiction because he supported legalized abortion. Why did you think taking such steps was important?

Bishop Gracida: My impression is that many bishops forget that there is such a thing as canon law when they become bishops. I did not, however. I have great respect for law and the rule of law. In fact, I toyed with the idea of become a lawyer. As a bishop, I kept a code of canon law in my desk.

I challenged Catholics who publicly supported abortion. I invited them to talk. After six months of trying to reason or negotiate with them and nothing happened, I issued a decree declaring that they had automatically excommunicated themselves. The reaction was pretty negative both locally and nationally. Our local paper, which was pro-abortion, attacked me.

Even my brother bishops were very unhappy with me. I participated in a pro-life committee at a bishop's conference, and the chairman, Cardinal John O'Connor of New York, invited me to speak about the excommunications. There were seven bishops in attendance, as well as priests and lay staff. I spoke to them for 15 minutes about what I had done and why. When I had finished, the cardinal asked if there were any questions. There were five minutes of excruciating silence.


To read the CWR interview in its entirety – which I highly recommend – click here.