February 10, 2017
It's difficult keeping up with all the Catholic news these days. Sad to say, a lot of it isn't good.


Every day I pray for Pope Francis. And every day (I am exaggerating, but only slightly), the pope issues another reminder that he does not approve of Catholics like me. 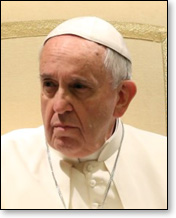 If the Holy Father were rebuking me for my sins, I would have no reason to complain. But day after weary day the pope upbraids me – and countless thousands of other faithful Catholics – for clinging to, and sometimes suffering for, the truths that the Church has always taught. We are rigid, he tells us. We are the 'doctors of the law,' the Pharisees, who only want to be 'comfortable' with our faith.

The Roman Pontiff should be a focus of unity in the Church. Pope Francis, regrettably, has become a source of division. There are two reasons for this unhappy phenomenon: the pope's autocratic style of governance and the radical nature of the program that he is relentlessly advancing.

Some of my readers may be asking: "What do you mean? Give examples of what the pope has said or done that concern you."

Click here for a lengthy article that lists a number of such examples, complete with links. If the article's analysis doesn't convince you that there's a major problem with this pontificate, well, nothing will.

Also of alarming note: Paul Ehrlich, the Stanford biologist who "champions sex-selective abortion as well as mass forced sterilization as legitimate methods to curb population growth," will be giving a presentation at the Vatican later this month.

Dr. Ehrlich, who in 2013 denounced Catholicism as "dangerous," now is quoted as saying: "I'm thrilled with the new pope moving the Church in the right direction." Click here for the (depressing) story.

Pray for the Church – and for me.