Matt C. Abbott
'Heroism and Genius'; 'What DID Jesus Do?'

November 29, 2017
Below is a portion of the introduction to Father William J. Slattery's new book Heroism and Genius: How Catholic Priests Helped Build – and Can Help Rebuild – Western Civilization, which has been endorsed by Cardinals Robert Sarah, Raymond Burke, and Walter Brandmüller, as well as Catholic authors Thomas Woods, Ph.D., and Michael D. O'Brien.

Excerpt from the Introduction to 'Heroism and Genius' 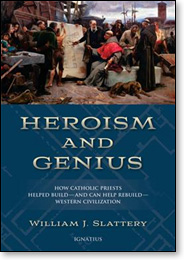 Heroism and Genius has three parts.

Part 1 has a triple objective. Firstly, it sketches an overview of recent conclusions among historians regarding the Church's role in the forging of Western civilization. Secondly, it explains what exactly this book means when it asserts that Catholic priests were its constructors. Thirdly, it lays out the milestones in the saga from circa A.D. 200 through circa A.D. 1300.

Part 2, comprising chapters 2 through 5, describes the gradual shaping from A.D. 300 to A.D. 1000 of the embryo of medieval Christendom: the sociopolitical-cultural unity that was at the heart of Western civilization.

Chapter 2 is an introduction to the Dark Ages, sketching the role of the Church against the background of the collapse of the Western Roman Empire and the massive immigration-invasion of the barbarians.

Chapter 3 presents the four priests who can arguably be described as "Fathers of Western Culture" (Christopher Dawson) – Ambrose, Augustine, Leo the Great, and Gregory the Great – in whose footsteps numerous bishops followed, shouldering society in the midst of the semianarchy that reigned especially from the fifth to the seventh centuries.

Chapter 4 introduces firstly the role of Saint Benedict and the Benedictine monks who, through the genius of their monastic Rule, played a key role in forming the Western mindset; secondly, it shows the under-the-radar importance of the interior revolution triggered by Columbanus and the Irish monks through their spreading of the Irish method of confession; and thirdly, it singles out one Benedictine, Boniface, who became the chief planter of the seeds of Western civilization in Germany.

Chapter 5 deals with the role of Alcuin and his associates as architects of the sociopolitical and cultural framework of Charlemagne's empire, a tentative and faltering ninth-century precursor – "the baby figure of the giant mass of things to come" (Shakespeare, Troilus and Cressida) – of medieval Christendom from the twelfth to the fifteenth centuries, Western civilization with its distinctively Catholic ethos.

Part 3, comprised of chapters 6 through 10, aims to show the decisive role of priests in the building of some of the landmark social, artistic, and economic institutions that mark Western civilization as both original and originating in the Catholic matrix.

Chapter 6 sketches the role of the "ancient rite," the traditional form of the Mass that functioned as the chief channel of Catholicism for the creation of the culture of Christendom.

Chapter 7 outlines how medieval chivalry, conceived amid cloisters, not only tamed the savagery of the barbarian warrior class but also configured the ideal of Western manhood.

Chapter 8 shows how the priesthood led the way in bringing about a new and sublime idealism of womanhood, unprecedented in world history, prompting a culture of romanticism that still lingers in the air of the West.

Chapter 9 presents natural offspring of Catholicism – Gothic architecture and Gregorian chant – and the hearts and minds of the men behind them, especially the "Father of Gothic," Abbot Suger.

Chapter 10, "Founders of Free Enterprise Economics," sketches the Catholic worldview from which key features of the free-market system emerged, points to its first monastic incubators, and portrays some of the Renaissance priests whose genius unfolded its principles.

The conclusion, "Standing on the Capitoline," briefly speculates on the meaning of these achievements for those who stand amid the ruins of Western civilization, living under a now-dominant post-Western secularized world order, but determined to play their role in building another Christian civilization worthy of humanity.

The thrust is always fourfold: firstly, to outline how certain foundational paradigms, ideals, and institutions of sociocultural life in Western civilization were derived from Catholicism; secondly, to paint miniature sketches of the priests who were largely responsible for making this happen – sketches, not portraits, because I am very conscious that these do not offer the richness of detail and color of a more finished painting (still, I hope that they will enable the reader to be fascinated enough to want to continue getting to know these individuals); thirdly, Heroism and Genius endeavors to highlight what made these priests "tick": their world vision, aspirations, motivations, and lifestyle.

This last dimension is missing from many history books that give coverage instead to sociopolitical events that explain how, but not fully why, Western civilization was born. But "what is essential is invisible to the eye" (Antoine de Saint-Exupery). How can you possibly understand events without piercing to some degree the souls of the men involved?

The fourth driving motive seeks to point out, on the basis of yesteryear's achievements and with an eye on the immediate future, the role of Catholics, and particularly of priests, in civilization building.

The hour has already struck, and we have awoken to the fact that we now live in a post-Western secularized civilization that is not only anti-Christian in its culture but indeed antihuman due to its agenda to redefine the individual person in defiance of nature.

Although "Christendom is not the description of an ideal state but of an accepted ideal" (George MacLeod) it was an ideal and still is an ideal, one from which we can learn in order to emulate the grandeur and avoid the errors.

And now is the time to rouse our intellects, consecrate our energies, and channel our passions in the thrust toward the creation of a Christian culture that will protect all that is true, good, and beautiful for the sake of every man and woman.


Below is the foreword (written by Catholic radio personality Al Kresta) to Thomas J. Nash's new book What Did Jesus Do?, which has been endorsed by Father Mitch Pacwa, S.J., Ph.D., Colin Donovan, S.T.L., and Father John Paul Mary Zeller, M.F.V.A., of EWTN.


Foreword to 'What Did Jesus Do?' 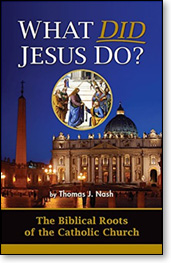 What Western Christians call "denominationalism" didn't exist before the so-called Reformation of 1517. By 1600, however, the various reform movements had deteriorated into a cacophony of competing confessions (denominations), sustained and enforced by the power of states which rivaled one another and often longed to usurp the prerogatives of the papacy.

Tom Nash knows that this creedal competition was not Jesus' will for his Church. He works hard to avoid demonizing polemics and labors to settle the argument by appealing to our Protestant brothers and sisters on our common ground of Scripture. He is confident that Jesus can settle the argument.

To that end, he asks what kind of Church did Jesus intend to build? What materials were used to construct it? How does he currently govern it? This rich encounter with the Church of the Scriptures results in "Aha" after "Aha" moment. Nash demonstrates that Jesus didn't perform a bait and switch, promising a kingdom and then delivering a cheapened, fraudulent facsimile called "the church." The Church wasn't an afterthought, a mere pragmatic association of Jesus people. Rather, Jesus, from the beginning, willed the Church to be the center of human history and the Eucharistic Sacrifice to be the center of ecclesial identity and worship.

Nash's arguments are carefully constructed, well-organized and delivered in fresh, lively prose that trusts the Church's founder to mean what he says. Catholics will be reinforced in their faith and stretched in their spiritual imaginations. They may have never considered such a grand vision of the Church. But non-Catholics will also be grateful for this engagement of Scripture that clears up misconceptions and can only lead to more honest and fruitful relations between Catholics and the "separated brethren."

Buy it, read it, share it during this five-hundredth year since the unity of Western Christendom was ruptured and sizeable communities of Christians hardened into denominations. You never know what you might contribute to reunion.

– Al Kresta, president and CEO of Ave Maria Radio and host of the internationally syndicated talk-radio program 'Kresta in the Afternoon'