May 15, 2018
Below is an excerpt from The Art of Forming Young Disciples: Why Youth Ministries Aren't Working and What to Do About It (2018), by Everett Fritz. Thanks to Sophia Institute Press for allowing me to publish this excerpt in my column. Click here to order a copy of the book directly from the publisher.

The Lack of Orthodoxy in Catholic Schools

There's another layer to the problems in Catholic education: lack of orthodoxy. Orthodoxy means "right teaching." When we say that a teaching is orthodox, we mean that it reflects the consistent teachings of our Catholic Tradition and the authority of our bishops. 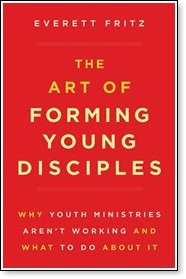 After Vatican II, there was a significant rebellion within the Catholic Church. Many priests, nuns, religious, and even some bishops dissented from the traditional teachings of the Church. They were dissatisfied that the Church had not changed several doctrines – largely doctrines on sexuality. Dissenters found a safe haven in seminaries and Catholic universities – the two major institutions of Catholic higher education.

The effect of this conference on the Catholic identity of primary and secondary Catholic schools was catastrophic. With the majority of lay teachers being educated at these universities, it became difficult to find teachers who were capable of teaching and witnessing the "right teachings" of the Catholic Church.

Catholic education went through a crisis of faith for several decades and even still feels the effects of this great Catholic dissent.

The lack of fidelity in Catholic universities has had a trickle-down effect into primary and secondary Catholic education. With fewer and fewer priests and nuns teaching in classrooms, Catholic schools had to pull teachers from somewhere. This meant that many students who had been formed in dissenting Catholic-university environments became teachers in primary and secondary Catholic schools.

This lack of orthodoxy, more than anything else, has contributed to the train wreck that is Catholic education.

Reform in Catholic education has been occurring, but it will be several more decades before we see a full, positive reform. Franciscan University of Steubenville, Benedictine College in Kansas, and Ave Maria University in Florida (to name a few) are dynamic Catholic universities that are orthodox and incorporate Catholic identity into every facet of their schools. The Cardinal Newman Society publishes a list of Catholic universities whose theology faculty take an oath of fidelity to the teachings of the Church and to their local bishop. The list is growing, as is high-quality campus ministry at both Catholic and state colleges, promoted by organizations such as FOCUS.

I am an alumnus of Franciscan University of Steubenville. I was blown away by my experience of formation and education on the campus. The chapel for daily Mass was full three times a day. So was the Perpetual Adoration Chapel. In fact, to avoid the crowds at the campus's Adoration Chapel, many students attended Eucharistic Adoration off campus or went to Blessed Sacrament chapels in their dorms. Missionary work – in town, domestic, and foreign – was a regular part of many of the students' lives.

Students' pastoral needs were met through a variety of ministries – most notably the household system. Developed by Fr. Michael Scanlon, TOR, the "household system" was a reformed fraternity/sorority structure in which students shared their lives communally with one another. These communities were committed to patron saints, apostolates, accountability, virtue, and prayer.

The first time I visited Franciscan University, I noticed that there were no false appearances on the campus. Students lived their Faith and supported one another. Each faculty and staff member was hired with the intention of putting Catholic witnesses in front of the students. Even maintenance workers were regulars at daily Mass on campus. Prayer was a way of life, and older students – who had matured in their Christian witness as a result of their environment – supported younger students.

Disciples make disciples. We cannot expect to form youth into lifelong disciples of Jesus Christ unless we put them into relationships with people who are already disciples. It is not enough for a school to hire a few good religion teachers or a campus minister, or to have a few priests teaching on campus. Every person a student encounters on school property must be actively trying to be a Christian witness. When a student is saturated in Catholicism as a lived experience, he cannot help but be formed by those experiences.

More and more faithful Catholic universities are popping up around the country, and it is having a trickle-down effect in the worlds of secondary and primary education. Because many secondary and primary schools are run directly by dioceses (and therefore are under the care of the local bishop), making dramatic changes in Catholic schools is not in principle difficult. There is still hope for this model and signs of life within these schools.

I would never suggest that the Catholic Church abandon her efforts in education. There's too much history and too much potential for evangelization in Catholic schools. Rather, I want Catholic education to reclaim its identity.

Catholic education has always been set apart in its approach to formation. It is supposed to make virtues, prayer, art, music, liberal arts, service, and physical activity vital components of the education process. True Catholic education should form the worldview of a young mind.

It isn't simply about having a religion class, service hours, or liturgies available for children. Catholicism can and should be taught in every subject. For example, Church history can be taught within history classes. I never knew that the French Revolution was a direct attack on Catholicism until I studied it in a truly Catholic college. I didn't even know what Freemasonry was. In junior high in a Catholic school, I had been taught that the French Revolution was a good thing. That's a result of the school's failure to integrate Catholicism into every class.

Catholics have long been creating influential works in literature, art, and music. Catholicism has a long history of scientific discovery, which can be introduced in the study of science. Philosophy should be a part of all Catholic education. Students should come out of a Catholic school with the ability to think and to reason. This is necessary for a virtuous person.

Many Catholic schools talk about forming the whole person, but few actually do it, although the numbers of those that do so are increasing. In Denver, where I live, a poor Catholic school was on the brink of closure. The pastor fought hard to keep the school open and hired a principal to implement a classical curriculum for the school, focusing on the great literary works of different eras, the study of languages and philosophy, and integration of the arts into daily life. The pastor worked hard to provide students with financial aid so that no one would be turned away and they could keep the school open. The principal hired new, young teachers who actively lived their Faith and were capable of teaching a classical education. The doors of the school stayed open, and the school soon added a Montessori preschool.

Word spread in the Catholic community, and strong Catholic families began recruiting for the school. Soon many of the local homeschooling families put some of their children in the school. In a few short years, the student body more than tripled, and the school had a waiting list for admission. Now this school, once on the verge of closing, is doing a capital campaign so it can expand. The Catholic community of families within the school is amazing, and the parish is reaping benefits, too.

I had the opportunity to run a few youth-ministry activities in its junior high. I've never been more impressed with the quality of young disciples. There were no cliques (in fact, most of the students were comfortable with students of all ages). There was no drama. The teachers were genuinely interested in the lives of their students, and they all appeared to be cut from the same cloth. The students sought out the Lord in their young prayer lives. They were mature, articulate, and virtuous. I spent time with students outside the classroom and even in some of their homes. They were the same kids in each of those environments. Not all of this can be attributed to the school. After all, the school was actively trying to recruit good Catholic families. But this was a Catholic school that I can honestly say forms young disciples.