September 15, 2018
Many of my readers know I've been following and writing about the unsolved murder of Father Alfred Kunz for a number of years. Catholic World Report recently published an excellent three-part series of articles on the case – click here, here and here to read them – written by Joe Hanneman (and contributed to by me).

From the CWR story:

The most controversial part of the investigation came in March 2000 when then-Sheriff Gary H. Hamblin announced that Father Kunz had 'intimate' relationships with women. Police have never identified the alleged paramours, or defined what they meant by the term 'intimate.' Hamblin suggested reporters refer to Webster's dictionary, which includes definitions ranging from 'a very close relationship' to 'involving sex or sexual relations.' Investigators said jealousy, anger, infidelity, or betrayal could be a motive for the murder.

[Sheriff David J.] Mahoney said no one wants to harm Kunz's reputation, but these kinds of 'difficult interview conversations' are a necessary part of solving the case. Investigators corroborated statements from women, at least one of whom was married, stating they had intimate relationships with the priest.

'We would not release allegations that could not be corroborated,' Mahoney said. 'When we talk about Father Kunz having been involved in intimate relationships, it's because those statements have been corroborated. And I don't mean somebody said somebody engaged in that kind of behavior. Somebody admitted to being involved in those relationships.'


It's not clear exactly how investigators initially found out about these alleged relationships, but the Dane County Sheriff's Office has always been adamant that they occurred. One investigator told journalist Chuck Nowlen years ago: "Oh yeah, there were several of them. Yeah, there's no doubt about it at all."

More recently, in March 2018, when the sheriff's office conducted a social media campaign on the case, Mahoney emphatically told a local television station that the intimate relationships "are the facts of the case."

If you prefer, you can set up a temporary, anonymous and free email account to send me information (but please don't delete the account right after you send me the information; wait until I respond at least once). Just make sure to include enough detail so I can be reasonably certain you're being truthful.

Assuming these women actually exist and are still living, I'd like to see if one or more of them will contact me. 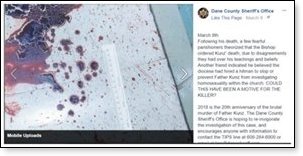 "Large amounts of money had been moved between parish accounts in the months before the murder, and some large checks were cut, police said."


If anyone has solid information about who was receiving these large checks and why they were receiving them, please let me know.

Thank you and God bless!