March 4, 2019
This is the 21st anniversary of the unsolved murder of Father Alfred Kunz, a priest and canon law expert of the Diocese of Madison, Wis. He was known for celebrating the Traditional Latin Mass and the Novus Ordo Mass as the longtime pastor of St. Michael Catholic Church, located in rural Dane, Wis. He had a good reputation among many (but certainly not all) Catholics and was known to be staunchly pro-life.

In the mid-to late-1990s, Kunz was an adviser to Illinois Catholic activist Stephen Brady, founder of Roman Catholic Faithful. Brady was instrumental in exposing clergy corruption in the Diocese of Springfield, Ill., including that of the late Bishop Daniel Ryan, who resigned in disgrace in 1999. 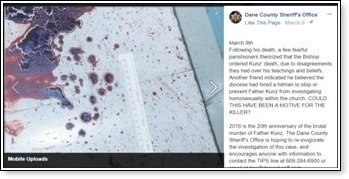 On the morning of March 4, 1998, Kunz was found in a large pool of blood, brutally murdered, in the hallway of the school attached to his parish. His throat had been cut. There have been various theories put forth as to the killer's motive, some more plausible than others.

One theory, promoted by the late author Malachi Martin, is that Satanists committed the murder. The Dane County Sheriff's Office appeared to dismiss that theory early on in the investigation. Coupled with that theory is the claim that there were various symbolic mutilations on Kunz's body, which was unfounded.

Another theory is that the murder might be related to Kunz's alleged affairs with women at the parish. I've never come across any of these women, nor, to my knowledge, have other journalists. However, the sheriff's office has said that the affairs, at least two of which supposedly involved sexual contact, were corroborated, and the related motive – someone's anger at one or more of the affairs – is still in play.

Yet another theory involves an interrupted burglary. Also of note: It was determined that financial irregularities were discovered to have occurred at the parish in the weeks prior to Kunz's murder. The sheriff's office hasn't publicly released specific details of the irregularities, other than to say that large amounts of money had been moved between parish accounts and some sizable checks were cut.

For several years, the most prominent theory was that the male teacher who discovered Kunz's body, Brian Jackson, committed the murder. Jackson, who reportedly had a strained relationship with Kunz in the weeks leading up to the murder, seemingly had a close relationship with another priest, Father Charles Fiore, who was a good friend of Kunz. Jackson has been ruled out as a suspect, according to the sheriff's office. He's never granted an interview with any media outlet, speaking only briefly in person to a reporter from the Milwaukee Journal Sentinel to say "he is innocent and believes the investigation was waylaid by the fact detectives spent so much time on him." 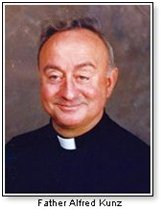 The sheriff's office has also asserted that the principal of St. Michael School at the time of Kunz's murder, Maureen O'Leary, has been uncooperative and even told investigators to close the case and mark it unsolved. In a 2018 interview with Catholic writer Joseph M. Hanneman, she denied being uncooperative, insisting that she talked with investigators on several occasions.

Schaffer responded, "Our detectives say the persons of interest do not generally move in the same circles."

Is it possible that any of the persons of interest might kill again, I asked.

"Anyone's guess. Anything is possible," she responded.

In August 2018, the aforementioned Joseph M. Hanneman had published a three-part series of articles on the case (contributed to by me) at the website of Catholic World Report.

Also, the website of the Milwaukee Journal Sentinel is currently running a podcast series on the case. I was interviewed for the series last year.

A version of the above column originally appeared in 2018 at ChurchMilitant.com. This column reflects current information pertaining to the case. Anyone with legitimate, specific tips about Kunz's murder should contact the Dane County Sheriff's Office at 608-284-6900, or email tips@danesheriff.com.