June 6, 2019
A new book by Dr. Taylor R. Marshall has elicited strong, divergent reactions from concerned Catholic writers, including Dr. Jeff Mirus, co-founder of Christendom College and founder of Trinity Communications and CatholicCulture.org; and Julia Meloni, who holds a bachelor's degree from Yale and a master's degree from Harvard.

On May 31, Mirus published a rather scathing review of Marshall's book at CatholicCulture.org (excerpted; click here to read Mirus' review in its entirety):

To my great sadness, Sophia Institute Press has just published Taylor R. Marshall's Infiltration: The Plot to Destroy the Church from Within. The publisher is offering it under its 'CRISIS Publications' imprint, designed to address problems 'with clarity, cogency, and force' through books that are 'destined to become all-time classics.' Infiltration is certainly an all-time classic...in the category of conspiracy theories.

It is hard to know where to begin a review, since discussing the book is rather like pointing out the absurdity of a crazy relative who always has an answer to every objection, pulled out of a world that exists only in his head. The fundamental stupidity of the book arises from the author's felt need to explain the normal human condition in terms of a series of conspiracies....

In the midst of this inescapable jumble, Taylor Marshall has offered readers a rehash of the same tired Traditionalist narrative which instantly – but deceptively – puts him and his allies in the right. He even has all the same tired old heroes, like Cardinal Ottaviani (who famously opposed Paul VI on the matter of liturgical reform, after having caused John XXIII to retreat from Rome occasionally just to escape the constant neo-scholastic nitpicking) and Archbishop Lefebvre (who famously launched an allegedly superior Catholic movement rooted in disobedience to the Vicar of Christ).

I have been told that many people encouraged Sophia Institute Press to publish this book, with only a few dissenting voices (mine, for one), but this can only mean that Sophia is far more firmly rooted in Traditionalism than its previous offerings had led us to believe, and that most of those invited to give an opinion were from that single camp.

At the very end, the book includes a list of the alleged members of the 'Infiltration Launch Team' who are said to have read the book prior to publication and to be helping in promotion. It may be an unprecedented step in publishing, since I estimate the number of names at over 2,000. But again, from what pool of desperate predisposition were these people drawn? When a book this obviously bad is touted as sure to become an all-time classic, something is terribly wrong with the whole process.


Julia Meloni has a far different opinion of Marshall's book.

In a June 4 article at Crisis, Meloni wrote (excerpted; click here to read her review in its entirety): 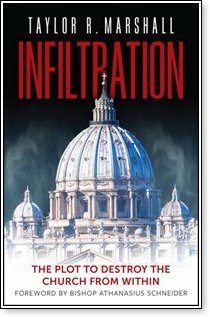 original research into the mysterious center of gravity known as St. Gallen, Switzerland, Marshall convincingly shows that the sparks of Church crisis far predate both Pope Francis and Vatican II....

In his foreword, Bishop Schneider states: 'As Pope Leo XIII noted when he opened the secret Vatican Archives, in researching and exposing historical facts – even if they are compromising and troubling – the Church has nothing to fear.' Marshall's book thus grapples with many disconcerting pieces of information: testimony alleging that the main architect of the Novus Ordo Missae, Archbishop Annibale Bugnini, was a secret Freemason; evidence that the liturgy under his leadership was Protestantized; proof that the controversial Vatican II document Nostra Aetate was masterminded by a man who ultimately left the priesthood and lived as an openly homosexual crusader for 'gay rights'; and evidence that numerous other theological engineers of Vatican II were suspected of Modernism under Pius XII....

Recalling Pope Francis's subversive statements on conscience and an allegedly God-willed 'diversity of religions,' Marshall says the revolutionaries finally have a pope whose philosophy 'is essentially that of a nineteenth-century member of the Freemasonic Carbonari.' Under Infiltration's capacious gaze, the Francis pontificate thus emerges as the unsurprising outcome of a long history of corrupting ideas. Surveying that historical genealogy equips us to better recognize the errors flourishing under this pontificate – and to vigorously resist them.


Tom Allen, director of marketing for Sophia Institute Press, provided me with the following statement:


I'm sorry that Dr. Mirus is so sad about our publishing Infiltration, which endeavors to make sense of the problems facing the Church in our time. Dr. Marshall's work is an important contribution to those honestly seeking answers to the roots of the present crisis. It is well presented, well supported, and insightful. In Infiltration, Dr. Marshall offers a compelling narrative that documents the growing ascendance of secularism within the Church over the past century. In fact, his narrative makes sense of the bizarre problems that have dominated Church news and that have sadly undermined the moral authority of our bishops and priests at a time when we need them most.


Below are the titles of the book's chapters and appendices. Click here to order a copy of Infiltration directly from the publisher.

6. Infiltration of the Church by Secret Societies and Modernism, p. 41

9. Communist Infiltration of the Priesthood, p. 83

25. Infiltration and the Mysterious Death of John Paul I, p. 171

29. Infiltration and the Plot against Benedict XVI, p. 213

30. Infiltration of the Vatican Bank and the Butler of Pope Benedict XVI, p. 217

31. Infiltration and the Election of Pope Francis, p. 223

Both Versions of the Secret of La Salette, p. 275

Dates of Indults for Communion in Hand, p. 291

Timeline of the Life of Ex-Cardinal McCarrick, p. 293