October 14, 2019
I asked Father Frank Pavone, national director of Priests for Life, for his take on a recent Fox News Poll showing that 51 percent of voters want President Trump "impeached and removed from office, another 4 percent want him impeached but not removed, and 40 percent oppose impeachment altogether."

The Democrats don't want their members on record about impeachment because they know it will be politically devastating for many of them in their home districts.

Readers would do well to read carefully the letter sent by the White House Counsel to the Congressional leadership, outlining why the so-called 'impeachment inquiry' is illegal, unconstitutional, and violates due process and bipartisan practice.


To quote from the letter, addressed to Congressional Democrats,

As you know, you have designed and implemented your inquiry in a manner that violates fundamental fairness and constitutionally mandated due process. For example, you have denied the President the right to cross-examine witnesses, to call witnesses, to receive transcripts of testimony, to have access to evidence, to have counsel present, and many other basic rights guaranteed to all Americans. You have conducted your proceedings in secret. You have violated civil liberties and the separation of powers by threatening Executive Branch officials, claiming that you will seek to punish those who exercise fundamental constitutional rights and prerogatives. All of this violates the Constitution, the rule of law, and every past precedent. Never before in our history has the House of Representatives-under the control of either political party-taken the American people down the dangerous path you seem determined to pursue.


I wonder what those answering the poll would think of an 'investigation' into someone that did not allow the person being investigated to defend himself?

The Democrat leaders have been guilty of this kind of political charade since the day the president was elected. They have shown their lack of concern for due process, integrity and honesty in the Russia hoax, the Kavanaugh confirmation process, and numerous other shams.
Again, from the letter,

The House's failure to provide co-equal subpoena power in this case ensures that any inquiry will be nothing more than a one-sided effort by House Democrats to gather information favorable to their views and to selectively release it as only they determine. The House's utter disregard for the established procedural safeguards followed in past impeachment inquiries shows that the current proceedings are nothing more than an unconstitutional exercise in political theater.


And as David Bossie points out in a recent op-ed,

At the end of the day, the Democrats in charge of the U.S. House of Representatives are running a political smear campaign against the duly elected president of the United States and trying to convince the American people that it's a legitimate impeachment inquiry. This won't work.


As to the question of why pro-lifers should continue to support Trump, Pavone answered: 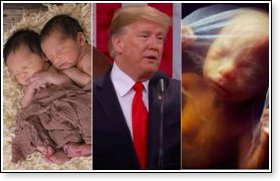 Because he is delivering for us: taking billions of dollars away from the abortion industry, filling the federal courts with pro-life judges, implementing pro-life policies in every department of the federal government, and much more.

In fact, the politicians and the party who are trying to remove him are doing so precisely because they realize the threat he poses to the abortion industry, with which the Democrats are in bed. Indeed, one can say that the reason the fake 'impeachment inquiry' is happening, and the reason pro-life people have to continue supporting the president, are in fact the same.