Matt C. Abbott
'Infiltration and the election of Pope Francis'

November 8, 2019
Below is an excerpt (not including footnotes) from the 2019 book Infiltration: The Plot to Destroy the Church from Within, by Dr. Taylor Marshall. Thanks to Sophia Institute Press for allowing me to publish this excerpt in my column. Click here to order a copy of the book from SpiritDaily.com.

I saw also the relationship between two Popes. I saw how baleful the consequences of this false church would be. I saw it increase in size; heretics of every kind came into the city of Rome. The local clergy grew lukewarm, and I saw a great darkness. Then the vision seemed to extend on every side. Whole Catholic communities were being oppressed, harassed, confined, and deprived of their freedom. I saw many churches closed, great miseries everywhere, wars and bloodshed. A wild and ignorant mob took violent action. But it did not last long.... Once more I saw that the Church of Peter was undermined by a plan evolved by the secret sect [Freemasons], while storms were damaging it. But I saw also that help was coming when distress had reached its peak. I saw again the Blessed Virgin ascend on the Church and spread her mantle. 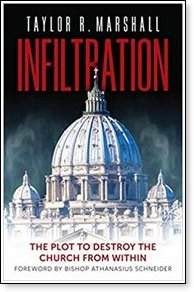 As instructed, the cardinals gathered in the Eternal City for the election of the next pope during a conclave lasting from 12 to 13 March 2013. To the wonderment of the cardinals, a valid pope left the See of Peter vacante, and while still living, called them to elect another. There were 207 cardinals during the sede vacante, with being under the age of eighty and eligible to vote. Only 115 participated because Julius Cardinal Darmaatmadja of Indonesia was prevented by the deterioration of his eyesight and Keith Cardinal O'Brien of Scotland because of his admitted sexual misconduct with priests.

On the first ballot of 12 March, the unsubstantiated and alleged leaders were subsequently reported by La Repubblica as:


Cardinal Scola was seen as a safe conservative to follow in the way of Benedict XVI. After two ballots the following morning, no progress was made, and Cardinal Ouellet allegedly asked for his supporters to transfer their votes to Cardinal Bergoglio in succeeding ballots. Theoretically, this would hold Scola at 35 votes and Bergoglio at 35 votes. That afternoon, on the fourth ballot, Bergoglio had the majority (more than 58 votes) but not yet the 77 votes required to capture a two-thirds majority.

On the fifth and final ballot, the cardinals coalesced around the clear leader. Bergoglio received 90 votes (13 more than necessary). According to Seán Cardinal Brady of Ireland, applause broke out during the tallying of votes when Bergoglio's count reached the 77 votes.

At 7:06 p.m. Italian time, white smoke plumed from the Sistine Chapel, and the sounding of the bells indicated that the cardinals had successfully elected a pope. Bergoglio appeared unceremoniously on the balcony of Saint Peter's as Pope Francis, and in a reversal of roles, he asked the people below to pray for him. Standing next to him was Cardinal Danneels, the man who had admitted to the existence of a "mafia" to elect Bergoglio. Cardinal Murphy-O'Connor, also a member of the Sankt Gallen Mafia, told La Stampa and the Independent that, "Four years of Bergoglio would be enough to change things." Subsequently, even Cardinal McCarrick confessed that an "influential Italian gentleman ... a very brilliant man, very influential man in Rome" visited him at the seminary where McCarrick was staying in Rome and said, "What about Bergoglio?... He could do it, you know, reform the church." And so McCarrick promoted the cause of Bergoglio among the cardinals prior to the election.

Mission accomplished for the Sankt Gallen Mafia: at last they delivered to the world a "Revolution in Tiara and Cope" as had been prophesied by the Freemasonic document Alta Vendita more than 150 years before. After a slow, patient revolution, they had secured "a Pope according to our heart; it is a task first of all to form for this Pope a generation worthy of the kingdom that we desire."

The Problematic Teachings of Pope Francis

After Pope Francis was elected on 13 March 2013, things moved rapidly. On 15 June 2013, Pope Francis appointed Monsignor Battista Mario Salvatore Ricca – who allegedly carried on a homosexual affair with the captain of the Swiss Guard – as prelate of the Vatican Bank (IOR). In July 2013, the money laundering case against former Vatican Bank chief Gotti Tedeschi was suddenly dropped. The pontificate of Pope Francis has been documented in detail by others and represents a strong shift toward ecumenism, globalism, immigration, and socialism. His encyclicals and teaching stress environmentalism (Laudato si'), the redistribution of wealth by governments, a relaxation of sexual morality, and a supreme emphasis on following one's conscience over and above Catholic dogma.

Pope Francis's Amoris laetitia sparked considerable criticism for stating "No one can be condemned forever, because that is not the logic of the Gospel! Here I am not speaking only of the divorced and remarried, but of everyone, in whatever situation they find themselves." The statement entails that hell is not eternal – a doctrine taught by Giordano Bruno, whose statue had been erected in Rome just a century before. The pope's Amoris laetitia also opened the way for civilly divorced and remarried Catholics to receive absolution and Holy Communion while remaining sexually active. On 19 September 2016, four cardinals, the Italian Carlo Caffarra, the American Raymond Burke, and the Germans Walter Brandmüller and Joachim Meisner, formally sought clarification from the pope regarding what appeared to be heretical teaching. The pope did not respond to their dubia.

Pope Francis has explicitly stated that God wills for some to break the moral law when they cannot reach the ideal. Pope Francis also has taught that God divinely and wisely wills the "diversity and plurality of religions" with the same will "by which he created human beings." Pope Francis also endorsed the 2030 Plan of the United Nations regarding environmentalism, reproductive rights, and population control. His worldview and the philosophy is essentially that of a nineteenth-century member of the Freemasonic Carbonari.

Saint Pius X would have placed Pope Francis under the ban of Modernism. How can we have two popes in theological contradiction?

6. Infiltration of the Church by

22. Archbishop Lefebvre and the Traditionalist Resistance . . . 155

28. Ratzinger versus Bergoglio in the

30. Infiltration of the Vatican Bank and