March 10, 2020
The following are excerpts from The Fruits of Fatima: A Century of Signs and Wonders, by Joseph Pronechen. Thanks to Sophia Institute Press (publisher of Dr. Taylor Reed Marshall's bestseller Infiltration, among many other good Catholic books) for allowing me to publish these excerpts in my column. Click here to order a copy of The Fruits of Fatima directly from SIP. 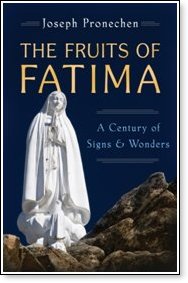 Let's begin with the biggest wonder of all – the Miracle of the Sun, which was foretold by our Blessed Mother. The phenomenon not only reached the seventy thousand people at the Cova, but it has also reached across the decades to all of us. Father Ignacio Lorenco was, at the time, a nine-year-old in a village eleven miles away. He described how the village children were outside and witnessed "the great Miracle, which one could see quite distinctly from the top of the hill where my village was situated." The sun, he said, "suddenly seemed to come down in a zigzag, menacing the earth. Terrified, I ran and hid myself among the people, who were weeping and expecting the end of the world at any moment."

Many nonbelievers converted that day. Father Lorenco noted, "Near us was an unbeliever who had spent the morning mocking the simpletons who had gone off to Fatima just to see an ordinary girl. He now seemed to be paralyzed, his eyes fixed on the sun. Afterwards he trembled from head to foot and, lifting up his arms, fell on his knees in the mud, crying out to Our Lady."

Father Lorenco said that people were asking God to forgive their sins. "We all ran to the two chapels in the village, which were soon filled to the point of overflowing. During those long moments of the solar prodigy, objects around us turned all the colors of the rainbow. We saw ourselves blue, yellow, red, etc....When the people realized that the danger was over, there was an explosion of joy, and everyone joined in thanksgiving and praise to Our Lady."

Of course, most of the observers were at the scene – armies of eyewitnesses at the Cova da Iria, tens of thousands of them, fourteen times the population of the city of Leiria (which would be reestablished as a diocese three months later). Let's take a quick look at a few descriptions that set the scene.

Jacinta and Francisco's father, Ti Marto, said it was most extraordinary that the sun didn't hurt their eyes. "Everything was still and quiet, and everyone was looking up. Then at a certain moment, the sun appeared to stop spinning. It then began to move and to dance in the sky until it seemed to detach itself from its place and fall upon us. It was a terrible moment."....

Dr. Almeida Garret, a professor from Coimbra University, described the vision in vivid detail, from the sun looking like "a glazed wheel made of mother-of-pearl," to noting that it "spun round on itself in a mad whirl. Then, suddenly, one heard a clamor, a cry of anguish breaking from all the people. The sun, whirling wildly, seemed to loosen itself from the firmament and advance threateningly upon the earth, as if to crush us with its huge and fiery weight. The sensation during those moments was terrible."

Looking at the horizon, Garret reported seeing everything and everybody appearing the color of amethyst. He also said, "Fearing impairment of the retina, which was improbable because then I would not have seen everything in purple," he turned around and, with his back to what he had witnessed, opened his eyes and saw "that the landscape and the air retained the purple hue."

As the moments went on, he "heard a peasant nearby say, 'This lady looks yellow.' As a matter of fact, everything far and near had changed now. People seemed to have jaundice." He looked at his hands, and they, too, looked yellow.

More than the color change was the change in so many hearts, something even the somewhat anticlerical Lisbon newspaper couldn't help but report. It described the event with respect, even awe at times, mentioning how the spectators were shouting, "A miracle! A miracle!" The account also recalled the reverence of an elderly man: "With his face turned to the sun, he recited the Credo in a loud voice.. .. I saw him afterwards going up to those around him who still had their hats on and vehemently imploring them to uncover before such an extraordinary demonstration of the existence of God."

Then, after the Miracle of the Sun, there followed right away another phenomenon. When people had arrived at the Cova, they were drenched by the pouring rain that had gone on for hours. The ground was a sea of mud. Yet, once the miracle ended and the sun resumed its normal place in the sky, everybody's clothes were perfectly dry, and the mud was no more. Heaven had taken care of everything. Like a good mother who wants her children dry on a rainy day, Our Lady surely had a hand in seeing that all her children were provided for.

Other phenomena added to the intense spiritual atmosphere. It's as if these added wonders were also witnesses to and echoes of heaven's visit....

While countless spiritual healings took place at Fatima, especially during and after the Miracle of the Sun, there were physical healings too, such as one reported on June 18, 1918, by Father Manuel Antunes Marto to the archbishop. It concerned one of his parishioners, Maria do Carmo, of the parish of Our Lady of Light in the Diocese of Coimbra, in the district of Leiria. Father Marto had received a statement from Maria concerning her cure from tuberculosis....

After the healings started in Fatima, people arrived every day to get some of the earth from the Cova near the spot of the apparitions. They came hoping for cures of physical ailments and of all sorts of other problems. Many made pilgrimages during the 1918 influenza pandemic that was sweeping the world. Either they were already sick, or they were frightened of catching this deadly flu.

Maria related that the people would process with images of Our Lady of the Rosary and of their favorite saints. A priest named Friar David from nearby, whom Maria called a wise and good man, came and gave the first sermon at the Cova. In it, he stressed that the important thing to pursue was "amendment of life." Already very sick, Jacinta was present at the Cova on that day.

"[The] people were weeping in sorrow over this epidemic. Our Lady heard the prayers they offered," Maria told Father de Marchi, "because from that day on, we had no more cases of influenza in our district." From then on, as you might expect, devotion to Our Lady of Fatima grew even greater, and after the chapel was built, thousands and thousands more came. The people took away spoonfuls of earth in handkerchiefs or in paper, and later they were able to make use of another vehicle for healing – water found in the Cova....

Cures connected to Fatima began to happen on an international scale, too, years after the apparitions. Everybody has surely heard of this next person who attributed his healing to Our Lady of Fatima: St. Padre Pio.

While countless people know of him, few know that he was very seriously ill, bedridden, and Our Lady of Fatima visited him at San Giovanni Rotondo to cure him. She made this special trip to help a favorite son who was thoroughly devoted to her Fatima messages....


Excerpt from Chapter 3
St. Joseph, the model of fatherhood, is also part of the Fatima apparitions. When the one hundredth anniversary of Fatima was celebrated in 2017, many people renewed their acquaintance with the Miracle of the Sun, and many others may have heard about it for the first time. But few realize that during the October 1917 apparition, St. Joseph also appeared.

Lucia described this blessed appearance in her memoirs: "After Our Lady had disappeared into the immense distance of the firmament, we beheld St. Joseph with the Child Jesus and Our Lady robed in white with a blue mantle, beside the sun. St. Joseph and the Child Jesus seemed to bless the world, for they traced the Sign of the Cross with their hands."

The Holy Family's presence at the last Fatima apparition is a timely reminder for today's families and a timely reminder of the importance of St. Joseph himself. We forget St. Joseph too often, but we should correct that. Fatima is a reminder to call on him frequently – daily, in fact. After all, he is the foster father of Jesus, the head of the Holy Family. His name appears in the Canon of the Mass, and, after our Blessed Mother, he is the greatest of all saints and angels.

Among its other meanings, Fatima is a reminder of the importance of fatherhood. "The fatherhood of St. Joseph, as with all human fathers, is a reflection in a creature of the fatherhood of God the Father," emphasized Monsignor Joseph Cirrincione in his booklet St. Joseph, Fatima and Fatherhood. "The vision of St. Joseph and the Infant Jesus blessing the world, with Mary by the side of the sun, which has not left its place, is God's assurance that although man may reject Him, God will never reject man."

When the peaceful scene is disrupted by the sun's gyrations during the Miracle of the Sun, Monsignor Cirrincione sees "an ominous foreshadowing of the consequences for the world, which are sure to be felt if the true fatherhood of God and the traditional strong role of the father of the family are rejected by mankind."

He adds, "The Miracle of the Sun represents not so much a threat of evils to come as it does a foreshadowing of the dethronement of God the Father and an intimation of the appalling consequences to follow."