In the wake of several recently-published investigative reports by ChurchMilitant.com, the Society of Saint Pius X is establishing a review board to investigate any and all allegations of sexual abuse within the organization.

The American District of the United States Society of Saint Pius X extends its policy: Plan to Protect to all people who are victims of abuse or those wishing to submit their complaints concerning the comportment of one of its members or employees.

According to the dispositions of the protocols in force in the Society, the District Superior will institute an Independent Review Board on a permanent basis. This organization has the responsibility to advise him specifically at the preliminary level in the assessment of allegations, assistance to the alleged victim, assistance to the alleged abuser, civil and canonical procedures, administration of immediate pastoral measures, etc. At a minimum, the Independent Review Board will include a married couple, a civil lawyer, a doctor, and a canonist priest. We reserve the right to include others on a temporary or permanent basis.

As much as the SSPX wants to prevent abuse from happening in the future, it cannot neglect extending its assistance to those who are already victims. The Society has been learning about the extent of this evil for years and has been in contact with the survivors of abuse. The Societys priests have listened to their grief and have a grasp of their suffering. It takes great courage for a person who has experienced abuse to develop trust again. Time and patience are needed before a survivor can open up, and the SSPX is committed to helping.

If you have been abused and you are still alone with your pain, the Society implores you to reach out, especially if you have suffered from a priest, religious, employee, or volunteer of the SSPX. You are encouraged to come forward and to do so with whatever spiritual, medical, or professional assistance you need. In cooperation, the SSPX wants to rectify these events, ensure that justice is exacted, and help you to overcome this evil. Please visit the SSPXs Plan to Protect website.

Among the examples of reported abuse involving the SSPX:

Among those victims was Vincent Lambert, the famous quadriplegic who became a central figure in the end-of-life debate in France, his Catholic family fighting a protracted court battle to keep their disabled son alive against the orders of the hospital, which wanted to remove his feeding tube. (Source)

As for the (admittedly confusing) status of the SSPX in regard to the Church, Father John Zuhlsdorf recently wrote a very good explanation on his blog. Click here to read it. 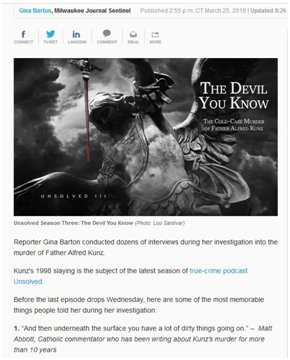 On a related note

Many of my readers know that, for a number of years, Ive been following and writing about the 1998 unsolved murder of Father Alfred Kunz of Dane, Wis.

In 2019, Gina Barton, investigative reporter for the Milwaukee Journal Sentinel, put together a series of podcasts and articles on the Kunz case (for which I, among others, was interviewed). Barton devoted a portion of her audio podcast, along with some lines of text in accompanying articles, to the SSPX and the loose connection it had with Kunz.

Bishop Richard Williamson, expelled from the SSPX in 2012, was the primary focus of the SSPX portion of the podcasts. Although interviewed by the Dane County Sheriffs Office years ago, Williamson was never considered a suspect in the murder, to my knowledge.

Not long before Kunz was murdered, a Minnesota woman went to her bishop, Richard Williamson [formerly] of the Society of St. Pius X, in desperation. Satan, she was convinced, had taken control of her son. Williamson, whose group had distanced itself from mainstream Catholicism, told the woman she should go to see Kunz, who could exorcise the demon.

During their efforts to speak with every member of the St. Michael congregation, detectives found just one parishioner who mentioned the pending exorcism. The man said he and Kunz had met for lunch a few days before the murder. During the meal, Kunz mentioned that hed been waiting for the woman from Minnesota and her son to arrive.

So far, Kunz told him, they hadnt shown up. Had they made their way to Dane in the time between that lunch and Kunzs murder? Police didnt think so. (Source)

Bishop Richard Williamson  who was affiliated with the Society of St. Pius X, a splinter group of priests who, like Kunz, rejected the reforms of Vatican II  told police he wouldnt be surprised if someone inside the church had put a price on Kunzs head.

Detective Wayne Honer questioned the bishop early in the investigation, while the manner of death was still being kept confidential among investigators.

Then he made a slashing motion across his own throat. (Source)