CNN commentator Don Lemon recently caused a stir by asserting that Jesus Christ admittedly was not perfect when he was here on the Earth.

Lemons assertion is wrong, of course.

Below is an excerpt from Captivated by the Master: A Theological Consideration of Jesus Christ, by Father Brian Thomas Becket Mullady, O.P., S.T.D. The newly-released book gives a scholarly response to the modernists version of Our Lord. Thanks to Sophia Institute Press for allowing me to publish this excerpt in my column. Click here to order a copy of Captivated by the Master directly from the publisher. 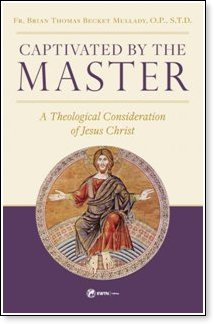 Weve talked a lot about Christs perfection; now lets consider His apparent weaknesses. Taking on human nature meant that Christ took on real limitations. Understanding the precise nature of those limitations is essential to understanding Christs saving mission. St. Thomas Aquinas used the term defects for these limitations, but this shouldnt be taken to mean genuine faults, but rather aspects of Christ that seem to run counter to His divinity, such as His ability to suffer and to die.

There are some Scripture verses that have tripped people up in this regard. In the Letter to the Hebrews, for instance, we read: For because he himself has suffered and been tempted, he is able to help those who are tempted (Heb. 2:18). In Romans, St. Paul writes that God sent his own Son in the likeness of sinful flesh and for sin (Rom. 8:3).

Some have read these as affirmations that Christ experienced internal temptation, that He at least fantasized about sin. But, as we have emphasized time and again, everything Christ assumed in the Incarnation was assumed for love of us and for our redemptionthe perfection of wisdom and power and grace, all of which are the goals of human nature. But temptation is not one of those goals; its not, as we will discuss, more human to be tempted to sin. Christ assumed the conditions of human nature that were necessary to free us from sin.

Weve already analyzed the original sin from several points of view, but here let us say that, as with all evil, it involves a lack in being and a lack in acting. In physical evilthat is, defects of our physical naturethe lack in being causes a lack in acting: my lame leg makes me unable to walk perfectly. But when it comes to moral evil, a lack in acting causes a lack in being. My will, through my own fault, loves a temporal good in a disordered way, and this causes me to perform an act to attain this temporal good, be it wealth or pleasure or power, that brings disorder to my soul and the loss of sanctifying grace. In failing to act for the highest good, my soul has truly become less than it was. In this state, I cannot go to heaven.

The evil of acting, or evil of fault, causes the evil of beingpunishmentwhich occurs in response to the disordered act. In Jesus, though, there can be no evil of fault. Yet He had to embrace some punishmentsome evil of beingto atone for our sins. He could not embrace ignorance, malice, or concupiscence because these would compromise His perfect loving obedience.

Some think this makes Him less approachable as a human being, but this gets it all wrong: Sin and moral weakness dont make someone more human, but less human. If we find Him more relatable as a sinner, that is an example of our fallen nature, and should not be celebrated.

Thus we can say that Christ has no defect of body or soul. His soul is full of grace and truth. His body is perfectly formed by the Holy Spirit. Whatever He did or suffered with that body and soul was for our perfection. So He hid His divinity to make His humanity clearer, and He suffered death because of the necessity of nature and not because He had to for any moral reason. He had no sin, either actual or original, and also no weakness of the passions (concupiscence); His obedience even in the face of death was always voluntary.

But Christs control of His passions didnt mean He was insensitive or unfeeling, in body or spirit. Quite the opposite: The Lord, fashioned by the power of the Holy Spirit, was the most sensitive human being Who ever lived. He felt more acutely than any of us doincluding the feeling of pain because His body was most perfectly human. When He was cut, He suffered greater pain than we do. But He also felt purer pleasure: He naturally desired and enjoyed all those things that are reasonable to enjoy. He savored food and drink and sleepbut He did so in a different way than we do.

Every passion, every feeling, and every emotion in Christ was subservient to reason. His anger, for instance, was never out of control, but always perfectly calibrated to the offense. In our fallen nature, anger can build and burst in us before we can apply reason to it, but for Christ this could not happen. Some say that Jesus lost his temper in the Temple when He chased out the money changers, but great anger does not have to mean a loss of control. Christs anger was always tailored to the situation. When He wept, it was from fitting sorrow. When He rejoiced, it was over something truly good.

While Christ never experienced interior temptation to sin, He certainly understood the difference between a sin and a virtuous act. So we must affirm that He chose goodness and obedience. Thus when St. Paul says that Jesus was sent for sin, (Rom. 8:3, above) it doesnt mean that He was sent in order to sin but because of our sin.

Christ was a victim of sin, the most sensitive of human beings, Who showed us what our disobedience, our rejection of Gods grace, does to the human personeven the best possible human person. We can see, then, the relationship between the tree in the Garden of Eden and the tree of the Cross on Calvary: the pleasurable catalyst of the first sin, and the painful instrument of its atonement.

Despite His extraordinary sensitivity, Christ could never seek any illicit or selfish goal in His pain or pleasure. He enjoyed and suffered always with our good in mind. When He fasted in the desert for forty days and nights, He genuinely got hungry, yet He did not endure this for His own perfection or satisfaction but as an example to us. When Jesus rejected Satans temptation, it wasnt because He wasnt hungry, but because He had the perfect integrity of the willthe perfected human willto be able to choose to obey the law of God even in the face of His great hunger.

Whatever defects Christ assumed, He did so not because He needed to be redeemed or because He was obligated, but because He loved us. Everything about Himincluding His defectsis ordered to our redemption.