January 17, 2013
Some years ago I was interviewed by a TV station about the issue of abortion. I had been matched up with a representative of Planned Parenthood, and after the interview, I happened to ride down the elevator with the woman who was my opponent. 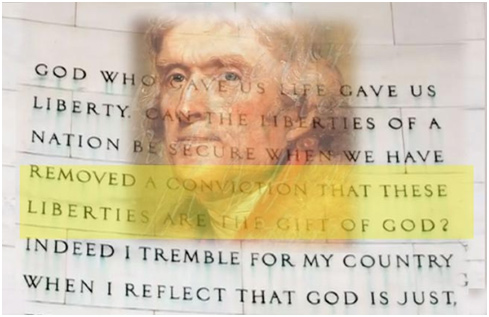 Caption: Jefferson warns us not to forget that our liberties are a gift from God (Image courtesy of Sons of Liberty Radio).

Well, she got me there, and I had to do some catch-up reading. It's true that Christianity is not in the Constitution, unless, of course you include the date at the very end, which says, "in the Year of our Lord...." It's true that Article VI states that "no religious Test shall ever be required" as a qualification to any office or public trust.

They Brought the Persecution With Them

But there's more to it. As every schoolboy knows, one of the main reasons why the Pilgrims (and many other immigrants in later years) came to the New World was to escape religious persecution. But the early settlers brought with them the same persecution from their homeland. For example, the Puritan fathers of Massachusetts Bay Colony ran a theocracy and did not tolerate those of other religions. And in various places, Baptists, Catholics and Congregationalists were either prohibited from holding public office, driven from the area, or just plain executed.

We've got to fix this, thought the Founders of our country. Madison and Jefferson were among those who shaped the idea that the government should not officially support any "sect" of Christianity. This thinking went into the writing of the Constitution, and thus Christianity was not promoted in that document. But the Founders certainly did not have in mind some kind of atheist utopia, where our civic leaders abandon all moral direction or support of Christianity.

A closer look at our governing ethos certainly shows Christianity as an essential part. The Declaration of Independence, for example, has several references to God. The document appeals to the "Laws of Nature and of Nature's God," and that all men are "endowed by their Creator" with unalienable rights (attention, Mr. Obama: this phrase is really here). At the end, it asks for "a firm reliance on the protection of divine Providence...."

The Smithsonian Institute, in a recent article, describes America as a "secular republic." This phrase, however, doesn't do justice to our form of government, any more than a list of ingredients in a cookbook make up a chocolate cake. In baking a cake, there is also action and good will, with the purpose of making something that is both good and pleasing. There is a person behind the baking of a cake. And there are people, and a purpose behind the acting out of our government.

Yank Christianity Out of Government

You can't yank Christianity out of our government any more than you can yank the soul out of a man, and still call him a man. Has our government recognized Christianity? You bet. Just look at the credit in granite given to Christianity and the moral laws in our monuments and public buildings in Washington, D.C. Take a look at the newly-released Sons of Liberty Radio YouTube video that shows impressive footage of Bible quotes and presidential mentions of God and Christianity in our nation's capital. (Disclosure: Sons of Liberty Radio partners with our firm, TreeFrogClick). Bet you didn't know that there were tiny Bible verses engraved into the walls of the Washington monument. Or that carved into the cornerstone of the wings of the Capitol building is the speech of Daniel Webster, which culminates in the words,

"And all here assembled ... with hearts devotedly thankful to Almighty God for the preservation of the liberty and happiness of this country, unite in sincere and fervent prayers that this deposit, and the walls and arches, the domes and the towers, the columns and the entablatures now to be erected over it may endure forever."

So where is the true America? Its guiding principles are in its soul – in Christianity.