Kevin J. Banet
The inauguration and the Silly Putty President
A humorous look at what's really going on behind all the ceremony 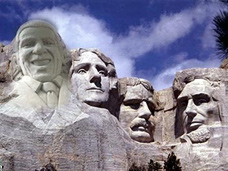 Caption: The image of Obama is taken from a sand sculpture made for the Democratic National Convention this past fall.

The inauguration is over. But our reporter Eliza Snoop was able to catch an interesting private conversation between the President Obama and Joe Biden, since she was able to disguise herself as a fly and enter the presidential limo.

"A stirring speech, Mr. Presisent," Biden said. "I'm glad you were able to include the words 'endowed by their Creator' in your quote of the Declaration of Independence – this time."

"Yep – that ought to keep the Tea Partiers quite for a while."

"I'm also glad we were able to get some good entertainment into this – many people think the whole day is just boring. Beyonce was great."

"It's Be-yon-SAY" to you old folks, Joe," the president quipped.

"Oops. But I can pronounce James Taylor."

"Say, I thought James Taylor was going to sing something unique. I mean, 'America the beautiful was nice, but – "

"He had something prepared to the tune of his famous 'Fire and Rain,' but he was going to call it 'Fire and Brimstone.'"

"Glad you put a damper on that, Joe. We don't want any divine condemnation."

"Hey, I liked that line about how we expose the error that, 'All problems can be solved by government alone,'" Biden chuckled. "Just get them to believe that we think like they do, and then we can do what we want."

Obama smiled approvingly as the car turned onto Constitution Avenue.

"Of course, we'll put a lot of church activity and charity groups out of business, as we planned – I really like your HHS mandate where we're going to shut down Catholic institutions. You're a genius, Mr. President."

"It's all going to fall into our hands someday, Joe," Obama quipped. "Hey, what about that Rushmore project?

"Yes, Mr. President. There's just no more room for any other face. We'll have to replace one of the guys up there with your awesome visage."

"Who will we replace? Lincoln, he's a good guy. Jefferson, nah. Hey, how about Washington? I like how he's out front of all the others, and I never liked all those paintings of him praying."

"Perfect. And I've already looked into the logistics. Seems the granite experts have had difficulty finding a grey material that will stick to the rock. In fact, there's only one substance that will do it.

"With all due respect, Mr. President, it's Silly Putty. It will take 95,000 tons of the gummy stuff to get in your ears."

"Do it, Joe. It's just like our public policy. Ridiculous solutions, but just make it stick with the public."