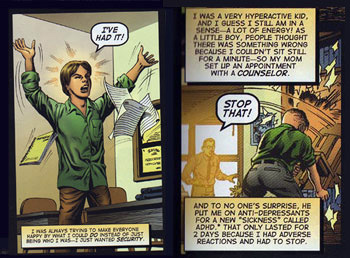 Musician and columnist Bradlee Dean, who was prescribed an antidepressant as a child, says we've been ignoring the rod of correction. His biography is shown in comic-book form above.

When I was a young man and ignorant of many things, a friend of mine was taken by her mother to the psychiatric ward of a hospital. My friend had spent an unsettling night ripping up paper into small pieces and crying. It was a sad event, but this is what her mother had to do when her daughter went off her medication. I had never heard the phrase "going off your medication" or "chemical imbalance."

I thought, why couldn't such a person just grit his teeth and be normal? Just snap out of it! But I could not discern the labyrinthine paths of the human mind under duress – nor can I today.

Katherine Sharp, writing recently for the Wall Street Journal, was given an antidepressant while in college to relieve anxiety. She writes about the effects of her treatment. "I wanted my feelings to mean something. The idea that my deepest emotions were actually random emanations from my malfunctioning brain didn't uplift me; it just further demoralized me."

Antidepressants for children is dangerous, Sharp says, because their personalities are developing, and they don't get a sense of their true emotions, being masked by the drugs. Such drugs can blur the line between "actual" and medicated feelings.

Kids therefore never develop a healthy sense of self-identity. Sharp writes of a 28-year-old woman who began taking Prozac at age 14, and yet who wonders, "If I'd never gotten antidepressants, who would I be? What would I be like?" Sharp concludes that the expanding use of psychiatric medication over the last twenty years has led to prescriptions for patients with "less and less severe cases."

Since 1988 Americans have increased their use of antidepressants by 400%, and 5% of children 12 to 19 take these medications. Glasgow general practitioner Dr. Des Spence says that anti-depressants are hugely overpresrcibed and have become the "golden goose" of drug companies who have formed close ties with doctors to produce a "drug mindset" of how to treat mental illness.

It seems to me that in some cases, such medications are properly used to correct a chemical imbalance (whatever that is). However, there is a trend of over-prescribing medication while ignoring behavioral causes. Many kinds of misbehavior, such as drug and alcohol abuse, sexual licentiousness, abortion, homosexual behavior, and let's just say it – all-around godlessness – lead to emptiness and despair. That's not to say that only sinful people suffer from depression. Due to man's fallen state, suffering is a part of the human condition.

Cleaning up the immorality can often be a first step towards peace of mind. Counseling, prayer, and even spiritual direction can be used to complement antidepressant treatments and prescriptions. Even if the person is suffering from the faults of others, an approach that recognizes plain old immorality is a step in the right direction.

Preacher and columnist Bradlee Dean has drawn attention to mass shooters such as Sandy Hook's Adam Peter Lanza, the Aurora "Batman shooter" James Holmes, and Eric Harris, of the Columbine High School massacre: They were all users of anti-depressants at the time of their crimes. (Disclosure: Bradlee Dean's You Can Run International is a client of our PR firm.) In Dean's article, "School Shooters and Pharmaceuticals," he points out that the controversial TeenScreen survey, administered to children as young as nine years old, finds that nearly twenty percent of students surveyed are labeled mentally ill, which of course leads to a prescription.

Dean's article leads off with the provocative quote, "ADHD is fraud intended to justify starting children on a life of drug addiction," made by Dr. Edward C. Hamlyn, founding member of the Royal College of General Practitioners. Dean, a drummer in a heavy-metal rock band and a preacher, himself was diagnosed as having ADHD as a child, only to be taken off of it because of adverse reactions. Dean also notes that in past generations, the "rod of correction" was sufficient to avert many kids' behavior problems.

While behavior that is objectively immoral is not the only cause of mental illness, I think that school counselors, therapists, and even pastors would get more success if they pointed out to their clients that many times this problem is due to personal sin, either on the part of the client or others around him. Thus, a lot of emotional pain could be avoided, averted, or at least properly understood.

However, public schools, since they are controlled by the government and not by parents, won't mention morality or sin. This generally isn't the approach of mental health professionals, either. In California, residents are hampered even further, since it is now illegal for a therapist to help a homosexual go straight. You call this freedom?

Our world is broken, and suffering is part of it. Those with the burden of depression deserve the necessary treatment that alleviates the problem, not merely the symptoms. As the Body of Christ on earth, Christians are united to each other in compassion for all people, and share in the struggle for the spiritual – and physical – well-being of humanity.