You've been passed up.

Not to detract from your gallant witness for Christ on the professional gridiron – but a rising star has moved above you, from the looks of a recent news report. 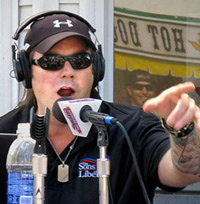 Bradlee Dean is the long-haired drummer for the hard-rock metal band Junkyard Prophet, who visits high schools, college campuses and county fairs to challenge young people to think about their heritage as a nation founded on Biblical principles, and a Constitution that soldiers have died to defend.

Dean was mentioned at the top of a list of Christian youth icons in an article in the left-leaning Salon Nov. 4, "5 Christian 'hipsters' trying to make fundamentalism look cool." Tebow, who drew the admiration of millions for his public stand for the faith, including his promotion of sexual self-control, was third.

"Tim is a great witness for Christ," Dean said. "I'm humbled to be put in the company of such good examples for young people."

Dean added that in the article, Salon "tried to slam Biblical Christianity, but all they did was give a back-handed compliment to those of us who are really reaching youth who are thirsting for a knowledge of the true America and its Christian foundation."

Salon quipped that Dean is "rabidly homophobic," and "has endorsed executing people for being gay." Dean disputes the claim, however. "This website, which masquerades as journalism, is perpetuating the lies first spouted by MSNBC's Rachel Maddow, whom we are suing for $50 million for defamation," the Christian rocker said.

Maddow, who is an open lesbian, claimed in a May 2011 broadcast that Dean was calling for the execution of homosexuals on his program, The Sons of Liberty Radio. In fact, Dean talked about about Muslims' disapproval of homosexuality. Dean in fact opposes exercising any violence against homosexuals.

Dean's ministry and nationally-syndicated radio program can be followed at Sons of Liberty Radio. Why not like Bradlee Dean on his Facebook page?