Kevin J. Banet
What Elvis blurted out tells us about America today 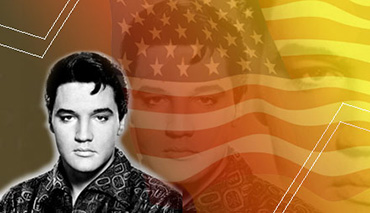 Even the name "rock star" is a compliment for friends we admire.

But the glamor and fame of a star like Elvis Presley wasn't enough to give him peace in his heart. When asked in an interview why he always seemed so happy and joyous, he blurted out, "Because I have to in order to make a living. Inside I'm as lonely as hell."

Our extreme admiration for celebrities has turned our hearts away from God, and toward false idols fashioned by our secular culture. Psalm 135:16 says, "They have mouths, but do not speak; they have eyes, but do not see...." Thousands of years ago, these words were written by King David about the idols of the heathens. Such idols, then and now, are made of silver and gold, but are only "the work of men's hands."

The Hope of Christ

If you look around and see darkness, please do not despair, for you must always remember that God's people shine best in the dark. Darkness is no match for the light of God's truth.

One danger today is that when people ignore or forget about God they become victim to political movements and corrupt leaders who grab the emptiness in men's souls and replace it with promises of earthly happiness. And all the while they steal our rights – the rights that our wise forefathers built into the Constitution and into our traditions over the years.

Sharing Christ with the Stars

Some people are reaching out to the rock stars with the liberating message of Christ. One is Bradlee Dean, himself a drummer in a band, and head of The Sons of Liberty youth ministry. He recently visited the National Association of Music Merchants' show in Anaheim, CA – a show frequented by rockers such as Carmine Appice (Ozzy Osbourne), Vinny Appice (for Ronnie James "Dio"), Steve Smith (Journey), and many more. Breaking the ice with a simple optical illusion game, Bradlee walked throughout the convention, sharing the Gospel with these stars!

Bradlee, who was once an up-and-coming drummer in a heavy metal band, left the secular side of the music world years ago when he converted to Christ and then dedicated his life to reaching youth with the message of the Biblical and Constitutional foundations of America.

Friends, are you tired of what the liberals and leftists are doing to America? You're not the kind of person who will stand idly by while our values of freedom, morality, and our Christian heritage are being trashed, do you?

It's time to take a stand. Keep up with Bradlee's ministry, which includes a nationally-syndicated radio show, regular columns in such publications as WND, and talks to youth and other groups around the country. Become part of a growing movement to renew America. Sign up for the Sons of Liberty Newsletter and get a free patriotic screen saver today.