Kevin J. Banet
What if Thomas Edison had to endure Common Core?

April 28, 2014
When Thomas Edison was a boy, his teacher complained that he was "mind addled." That event marked the end of Edison's three months of formal education.

From that point on, Edison's mother became his teacher, and years later, the world's most famous inventor remarked, "My mother was the making of me." 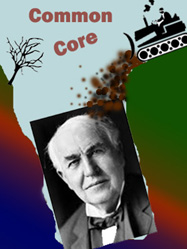 Good thing Common Core wasn't around then. In fact, with this federal takeover of local education, the man who gave us the light bulb, phonograph, movie camera, and a thousand other patented products, might never have set the world on fire with his unbridled imagination and hard work.

Can you fathom what a conversation would be like today between Edison's mother and a local school official?

"I don't think my son will do well in your school," says Mrs. Edison.

"But you can't take him out of school," says the principal. "His mind wanders. ADHD is a serious disorder. Medication is the best thing."

"I'll have nothing to do with your nonsense," Mrs. Edison replies. "My boy has lots of potential. I just know it."

"But you're only his mother. We are experts in child psychology. We have it all figured out. Your boy needs a steady curriculum, for slower and troubled students, developed by experts far away in Washington, DC, and who knows where."

"But I know what's best for my boy. I know what motivates him, what keeps his mind buzzing with ideas. What in tarnation is in your courses, anyway?"

"Well, for one, we've dispensed with that old 1 + 1 = 2 stuff. Today's math is much more sophisticated. All those traditional subjects are going to be turned on their heads. And there's plenty of explicit sex education. We also teach evolution as if it's a plain fact. We're all just animals, aren't we?"

But today, Mrs. Edison might find legal challenges and roadblocks toward that goal. Thus, the man who sparked entire industries and changed the way we live, would be saddled in a slow-moving classroom, his great imagination quietly being put to death by Ridalin and regimentation.

This is not what made America great.

There's something about America's stubborn sense of independence and strong families that forms the bedrock of greatness in this country. The rest of the world does not produce the Thomas Edisons, Bill Gates, or Steve Jobs of the world.

Think of Mark Zuckerberg. As a young man, the Facebook founder developed a computerized intercom that announced patients at his father's dental practice. The device made it unnecessary to call out the names. Later, the family hired a local programmer to come to the family home to tutor the young prodigy.

The rest is history.

When education is closely connected to the home, great things happen.

We often forget that our children's education is primarily the responsibility of the parents. We allow tutors, teachers and helpers to assist us – not take over our job. These helpers should be under our direction. When it's all moved to the far-away utopia of Washington DC, true education has ceased.

A recently-published book pictures a more humanized educational structure in the year 2040. In America 3.0: Rebooting American Prosperity in the 21st Century, authors James Bennett and Michael Lotus envision a society in which children enjoy a diversity of educational choices with the use of online learning systems and internet-enabled teachers. This futuristic look is made possible by government reforms involving what's called follow-the-child funding.

A prophet speaks out

Folks, today's impersonal and overbearing educational system is only part of the dinosaur-land of huge government and central planning that squelches creativity and the rights of parents.

One prophet of our day is Bradlee Dean, a long-haired youth minister who for years has urged students to think along the lines of freedom of thought, and of the Biblical and Constitutional foundations of our great country.

Dean has warned parents of the dangers of public (er, government) education, advising homeschooling as a healthy alternative. Recently, he was granted the Education Liberty Award by the group About Common Core, for his willingness to confront the doctrines of this pernicuous program via his radio show, speaking engagements and public school talks. Not everyone who speaks out against Common Core gets this award.

In fact, the popular website Freedom Outpost says, "For nearly two decades Dean has been going into the belly of the beast (the government schools) with the message of the gospel of Jesus Christ, the history of America's Christian heritage and the exaltation of God's law."

A Cure for the Common Core

Here's what others have said about education – and what the common man already knows deep within his heart:

"It needs more than ever to be stressed that the best and truest educators are parents under God. The greatest school is the family." – R.J. Rushdoony, one of the inspirations for the modern Christian homeschool movement.

"Every home is a university and the parents are the teachers." ¯ Mahatma Gandhi

"As regards moral courage, then, it is not so much that the public schools support it feebly, as that they suppress it firmly."

"Parents have the first responsibility for the education of their children. They bear witness to this responsibility first by creating a home where tenderness, forgiveness, respect, fidelity, and disinterested service are the rule." – Catechism of the Catholic Church, No. 2223