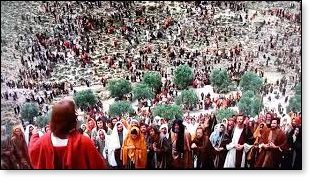 The gods neither know nor understand,
wandering about in darkness,
and all the world's foundations shake.

There is much to consider for the 3rd Sunday of Lent and the events of the Book of Exodus since the Second Sunday of Lent. Last Sunday we witnessed the arrogance of Pharaoh how he relented on his promise to Moses to "let my people go." He pursued them in the desert from revenge for the troubles he actually brought upon himself and his people, the death of his heir and every first born of Egypt.

His "stubbornness" cost him his entire army which drowned in the Red Sea (actually the Sea of Reeds). Two and a half months later we learn of the "stubborness" of the Israelites incessantly "grumbling" before God who gives them manna (bread) from heaven in the form of a morning frost and quail in the evening which they would feed on for forty years. Later in their stubbornness "they quarreled with Moses" and "said, give us water to drink" and, again, God provided them water from the rock of Horeb thereafter known as Massah and Meribah because the Israelites quarreled and tested the Lord there, saying, "Is the Lord in our midst or not?'

Continuing their journey "the Israelites came to the desert of Sinai" where God gave Moses the Ten Commandments. God knew that they were a people motivated by fear and "on the morning of the third day there were peals of thunder and lightning, and a heavy cloud over the mountain, and a very loud trumpet blast, so that all the people in the camp trembled. But Moses led the people out of the camp to meet God, and they stationed themselves at the foot of the mountain. Mount Sinai was all wrapped in smoke, the Lord came down upon it in fire. The smoke rose from it as though from a furnace, and the whole mountain trembled violently. The trumpet blast grew louder and louder, while Moses was speaking and God answering him with thunder. Then we read the people Israel said to Moses, "You speak to us, and we will listen; but let not God speak to us. Then God summoned Moses to the top of the mountain to give him his commandments for the people. Moses remained with God for forty days and nights and God explained the precepts of his commandments, how the Israelites should conduct themselves with God and all other persons.

We sadly "know the rest of the story" not only of the people led out of slavery to the freedom which Zechariah announced centuries later before the birth of Christ who would be for us the incarnation of God's commandments for us to follow, saying, "he has raised up for us a mighty savior, born of the house of his servant David" who "through his holy prophets he promised of old that he would save us from our enemies . . . free to worship him without fear, holy and righteous in his sight all the days of our life, (Canticle of Zechariah,

Yet, the people of God wandering in a desert and the people of God sojourning in the wilderness of our world – despite God's extraordinary interventions in times past and times present – we so often remain "stubborn of heart," no better than a Pharaoh or an Israelite who refused to enter the promised land. We are all to one degree or another stubborn. And why? We first need to realize that virtue and vice share one thing in common, both are habits, learned and practiced manners of thinking, acting and living. A heart is stubborn only through pride or fear, pride that we are superior to God and our brothers and fear that we may lose who we are by changing our ways. But that is not what Jesus taught, "If you would be my disciple, (pause) deny yourself, (pause) take up your cross and follow me," (Luke 9:23). We need to frequently remind ourselves we are creatures. We did not self-conceive ourselves and our first debt in justice is due God, our Creator and our Father. Compare God's Sermon on Mount Sinai with Christ's Sermon on the Mount of the Beatitudes ( so named in Israel). In both, God the Father and God the Son had to explain in detail our denial of the commandments of God which were imbued in our original nature before the Fall and which were then self- evident and are self-evident for us when we deny others instead of favoring our disordered nature. The commandments of God are imbedded in our human nature as "love your neighbor as yourself" because we are members of the same body of Christ "made man." All our 'bad habits' and sins are centered on the denial of others including God which Psalm 82 elaborates and which you will find in these pages from last February 17th, my Reflection on Psalm 82.* Here are the last stanzas of the Psalm which would describe the people of Israel wandering in the darkness of their minds:

The gods neither know nor understand,
wandering about in darkness,
and all the world's foundations shake.
I declare: "Gods though you be,
offspring of the Most High all of you,
Yet like any mortal you shall die;
like any prince you shall fall."
Arise, O God, judge the earth,
for yours are all the nations.

I am the founder and director of the Families For Families Retreat House, a refuge for anyone who wants to rethink his or her life in a quiet non-demanding environment in an historic house c.1709 when life was less complicated. I am also and primarily a Catholic priest having been a college and university teacher, business-owner and executive among other things. I received my Bachelor's and Master's degrees in English literature from Saint John's University, Jamaica, New York and completed post-graduate studies at Kansas State University. Contact me at FatherTomSays@gmail.com.

March 22, 2018
Palm Sunday and the commemoration of the Lord's entrance into Jerusalem

January 16, 2018
The Epiphany of the Lord comes to all Christians

January 8, 2018
The Epiphany of the Lord comes to all Christians