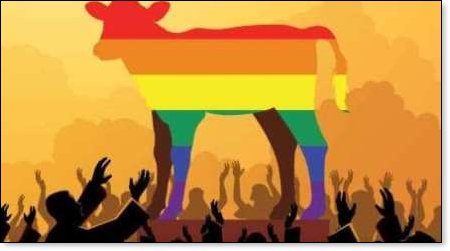 The more the gay life becomes part of the social scene, the more the movement becomes militant. The response from some of the Christians has become anodyne and oblique. In some cases, the very warning of scripture is omitted or denied, and compromise has become an art among apostate theologians.

Yet, only three percent, or less, of people identify as being homosexual. Why do the gays barrage the rest of us with hateful polemics and labels, like homophobe?

For many years, Christian speakers and journalists were content to say that we love the sinner, but we hate the sin. This seemed to appease the gays for a time, but that day has passed since the gay mafia began to emerge.

Without being raw of baleful, it seems now some Christians are taking off the gloves and are using a more direct approach—by using words that are both scriptural and socially honest.

The Bible is not so squeamish about the gay lifestyle. The following words are either explicit or implied throughout the pages of writ to describe homosexuality.

It takes a great deal of color, pride, marching, and waving of the gay flag to deal with the words listed here, but often that is not enough.

The militant gays have strong invectives to embarrass the naysayers and cause them to tiptoe away in fear.

If all else fails, the latest tactic is to declare that they have been deeply wounded.

It is a typical leftist tool, a page out of Emperor Nero’s playbook to shift guilt from the gays to the Christians. The wounded always get our attention, even if they are completely guilty of the most heinous acts.

But children are wounded when you won’t buy them an ice cream. Criminals are wounded when they get shot robbing a bank. It is a silly response to the worst behavior and deserves not to be dignified.

But beyond that, we are offering them a blessing if they would choose the object and the target of their offense differently. Look for yourself.

Being offended is the perfect sign of rejection. Being wounded is a kind of narcissistic frosting on the cake.

Describing the hypocrisy of the Scribes and Pharisees of his day, Christ warned them that because they stole from widows and faked out the people every day, they would receive the “greater damnation”—where will the people calling for gender changes stand at the last day?

Individuals, public schools, and corporations have gone to great lengths to imagine ways to support, lure, and groom youngsters to the gay and trans world. Mattel has a Barbie trans doll, Pizza Hut is supporting trans material, Disney has gone full fruit, like Carmen Miranda on steroids. But are their imaginations honed enough to explain exactly what this means?

“Woe unto you, scribes and Pharisees, hypocrites! for ye devour widows' houses, and for a pretence make long prayer: therefore ye shall receive the greater damnation” (Mt 23:14).

The trans movement has its own list of negatives.

It includes a “20-fold increase in suicide attempts by those who complete such a transition, compared to those who don't.” Add to that medical problems with puberty blockers and other trans meds and deep social and mental problems.

The race toward all perversions and the latest versions of inclusivity have created a long list of negatives, some are ancient history, some are subjective, and some are in the news today. Let’s see.

Cancellation of lives and careers for all suspected transphobes and homophobes

Rejected in scripture and labeled—an abomination

Contrary and insulting to nature

Attack on the traditions, folkways, and mores of all civilizations

Destroys the harmony between God and man

Calls God a liar and proposes war against Him

Slaughtering of the English language and the abuse of pronouns

The mauling of bodies in transgender surgeries and puberty blockers.

Some Americans are waking up just a bit, and now have decided that leading young children to change their sexual identity should be classified as a crime.

In Dallas, Texas, a nightclub called “Mr. Misster” held an event they named “Drag the kids to pride.” They gave the children dollar bills to give to the trans dancers as they were cheered on. On the back wall of the club a sign saying, “It’s not going to lick itself,” was emblazoned in neon pink.

Far beyond a simple “thou shalt not” comes Jesus’ warning for those who willfully plan and execute any malicious, harmful, or deadly acts against innocent children.

“But whoso shall offend one of these little ones which believe in me, it were better for him that a millstone were hanged about his neck, and that he were drowned in the depth of the sea” (Mt 18:6).

In Israel, the “Channel 14 Now” magazine featured a cover of the rainbow calf. It appears as the replacement of the ancient golden calf worshipped by Israel is now complete. They thought Moses was not going to come back from his visit with God to get the Ten Commandments. They engaged Moses' brother to make a golden calf to worship.

It appeared with the headline, “LGBTstan: How radical left-wing organizations impose the LGBT religion in Israel.” Author Gali Ben Horin said it was not at all homophobic, but was meant to show how radical left political movements in Israel were using the gay agenda for political purposes.

Ironically, religious LGBTQ so-called advocacy group Havruta decided that both the author and the article were derived from America’s deep-south people of faith.

In fact, most all anti-gay activity is derived from the law Moses brought back from the mountain and subsequent provisions of that law given to him by God.

Extreme irony is the idea the people who gave us the law that condemns homosexuality (the Jews) should have the one city (Tel Aviv) in all the world that rivals San Francisco for gay activity.

At last, a possible answer to why bad things happen to good people

Every time a tornado, flood, fire, shooting, or other calamity strikes a community we mourn and question how such things could happen to good people.

We could start by reminding ourselves that Christ once rebuked a man for calling Jesus “good” with this reply.

After that rebuke, we could ask the question of just how many “good” people are there in any given area in our communities?

USA Today recently said that Gallup's annual Mood of the Nation poll found that the acceptance of gay people went as high as 62% and in other polls around the nation it went as high as 71%.

The Bible does, in no uncertain terms, declare the practice of or the advocacy for the homo lifestyle as egregious to God, and it is an unrighteous behavior.

Transgenderism – America’s Demonically Inspired Path to Its Own Destruction

Why Are People So Surprised That Little Children Were Entertained by Drag Queens in a Gay Bar?