Michael Bresciani
Hiding behind a façade of ‘save the planet’ green, Biden’s ‘liberal world order’ ushers in a blood-red culture of death 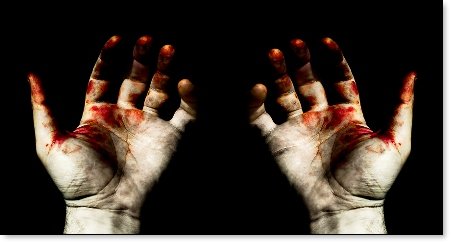 “I call heaven and earth to record this day against you, that I have set before you life and death, blessing and cursing: therefore, choose life, that both thou and thy seed may live.” (Dt 30:19)

The news accounts with pictures of hundreds of first responders gathered at our Southern border to attend to a tandem trailer loaded with over 50 dead immigrants is grueling and deeply disgusting.

Those would-be Americans all put up ten thousand dollars each, only to die a torturous death in the grueling heat near the Mexican border, with no chance of escape. It is pure evil, and our illegitimate president is culpable, even though at the time, he was galivanting around Europe trying to save the planet along with the other green fanatics of the world.

Biden could not help from stumbling and mumbling through his first and only term, but to be sure, he is red not green.

He will soon begin fighting alongside pro-abortionists to find a way to circumvent the end of Roe and keep the river of blood flowing.

With tricks like codifying Roe and ending the filibuster, he hopes to slap down the ruling to end Roe recently issued by the Supreme Court.

The over 60 million aborted humans since 1973 isn’t enough for him and the death mongering, insatiable, Democrats, and leftist.

Next, Biden has sworn to the transgender activists that he “has their back.” This bold assertion means that even more blood will flow from surgeons’ knives, working to alter the bodies of our unsuspecting young people, who may have had a momentary brush with gender dysphoria.

As the fight for more blood continues, the blood spilt on the streets of our major cities because of Biden’s soft on crime policies serves to take up the slack.

A Lifetime of Prophecy says Green Fanaticism is Dead Wrong

From Joe Biden’s cutoff of American oil and gas production to the British ‘tyre’ deflators in downtown Manhattan, the fanaticism of the left indicates a clear plunge into mental illness for the political green machine.

While they have managed to deflate the tires on some 40 SUVs in New York and are calling for even more in other cities around the U.S., it seems they need to let some of the air out of their heads to take the pressure off their beleaguered brains.

After more than a half century of observing Biblical eschatology (Doctrine of Christ’s return), there is little doubt to me and other students of prophecy that this world has no chance whatsoever of being lost to climate change.

There will be wars, economic shifts, and interventional judgments before Christ sets his feet again on the Mount of Olives in Jerusalem.

Hundreds of details would be wasted here, but it suffices to say that when Jesus descends, the nonsense is finished. The world will be battered by God’s judgments, but not beaten by the fears of the green alarmists. This is summarized in only one verse of the scriptures.

And the seventh angel sounded; and there were great voices in heaven, saying, The kingdoms of this world are become the kingdoms of our Lord, and of his Christ; and he shall reign for ever and ever. (Rev 11:15)

If green disasters wipe out the planet, exactly what would Christ be ruling forever?

Satan never arrives with battalions of demons to unload them all at once on the unsuspecting. His greatest tool is to introduce latitudes and ever shifting moral lines. Small increments over long periods of time insure no one is too alarmed, and eventually it all seems like old stuff.

We who know this and the scriptures do not ask why, after thousands of years with only some of the populace inclining to the homosexual lifestyle, now it has become a torrent, the bursting of the dam.

Homosexuality is the gate now swung wide open, and coming in behind it is pedophilia, transgenderism, unlimited gender choices, and a half dozen new crackpot sexual perversions about every six months.

With the main door open, the limitations are now removed. Now, between indoctrination, grooming, and homo-activism, the people are being inundated with perversions ala carte.

All that is left is for the reprobate politicians to give it full force under the law in what is known as “equality.”

Here is a surprise for those who have ears to hear – nothing about the new perversions is equal – it is damned.

The writer of Proverbs declares under the inspiration of God’s Holy Spirit, that there are six things that God hates and a seventh thing that is an abomination.

We need not go beyond the first three to see, that every perversion and every bit of today’s bloodlust is covered.

These six things doth the LORD hate: yea, seven are an abomination unto him: A proud look, a lying tongue, and hands that shed innocent blood, (Pr 6:16-17)

At last, there is no shame connected to the homo lifestyle. It has shifted all the way to the other end of the spectrum. It is a “pride” movement today. And yet pride is one of the deadliest sins of any day, and it is usually connected to that period just before someone’s complete demise. It took quite a strong delusion (2 Th 2:11-12) to pull this one off and a thousand sneaky little increments over the last few decades. Sorry, it is still as shameful as it ever was.

For a generation that leans so fully on scientific knowledge, it is incongruous that transgender activists refuse the empirically derived fact that no one can change their DNA. Drugs, blockers, hormones, operations, appearance, and counseling all completely fail. If you are born a man, you will die a man. Science will not lie for you.

It is also true that at the end of your life you will stand and give account for the altering of your body to the person who said: “But from the beginning of the creation God made them male and female.” (Mk10:6)

Just because we are momentarily getting away with all this bloodshed doesn’t mean God is off taking a nap.

One of the secrets about God’s laws of reciprocation is that He uses increments also. His judgments start small. Disaster, terrors, wars, etc. – a little at a time. But there is a full reckoning on the books. But the longer God tarries the more confident the offenders become.

Because sentence against an evil work is not executed speedily, therefore the heart of the sons of men is fully set in them to do evil. (Ec 8:11)

It matters little what you may call it, dispensational eschatology, or Biblical prophecies, the result cannot be altered. As sure as the day dawns, these matters are headed our way.

People liked to laugh at terms like the “New World Order,” and it was thought to be largely hyperbole or something akin to conspiracy theory.

It is directly connected to the rise of the antichrist, and that is closer than anyone can imagine.

Even the best eschatologists have had some trouble gearing up to the idea of what the old-time dispensationalist called the “Revived Roman Empire.”

This is the teaching that at the end times a new world power will emerge in the same general geographical area as the old Roman Empire. The Bible also says that, soon after this new power is formed, the antichrist will arise from within that powerful and very diverse empire.

Another prophetic promise that we love to ignore is the warning of coming famine, poverty and scarcity preceded by world wide economic crashes and the shifting of wealth in ways we can not anticipate.

For this writer, it was given as a special message to me some years ago. America will be shocked. It would seem that no land as rich as the U.S. could sink so low. Don’t laugh at this one because it, too, will not go away.