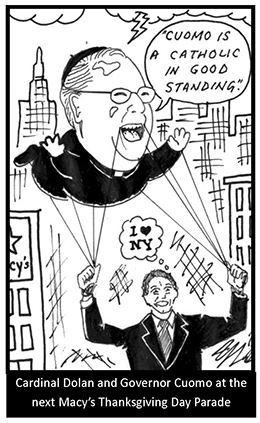 The cardinal is the Roman Catholic shepherd for the largest group of Roman Catholics in America. The governor is a member of the Roman Catholic Church who prides himself on his support for aborting children and leading the bandwagon for same-sex marriage. These are two positions that are in direct conflict with Catholic teaching.

That is the starting point for the cardinal flub.

Recently Cardinal Dolan criticized Governor Cuomo for his position on abortion: "I don't mind telling you that's one of the things the governor and I talk about," Cardinal Dolan stated during a radio interview with a columnist for the New York Post. He continued, "Look, he and I have very grave differences, and this is one of them."

Later, the cardinal corrected himself through spokesman Joseph Zwilling. According to the New York Times, who quoted Zwilling, "The cardinal, who is the archbishop of New York, 'would not, and did not, suggest the governor might not be a Catholic in good standing going forward.'"

This scenario is just one of numerous Cuomo/Dolan headlines. In fact, two years ago Bishop Howard Hubbard of Albany, New York, addressed the question of denying Holy Communion to Cuomo. The question of Cuomo, a divorced Catholic who lives with his girlfriend, yet who receives Holy Communion, was then addressed by a canon lawyer. Responding to that, Hubbard said he had no intention of denying Cuomo the sacrament, and Dolan concurred. The pattern is crystal clear.

Cardinal Dolan has gone out of his way to make it very clear that he has a pleasant relationship with Governor Cuomo, suggesting perhaps that they have simply agreed to disagree on certain matters such as child killing, homosexuality, and divorced Catholics living with their girlfriends.

Be that as it may, good buds should be comfortable expressing any concern – even if it means harming the friendship – by lovingly pointing out when one buddy goes down a path that is leading the wrong way. This should especially be the case when one of the pair is a Catholic cardinal.

Governor Cuomo is one of those public figures who fits perfectly with the Church law that states that he should be denied the Sacrament of Holy Eucharist, the body and blood of Christ, if he approaches a priest or Eucharistic minister at Mass with the intention of receiving the sacrament. That law, known as canon 915, states clearly that the sacrament should be denied to those "who obstinately persist in manifest grave sin."

Canon law expert Ed Peters agreed and has argued in his blog that Cuomo's "long pattern of conduct" establishes beyond doubt that he should be denied Communion not only for his own good, but to avoid further scandal.

At the same time that the most recent news about Dolan and Cuomo was percolating, Pope Francis told a congregation at his morning Mass: "The problem is not that we are sinners. . . . The problem is not repenting of sin, not being ashamed of what we have done."

But if the most respected Catholic priest a man knows – a cardinal of the Roman Catholic Church – not only fails to help the sinner see his error, but avoids talking about it, exactly how can the sinner become aware of how serious the sin could be if he does not repent?

Pope Francis told those attending his Mass that the encounter with Christ that someone has when he is truly sorry for his sins is a transforming experience as he realizes that, in repenting of this sin, he finds "the joy of forgiveness" in Christ.

It is from this perspective that we need to pray that Cardinal Dolan realizes the damage he is doing not only to Cuomo, but to those souls witnessing this blunder in his relationship with the governor.

Governor Cuomo could be experiencing the joy of a forgiving Christ if he were denied Holy Communion and understood the reasons why this action had to be taken. He could recognize in that moment what he is really missing in his life.

The cardinal could make this happen!

Let us pray that the cardinal flub becomes a cardinal moment of grace.

Please join American Life League in our Pray and Fast for Our Bishops campaign; light a candle for Cardinal Dolan today!