May 24, 2014
People often lack caution or finesse when speaking. They offend easily, they don't think, or they intend to create animosity. Because of this, we must always choose our words carefully and beware of labels.

At American Life League, we spend a great deal of time choosing our words, particularly when we are talking about the most fundamental concerns confronting the culture today. So it was with a great deal of appreciation that I read these words written by our director of outreach, Rey Flores.

Entitled "We do not accept the Hate Card or the Race Card here anymore," Rey's commentary brings clarity to the other side of the "word" game. Our opponents play with labels intentionally created to present false impressions about those they oppose. In doing this, they choose to deceive rather than confront and defend their position.


Words are funny things, yet sometimes not so funny.

Today's society is obsessed with putting labels on each other and using language as a weapon against people with whom we disagree. Like the overplayed Race Card, the Hate Card is another obligatory item found in the vocabulary wallet of the pro-abortion, pro-contraception, and pro-homosexuality crowd.

I, for one, am not accepting either card anymore. In God we trust; all others pay with the cash of truth and facts only.

In America, we still have the freedom of speech and the freedom of religion to speak our minds, defend our Church and, most importantly, abide by and share the timeless truth of our Lord Jesus Christ without having some socially engineered, radical, and extremist social agenda label us as "haters" or "racists."

My not supporting the sin and aberration of homosexuality does not make me a hater or a homophobe. It makes me a Christian who recognizes sin, and I will not enable a selfish desire to wallow in it. Sin hurts God and it hurts us all.

It is because I recognize each person's full humanity and potential as a child of God that I do not support this so-called lifestyle. It is with love, not hate, that I refuse to enable people. God made us for much better things than the depravity of sexual sin, especially homosexual sin which defies natural law as well.

Two can easily play the name game where each calls the other a name and where labels are thrown around, and this would then create a mob mentality of hurt against each other; but where will that get us?

I could easily label homosexual advocates and activists as intolerant, hateful, anti-Christian heterophobes. I could go so far as to say that they are flat-out Christophobes, afraid and hateful of anything that is Christian. But does that sound fair? Sometimes it sounds pretty darn accurate to me.

Furthermore, just because I am not a supporter of Obamacare or the president it does not make me a racist; it makes me a person who still cares about the sanctity of human life and refuses to support a presidency and an administration that advocates for the killing of innocent human life.

Am I a racist because I do not support President Obama who loves, funds, and supports death merchant organizations like Planned Parenthood that have obliterated one-third of America's black population in the last 100 years? Am I a racist because I try to teach people about the eugenicist plans that target minorities?

There are plenty of white and Latino politicians out there whom I would also never support because of their anti-traditional marriage, anti-life, anti-family, and anti-Christian agendas.

No sir and no ma'am, absolutely not. We will no longer accept the false Race Card or the Hate Card. They have both just expired! 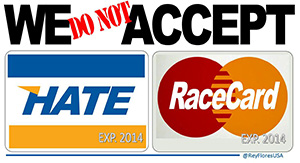