July 26, 2009
Ten minutes into the answer to the first question asked at President Obama's latest press conference, I had a kind of epiphany. This guy should be called the First Brat.

He has all the attributes of a brat. He wants all the attention he can get. He doesn't take criticism well. He is full of bravado and false promises. 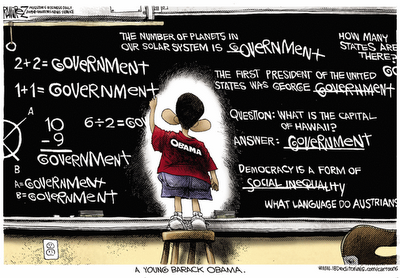 He keeps reminding everyone that he is the President as if the idea surprises even himself. Or as a reminder that he does, indeed, hold a great deal of power, ceded to him by the American people.

There's no real sense of humility about him. Nothing has been more astonishing or annoying has been his World Apology Tour. America may not be perfect, but we are better, more just, more generous than most other nations.

Whatever humility Obama expresses is feigned to further endear him. His wife and children are stage props. Anyone seen or heard of them lately? I love the way he says, "This isn't about me" when it is ALL about him.

He's a brat. It's all Obama all the time.

In a lot of ways, Bill Clinton was too. Clinton, however, was no fool. He understood reality as opposed to wild-eyed dreams of a Democrat-induced utopia where everyone is treated "fairly" and there is no "intolerance," blah, blah, blah. Even someone like myself who loathed him while he was in office has to admit I secretly felt sorry for him because of his choice in wives.

I cannot work up any sympathy for Obama and cannot even take any pleasure in being found right in my judgment of him as I wrote my impressions during the campaign and the first six months of his term. I said he was a moron and I am sticking with it.

Even the public picked up on it as it became evident he couldn't go to the bathroom with a set of TelePrompters and instructions.

The nation has had young presidents in the past. Kennedy comes to mind. He was charismatic, an emblem of, as he himself expressed it, a new generation, formed in the crucible of World War II and ready to take on the enemies of America and of freedom.

Kennedy had been tested in many ways.

Barack Obama has not been tested. He has been privileged at almost every stage of his road to power. It shows in the way he smarts over every perceived grievance and it showed in that amateurish, off the cuff remark about the "stupidity" of the Cambridge police who arrested his friend.

Obama is acutely conscious of race, ignoring the obvious fact that a majority of white people voted for him. In this regard, he will be the eternal victim, another aspect of being a brat. Worse yet, he speaks disdainfully of the "rich" and of "profit," the keystone of a free marketplace.

The need for immediate satisfaction of every whim and, in his case, every policy, is another reason he's a brat. As one political sage put it, "It took Obama six months to pick a dog, but he wants a Healthcare Bill by next week?"

I am not one for predicting because they tend to come back to bite you, but I will predict that Obama's is already a failed presidency. He's already a lame duck. As one of the Blue Dog Democrats in Congress put it, "We're trying to save the party."

The Republicans have played their slim hand of cards quite well. They can smell the blood in the water and all they need now are some appealing candidates; some older guys with good resumes. Youth, it turns out, is over-rated.