Alan Caruba
Obama, the scourge of the Constitution

January 15, 2010
Barack Obama taught a University of Chicago Law School course on the U.S. Constitution. In response to inquiries during the campaign, the school released the following statement: 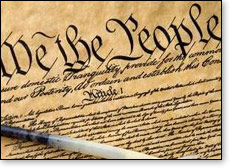 Presumably, he knows something about the Constitution, but that has not prevented him from ignoring parts of it that he finds inconvenient and undermining others.

Putting aside the controversy over his actual place of birth which would render him ineligible to be President, his latest effort to ignore the Constitution comes in the form of a proposed "financial crisis responsibility fee" to be imposed, according to Fox News, on "roughly 50 firms (that) will be subject to the fees, which will apply only to banks, insurers, and investment houses with assets in excess of $50 billion."

"Significantly," noted the Fox article, "the administration will exempt General Motors, Chrysler, Fannie Mae and Freddie Mac from the fees even though most of the current TARP deficit is linked to taxpayer bailouts of these firms." It is worth noting that General Motors and Chrysler owe $66 billion of the total and the insurance conglomerate, AIG, owes about $70 billion. While the government is, for all intents and purposes, owns GM and Chrysler, the real winner in the bailout bonanza is the United Auto Workers.

I am not a constitutional scholar, but among my friends is an attorney and former judge, Lionel Waxman, who writes one of the liveliest blogs on the Internet, "Flashpoint." As he noted in a recent post, "I cut Obama no slack on his ignorance of the Constitution. He was a law professor for Pete's sake. He taught the stuff."

"Here's where he runs merrily athwart the Constitution," said Waxman. "The equal protection clause has been ruled as prohibiting singling out some people for different (treatment) by law than others similarly situated. That's exactly what he is doing. Article 1, Section 10, rules out issuing writs of attainder."

1. An act of the legislature by which one or more persons are declared to be attainted, and their property confiscated.

2. The Constitution of the United States declares that no state shall pass any bill of attainder.

Wikipedia notes that, during the Revolutionary War, bills of attainder, and ex post facto acts of confiscation, were passed to a wide extent. The evils resulting from them, in times of more cool reflection, were discovered to have far outweighed any imagined good. As a result, the authors of the Constitution ensured that such writs of attainder could not be issued by the federal government.

Waxman advises me that the prohibition against Bills of Attainder did not bind the States at the time of the Revolution. It was not extended to the States until the Fourteenth Amendment was passed in 1866, whereupon it was held to be one of the privileges and immunities which the States were then bound not to abridge.

What makes the President's proposal even more outrageous is that the banks he seeks to punish are guilty of nothing more than obeying federal laws that required them to make loans to borrowers that, under normal banking standards, would never have qualified for them. The law is the Community Reinvestment Act and it is one of the primary causes, along with Fannie Mae and Freddie Mac, for the implosion of the housing mortgage market.

Adding to the outrage are the exemptions noted above and the fact that the banks in question have all repaid the TARP money they were literally forced to take!

This President wants to punish banks and other financial institutions for obeying the law! He wants to extract monies from them as a means to reducing the present federal debt, elements of which he voted for. There is no talk whatever of returning the unspent "Stimulus" bill funds to the Treasury towards this end.

Obama is becoming the scourge of the Constitution. His healthcare "reform" bill, major portions of which no one has seen to date, is unconstitutional on several counts, not the least of which is the way it exempts the entire State of Nebraska or extends special provisions to the State of Florida, thus requiring the other States to unfairly pick up the slack.

This is a President who, through his Attorney General, is extending the protection of the U.S. Constitution to admitted enemy combatants! This is an offense to the 9/11 victims and all Americans past and present for whom the document represents hard won freedoms.

If ever there were grounds for impeachment, these and other actions by the President are mounting evidence for such an action.