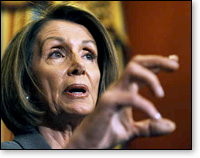 There is no question in my mind that I have lived long enough to see everything the nation once stood for in our own eyes and in the eyes of the world begin to disintegrate and fail.

John Adams, for those who slept through history class, was America's second president, and one of the Founders who participated in the writing of our Constitution. If you worry about deals made behind closed doors, you are herewith reminded that the Constitution was written behind closed doors. Though the room in Philadelphia had its share of lawyers, the man who presided over the process was a soldier and farmer called George Washington. Others included farmers, physicians, and even clergymen.

Along with Thomas Jefferson and James Madison, the sharpest mind among them was that of John Adams. After the ratification of the Constitution, he warned that "a Constitution of government once changed from freedom can never be restored. Liberty, once lost, is lost forever."

The healthcare bill is freedom lost forever. I hope I am wrong, but I now doubt it will be repealed, nullified by the states, or reversed by the Supreme Court. While it is true that most constitutional scholars believe it is unconstitutional, taking and twisting the Commerce clause beyond recognition, I believe the damage has been done.

I freely admit that, before the vote, I remained hopeful that, even if enacted and signed, it could be overturned, but I am now less confident of that. In retrospect, the entitlement society that began in the depths of 1930s Great Depression and has been expanded ever since has proven to be the slow poison that will undo our constitutional system of government.

Conservatives have long warned against the excesses and delusions of liberals, but we have also seen self-identified conservatives like former President George W. Bush preside over the expansion of Medicare with a prescription program that defied any manner of funding at a time when Medicare and Social Security was known to be going broke.

In 2005, Bush did try to mend the system for the vast redistribution of wealth by campaigning to allow workers to divert some of their Social Security into private accounts as a hedge against old age and illness. When Nancy Pelosi said this was a plan to unravel public pensions, the voters decided they didn't like that idea.

I confess I have tried in my mind to dismiss the Speaker of the House as just some lunatic, fringe advocate for liberalism run amuck, but like a lot of Republicans today, it is clear that she was underestimated (along with the Senate's Harry Reid) for her political skills.

She engineered a political victory that has not only restored President Obama's reputation as a leader on the domestic front, but has set in motion the destruction of America's frail financial foundations.

Few believe that the U.S. can continue to borrow the billions necessary to maintain Social Security and Medicare. The alternative, of course, is to tax all Americans to such an extent that it destroys the middle class and drives more corporations offshore.

Speaker Pelosi eat, drank, and breathed Democrat politics from birth. Her father, Thomas D'Alesandro was a congressman and mayor of Baltimore. Her brother was also a mayor of Baltimore. She made her first public speech at age seven at her father's swearing in ceremony.

I opened with a quote by John Adams and will close with one by Thomas Jefferson:

"I predict future happiness for Americans if they can prevent the government from wasting the labors of the people under the pretense of taking care of them."

Americans, however, have long since abandoned the principles of the Constitution, a small and limited central government, for a behemoth that now controls our very lives through a bill that vastly expands the federal government and gives it the power to intervene between our physicians and ourselves.

We have been betrayed by an insurance industry that will be happy to rid itself the high risk and costly need to provide health insurance while continuing to prosper from life, property, and other forms. We have been betrayed by the pharmaceutical companies now salivating at the prospect of future profits funded by the taxpayers. The American Medical Association supported healthcare reform; a betrayal.

Even the States, many of which now want to protect themselves from even greater unfunded mandates, have long since abandoned their sovereignty by allowing the federal government to control education, highways, environment, and a myriad of other local responsibilities.

None of the institutions of government, not the executive, not the Congress, and probably not the courts will uphold a Constitution now distorted beyond recognition. Despite the usual talk of a new revolution, of midterm elections to return power to the Republican Party, the People are essentially defenseless.

Tell me I am wrong. Then tell me why.