May 19, 2010
"Denial" is not a river in Africa, nor is it a proper term for the legion of climatologists, meteorologists, geologists, and others like myself who have devoted decades to debunking the utter rubbish called "global warming." So toxic has the term become, the charlatans pushing the fraud have long since abandoned it and begun to refer to "climate change" instead. 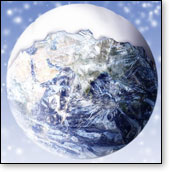 The Earth is 4.5 billion years old and I daresay that its climate has been changing since it first cooled, oceans formed, and one-celled forms of life began to develop into complex creatures like dinosaurs, Al Gore and politicians continuing to lie about global warming.

The Fourth International Conference on Climate Change concluded Tuesday in Chicago. Sponsored by The Heartland Institute, a non-profit, free market think tank, it brought together eminent (and legitimate!) scientists and other distinguished folk for panels and speeches addressing the arcane mysteries of climate.

Among the dignitaries addressing the thousand or more people who attended was former astronaut, Harrison Schmitt, PhD, a one-term Senator who discussed why the U.S. Constitution makes no provision whatever for the Department of Energy or the Environmental Protection Agency. For three days men who know their science in ways that would fill entire libraries held forth.

A Google search for any mainstream media coverage of the event turned up little evidence of it, nor is it likely that were I to list the names of the speakers, you would have ever heard of them. These foremost "deniers" have received short shrift in a media that has been determined to convince Americans that the Earth is burning up due to an infinitesimal amount of carbon dioxide in the atmosphere.

The conference was of great significance this year because the Kerry-Lieberman Cap-and-Tax bill has been introduced in the Senate for the purpose of putting limits on carbon dioxide emissions, i.e., the use of all energy; a bill without a scintilla of scientific justification, nor merit. It will, however, create the buying and selling of utterly bogus "carbon credits" to enrich utilities and those involved in the exchanges based on the global warming fraud.

It will also kill the U.S. economy.

I attended the first three conferences and, although I have been a member of the National Association of Science Writers since shortly after the last ice age ended, I confess that when some of the scientists began to get deep into the issues of climate anomalies, minutia of paleoclimatology and comparable matters, my eyes would glaze over and I would feel a strong urge to take a nap.

It occurs to me that this has long been a part of the problem for most people who either dropped out of school, slept through science class, or who preferred to ignore all the silliness of global warming being blamed for...for...for everything.

The problem is that global warming or climate change is being used to manipulate the world's population into accepting global governance that involves the loss of their nation's sovereignty in favor of international organizations like the United Nations. A draft international treaty making the rounds would be the end of democracy.

Not surprisingly, the whole global warming scam began somewhere in the bowels of the UN, emerged with the Kyoto Climate Change Protocols, and is the basis for the waste of billions on "clean" or "alternative" energy in the form of wind and solar energy.

It is a full scale attack of the very basis for modern life, the use of coal, oil, and natural gas. Those of us living in advanced societies tend to forget that vast portions of the globe have no electricity whatever. How would you like to cook your dinner over dried animal dung?

The conference and the fact that the mainstream media has once again chosen to ignore it is a shining example of why the MSM is losing readers and viewers who have correctly concluded it can no longer be trusted.

Global warming? Here's an excerpt from the latest edition of IceAgeNow.com:

Again? Yet another Alberta snowstorm! — 5 May 10

The biggest news emerging from the conference is that, in addition to the fact that the Earth is ten years into another perfectly natural cooling cycle, it is also verging on another ice age. We are all literally at the end of an interglacial period of approximately 11,500 years.