June 2, 2010
For anyone who has followed Al Gore's Green Brick Road to the land of Global Warming, there has to be more than a bit of schadenfreude  taking pleasure in other's misfortunes  on hearing the news that he and his wife of forty years, Tipper, have separated. However, that feeling is fleeting for reasons that have to do with lots and lots and lots of money. 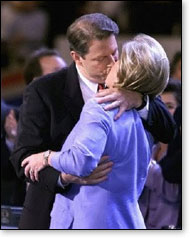 There is always a moment when one gets an opportunity to peer into the mind of someone and discern that something is seriously amiss. For me it came when I read the 1993 softcover edition of his book, "Earth in the Balance."

Deep into the text, Gore wrote, "Within the context of the Strategic Environment Initiative, it ought to be possible to establish a coordinated global program to accomplish the strategic goal of completely eliminating the internal combustion engine over, say, a twenty-five year period."

There a special kind of crazy to propose eliminating the engine the powers automobiles, trucks, motorcycles, boats and most everything else that transports humans and goods across the face of the Earth.

There is a special kind of crazy that hates oil so much it actually thinks it should not be refined as gasoline, but there are people in government who, unable to accept the genius of the internal combustion engine, have mandated that gasoline be mixed with ethanol.

Ethanol is a chemical otherwise known as moonshine. Every gallon of gas costs more while producing less mileage. Ethanol is so corrosive it cannot be transmitted via pipelines. It requires that acres of corn be turned into a useless fuel instead of food.

I break out in a sweat when I think this loony ran for president of the United States and it took a Supreme Court decision to cede the election to George W. Bush, a Midland, Texas boy whose daddy was in the oil business.

While serving as vice president under Bill Clinton, Gore was a driving force for the United Nations Kyoto Protocols that we now know were based on the lies about global warming. Those same lies are the basis for the Cap-and-Trade legislation under consideration in the U.S. Senate.

Al Gore's big, big problem these days is something dubbed "Climategate," the revelation that the "science" of global warming is entirely fabricated and utterly false.

After his election defeat Al Gore put in a call to David Blood, an 18-year veteran of Goldman Sachs. As stated in a new book 'Killing Wealth,' "Together they began talking about the potential for the largest swindle in history." In 2003, "Mr. Gore and Mr. Blood had established Generation Investment Management and created a $1 billion fund to invest in the 'green technologies' that would save the planet."

Thereafter, in collusion with a handful of climate scientists, Gore led the most sophisticated and diabolical campaign to convince people and entire governments that "the Earth has a fever" due to too much carbon dioxide. It would require, he said, green technologies to save the Earth from global warming.

These are, by the way, the same technologies that have reaped millions in subsidies and grants from the U.S. government for those desperate to convince everyone that a zillion wind turbines or acres of solar collectors were a better source of energy that a few coal-fired or nuclear plants.

This is the same global warming scheme that enriched a number of university scientists like Michael Mann of the University of Virginia and government hacks like James Hansen who, as director of the NASA Goddard Institute for Space Studies, started the hoax with his 1988 testimony about global warming before Congress. Their data has since been debunked.

There was, Gore told everyone, a climate crisis and, in the process he grew rich, hailed the first "carbon billionaire" for his various investments.

The problem was that, beginning around a decade ago, the Earth began to cool in a perfectly natural way. In November 2009, the Climategate revelations put the skids to the UN's climate conference in Copenhagen and nations that had bought into green technology began to realize it was an idiotic idea that killed jobs and undermined their economies.

As bad as the bursting of the housing "bubble" has been, the next bubble will be a very green one. And, at the heart of it will be the Nobel Peace Prize winner, Al Gore and his partner in crime, the UN climate change program. People will wonder why his famed documentary, "An Inconvenient Truth," filled with inaccuracies, won an Oscar and was force-fed to children in schools around the world.

Breathing down his neck is Senator James Inhofe (R-OK) who has called for the U.S. Justice Department to investigate possible fraud by the perpetrators of the "global warming hoax." Inhofe is Gore's nemesis. "Every assertion that he made in his science fiction movie has now been disproven..." Should political power in Congress pass to Republicans and when President Obama has left the White House, Gore will have no protection against an investigation that will rival Watergate.

The investigation will involve agencies of the federal government, NOAA, the Environmental Protection Agency, and others as co-conspirators along with the scientists that participated in the global warming fraud. It will likely put a number of people in jail and among them is likely to be Albert Arnold Gore, Jr.

If Al Gore and Tipper are legally separated, it will likely provide a measure of protection for the millions he has secured through a fraud that dwarf's Bernie Madoff's Ponzi scheme.

This, I suggest, is probably the real reason for the separation. It is as coldly calculated as his global warming lies. Even their forty-year marriage must be sacrificed.

The global warming fraud has been undermined by Climategate and by the forces of Nature that are determined by the Sun, the oceans, and the clouds that circle the Earth and remain a mystery to the greatest climatologists of our times.