June 6, 2010
There is a cruel calculus of war. It is the number of casualties required to win. Beyond that, it is the consequences of losing.

Sixty-six years ago, on June 6, 1944, the greatest armada of ships and men laid siege to the beaches of Normandy, France, in an invasion that would put an end to the Nazi conquest of Europe. 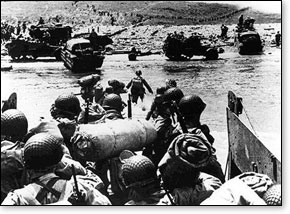 The invasion was divided into sectors involving U.S., Canadian, and British troops, including airborne. Conservative estimates are that the U.S. alone lost 4,696. The U.K. lost 1,043. The Canadians lost 1,204. The total is 8,443 and, in general, it is believed to have been closer to 9,000.

As the battles raged on, pushing into Germany, some American troops under the Supreme Allied Command of Dwight Eisenhower came upon the Nazi concentration camps. Eisenhower ordered all possible photos to be taken and that Germans from the surrounding villages be required to see the camps and even be made to bury the dead.

In words to this effect, Eisenhower said, "Get it all on record now, get the films, get the witnesses, because somewhere down the road of history, some bastard will get up and say that this never happened." 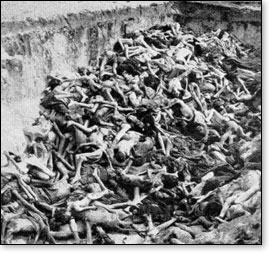 Having previously attacked al Qaeda in Afghanistan, beginning in 2003 American and allied forces engaged in Operation Enduring Freedom, invading Iraq. Between then and now, the total American losses have been just over 4,400 while the British have lost 179 and others 139 for a total of 4,720.

In seven years of combat to create a democratic government there, the losses have been half of what was lost in the D-Day invasion.

As Eisenhower predicted, in Iran and throughout the Middle East and everywhere else that Jews are hated, the Nazi Holocaust, the deliberate killing of six million Jews, is denied.

In the past week, the doyen of the White House press corps, Helen Thomas, demanded the Israelis "go home, to Germany, to Poland." She could have added that the Israelis return to the Arab nations they had to flee following the founding of Israel in 1948 or the Russian émigrés who fled persecution in the former Soviet Union. There are six million Jews who call Israel their home.

The Israelis are home. After an exile of 2,000 years, they returned to their home and restored their nation.

On September 11, 2001, the attack on the Twin Towers in New York and the Pentagon in Washington, D.C. took approximately 3,000 American lives.

In late May, John Brennen, the Assistant to the President and Deputy Senior Advisor for Homeland Security and Counterterrorism, gave a speech in which he described the people who flew commercial airliners into those buildings and who have not stopped plotting to kill more Americans as victims of "political, economic and social forces" who should not be described in "religious terms."

He repeated the Obama administration's assertion that the enemy is not "terrorism," dismissing it as a "tactic" because, he said, terrorism is "a state of mind." Then he added that the word "jihad" should not be applied to 9/11 and the subsequent attacks such as the Fort Hood murders.

Brennen described jihad is "a holy struggle, a legitimate tenet of Islam, meaning to purify oneself or one's community" adding "there is nothing holy or legitimate or Islamic about murdering innocent men, women, and children." Brennen denied the jihad that justified those murders.

Jihad has never really meant anything other than the total conquest of the world to impose Islam.

D-Day was the beginning of an epic struggle to restore and protect Western civilization against the barbarism of Nazism and every day that has passed prior to and since the establishment of Israel in 1948 has been part of this struggle, the legacy of that struggle.

Since the end of World War Two, Americans have sacrificed their lives in places like Korea, Vietnam, Iraq and Afghanistan, joining that struggle wherever freedom is challenged, wherever the barbarism of enslavement has asserted itself.

Does anyone think that the Israelis, on the frontlines of Western civilization in a barbaric region of the world, will not ultimately have to defend themselves against Iran?

That they are not now defending themselves against Turkey that has allied itself with the Palestinians who have no legitimate claim to Israel or Jerusalem, a city holy to Judaism and Christianity? Against a people who would dare to build a mosque within a short walk from ground zero in New York?

Does anyone think we should not have landed on the beaches of Normandy in 1944?

Does anyone think that freedom is not worth fighting for and even dying for?