August 12, 2010
"We have tried spending money. We are spending more than we have ever spent before and it does not work...we have just as much unemployment as when we started...and an enormous debt to boot!" It was a decade of disaster and the man who spoke these words was Henry Morgenthau, Jr., Franklin D. Roosevelt's Secretary of the Treasury. The date was May 9, 1939. 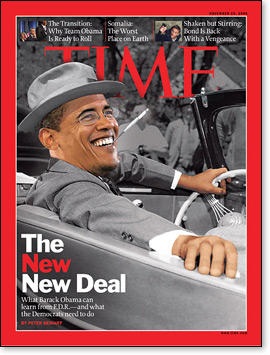 By then the Roosevelt administration had been in office eight years and Morgenthau was addressing his fellow Democrats on the House Ways and Means Committee. In Congress and in the White House today our nation's leaders are repeating the same errors as their predecessors in the midst of the Great Depression.

Reflecting on the errors of the 1930s, Chris Edwards, Director of Tax Policy at the Cato Institute, in September 2005 wrote, "Many people think that we need a big government to prevent, or to reverse, recessions. But the 1930s illustrate that activist policies increase, not decrease economic instability."

What could be more activist than the year and a half that Barack Obama has held the reins of power in Washington, D.C.? From the failed Stimulus Act to the bailout/ownership of General Motors, to the forced imposition of Medicare "reform," to the financial "reform" legislation, Obama has managed to plunge the nation into a level of debt not seen since the end of World War II.

Before departing, a Democrat controlled Congress just voted to send States $26 billion MORE on top of previous bailouts. This isn't governance. It's insanity.

It is not capitalism, nor is it a people capable of great productivity that is responsible for the economic crisis in which Americans find themselves. It is the government and, specifically, it is the growth of government since the 1930s with "entitlement" programs that include Social Security, Medicare, and endless other ways taxpayer money is either wasted or doled out to essentially buy votes.

In January 2004 economist Robert J. Samuelson, a columnist for the Washington Post, wrote that "immense tax increases would be needed" to keep up with the spending mandated by entitlement programs at a time when 77 million Baby Boomers were getting ready for retirement. "If spending  on the elderly or everything else  isn't cut or taxes raised, deficits will spin out of control. What's astonishing is that the problem has been known for decades."

Six years later the warnings of countless economists have been ignored until they could no longer be ignored. The financial crisis in 2008 should have forced a confrontation with harsh realities, but it has not.

Almost comically, a commentary by Jon Hilsenrath in the August 9 issue of The Wall Street Journal was titled "Economy's Quarterbacks Get Out 'Hail Mary' Passes." Citing the official July jobs report which still clings to the lie that unemployment is only 9.5 percent when it is clearly closer to 20%, Hilsenrath reviewed the suggestions being made by various supposed experts, noting that "new spending would spark an outcry in the face of trillion-dollar budget deficits and no plan in place to reduce them." Well, duh!

Few Americans paying any attention know that government spending must be drastically reduced at the federal and state levels. Others know that Fannie Mae and Freddie Mac, together asking Congress for a billion more of taxpayer and borrowed funds, must be phased out of existence even though they own more than fifty percent of all current mortgages. Loaning mortgage money should be a private banking, not a government function.

Despite earlier calls to raise taxes, the notion of allowing the Bush tax cuts to expire is madness at a time when ensuring that Americans can hold onto as much of their own money for both savings and spending is vital to get us out of the present recession.

We need tax holidays, not tax increases. The lessons from the Great Depression are being ignored.

In "A Rather Angry America," commentator Victor Davis Henson, wrote "We see the arrested adolescence and hypocrisy that come from that sermonizing generation (those who came into adulthood in the 1970s) whether in Al Franken's puerile face-making, the ideologically driven suicide at Newsweek, the steady destruction of the New York Times, John Kerry's tax-avoiding yacht, the Great Gatsby Clinton wedding, Michelle on the Costa del Sol, Nancy Pelosi's jet, Tim Geithner's tax skipping, or the constant race-card playing of Charles Rangel and Maxine Waters."

America is sorely in need of grown-ups to oversee its fiscal affairs and they are sorely missing in the present Congress and in the White House. This brings us to the November midterm elections, the last chance to rid the nation of the party that trashed the economy in the 1930s and the people who are presently destroying it again.

The U.S. Constitution was written to ensure a small federal government with specific limits on the tendency of all governments to stifle free speech and plunder the treasury to advance tyranny.

Hard choices lay ahead for Americans and only proven conservative measures will save the nation from a decline about which a mountain of words have been written, spoken, forgotten, or ignored.