Alan Caruba
School daze, plugged in, and zoned out

August 25, 2010
The older you get the faster time seems to speed by. One minute you're talking about the Baby Boom generation, 1946 to 1964, and the next it's Generation X, 1965-1983. If the Boomers thought the world owed them a living, the Gen X'rs were all about "relationships" and the "environment." 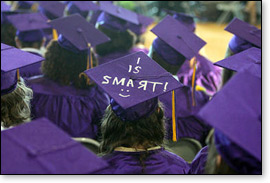 Before you knew it, it was the Generation Y, often referred to as the Millennials, 1984-2002, that everyone was talking about and trying to sell crap to. The oldest of these are age 26 and the youngest age 8. Most young people think the world exists for them, but Generation Y has more reason to believe this than their parents and grandparents.

Their parents doted upon them, insisting on every safety device known to man be used to protect them from scraped knees or concussions. Television networks have entire channels devoted to them such as Disney, Nickelodeon, or Discovery Kids. Their parents had to get by with MTV. Like their parents, they have been demographically targeted as a consumer group.

The federal government is so concerned for them that it came up with No Child Left Behind. Never mind that most earlier programs like Head Start and other social inventions have a record of failure. Whatever is gained in Head Start is rapidly lost when they enter our dreadful school systems.

I have been reading one of the scariest books (remember books, printed on paper, between two covers?) I have received in a while. It's Dr. Tim Elmore's "Generation iY: Our Last Change to Save Their Future." (www.SaveTheirFutureNow.com).

In February 2010, The Kaiser Family Foundation reported that kids between eight and eighteen were spending seven-and-a-half hours each day in front of a computer screen. This is the MySpace, Facebook, and Twitter generation, sending and receiving an average of 1,742 texts per month!

For all this communication, I suspect they are as clueless as their parents who, after all, probably voted for Barack Obama in the name of "diversity" and "multiculturalism." Generation iY is even less prepared to be adults than their parents. "These kids have been online since preschool," writes Dr. Elmore, "and can't imagine life any other way."

There is some good news about those born between 1983 and 2003. Early statistics indicate that teen pregnancy rates are down, drug abuse was lower than their parents, violent crime among this age group is its lowest in twenty years, education and civic involvement was at a record high, and as students they are optimistic about their prospects of changing the world.

Most of the news about this newest generation, however, is not good. They are overwhelmed. According to an American College Health Association random sample study released in 2007, 94% reported feeling overwhelmed by their lifestyles; 44% said they felt so depressed it was almost difficult to function; and almost 10% said they had considered suicide in the past year.

Generation Y is, despite the stereotype, quite competitive and wants to be the best, having been told they are the best from their earliest years. Trying to live up to that is very stressful. They are, no surprise, over-connected. They often cope by escaping into the world of online fantasy video games or the social world of texting, Facebook, and Twitter. Or they push themselves to be a "super kid."

Dr. Elmore says that, either way, they end up with very poor relationship skills and low emotional intelligence. They are short on patience, listening skills, and conflict resolution; all essential if one is to progress toward being an adult.

In the latter years of Generation Y when they are entering the adult world as college students or job-holders, they are also stuck in an adolescence that goes on for too long. They tend to find both challenging in ways earlier generations did not. They often do not make good employees, changing jobs rapidly either because they quit or were fired while in search of a unified sense of self.

It is, I suppose, the lament of every generation that those born after them are inadequate to the task of running the world. Having seven decades under my belt, I tend to look at the generation that came of age in the 1960s, the Baby Boomers, as responsible for a lot of the problems we have today in the nation. The Clintons, for example, are quintessential Boomers.

Whoever thought we would end up with a Democrat-controlled Congress that spent billions of dollars on "stimulus" or "reformed" Medicare without even reading any of the legislation before voting?

Whoever thought we'd end up with a very young, narcissistic President who is so disconnected from the American people that he probably has no idea how quickly they have concluded he is a danger to the future of the nation? Surrounded by academics with no experience in "the real world," he probably thinks he is the smartest one in the room. He's not.

Generation X and Generation Y had better "grow up" or they will be the ones to watch America's economic, military, and cultural dominance disappear in their lifetimes.