December 15, 2010
Recently I received an email and requested permission to share it. It says a great deal about the danger of a government inclined to ignore the Constitution. December 15th is Bill of Rights Day; time to read them if you have not done so already. 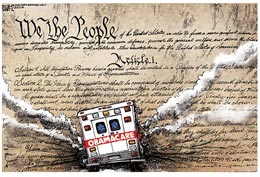 The text below has been lightly edited for continuity and is published with the permission of its author..

I want to thank you for your Warning Signs blog. I want you to know that I am scared out of my wits with everything that is going on...

I was born, raised, and grew up in Communist Poland. I presently reside in the USA since June 1983. I love the country and love Americans. Every time the national anthem is played I tear up with happiness to be lucky enough to live in The Greatest Country on Earth!!

What I see happening all around us is very troubling, since Obama's election and the great number of people looking forward to change and hope to get us on track to build a better tomorrow. The light at the end of a tunnel, however, has turned out to be a TRAIN!!

Of course, as everyone, I have my opinion just about everything...

I am not the sharpest tool in a shed, but I call Obama "The Closer" just like the TV show I watched a few years ago. Over the years our society was brainwashed and socially conditioned

I've experienced it back in Poland when our party Leaders were feeding us utopia, talking about the greatness of our country, how proud we shall be, how lucky we are, how together we shall build it even stronger, work harder, save more, and as one we will overcome the BAD AMERICA!!!, the source of evil, racism and slaves!. All the time they kept us with no freedom and communist propaganda in the newspapers and on TV.

I remember as a young child — maybe 9 or 10 — my Father and I would wake up at 2:00 AM to listen to 'Free Europe" (BBC station) a one-hour broadcast on the radio. The transmission was very much interrupted with static, but religiously we were finding out some truths. Our window was covered with a heavy blanket (we did not want to take any chance with neighbors or passing police patrol noticing any activities.)

Even when we talked about it later and I had some questions it was always done in such way that my 6-years younger sister couldn't be near for fear of her saying something to someone.

I remember when Russians invaded Czechoslovakia in 1968. The whole school was gathered by the main road, we were given Russian paper flags and were told to wave at the moving tanks and heavy military trucks and yell "hello" and clap and be happy that we have such good help in the Soviet Union to protect us from the 'evil movement' that had spread over Czechoslovakia that they said put us all in danger.

My late Father always told me "Keep your eyes and ears open and your mouth shut and if you ever have an opportunity to escape safely don't even take a second to think about it. Just go for it and make a better life for yourself in a free world where you can talk without blankets in a window"

Sadly I see my country, the country that gave me the opportunity to enjoy freedom in all aspects slowly becoming a closed-door agenda, anti-American bills and policies not upholding the values on which it was established and for which thousands died to keep it true.

I am offended when Obama is not holding his hand over his heart when the anthem is played.

I am offended when he called me an enemy.

I am offended when he bowed to the Saudi Arabian king!

I am offended with his lies so obvious and bold that a deaf person could hear it!

As far as I am concerned he is not my president.

I am concerned we increasingly live in a society where everything we say or write can be fodder for those who think the Bill of Rights was written for a different age or people and no longer applicable.

On Bill of Rights Day it is useful to recall that several of the original States refused to ratify the U.S. Constitution unless the Bill of Rights, the first ten Amendments, was included.

If America is not about personal, individual, political, and spiritual freedom, than it is not America. It is about the rights reserved to the States and the People. Without them, life in America will be no different than the Communist Poland from which my correspondent escaped.