Alan Caruba
Humans! Get over yourself!

January 2, 2011
The greatest absurdity has been the belief that human beings have any influence over the planet on which they live.

The Earth is the third planet from the Sun and the fifth largest of the Solar System's four terrestrial planets. It is the only planet that sustains life as we know it and humans came late to the party. 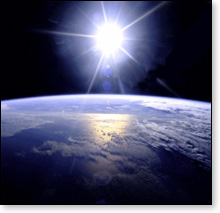 The Earth is dated to be 4.5 billion years old in a universe that is increasingly believed to have always existed, despite the Big Bang theory. Such evidence as exists suggests it is the only planet that has given rise to the evolution of life from self-replicating molecules, starting around 4 billion years ago.

Scientists have given names to the various periods of time of the Earth's existence. These include the oldest, the Devonian, followed by the Silurian, Ordovician, Cambrian, Paleocene, Cretaceous, Jurassic, and Permian among others.

Robert W. Felix, in his book, "Magnetic Reversals and Evolutionary Leaps," notes that "For all intents and purposes, though, life on Earth began about 580 million years ago at the beginning of the Cambrian Period, when new life suddenly exploded across the Earth."

"A dizzying burst of shelled forms took place, and virtually all major forms of animal life." This is known as the Cambrian explosion and Felix notes there was an "abrupt change from simple life forms to more advanced. No one knows how or why it happened. What we do know is that the pattern has always been the same — sudden — always sudden."

What we do know is that mass extinctions have marked every period since the Earth's beginning. Following the Cambrian explosion around 535 million years ago there have been at least five major mass extinctions, all pre-dated the existence of mankind. Indeed, mankind didn't begin to gain traction as a species until the end of the last continental glaciation — ice age — about 10,000 years ago.

Civilization is defined in a variety of ways, but is usually dated to the development of agriculture and the organization of human life around villages and cities. The Jews date their history back 3,500 years, but some date their arrival to 5,000 years ago. The last ice age ended about 10,000 years ago, so humans as we know ourselves didn't begin until well after that event.

We are now 11,500 years since the last ice age and the next one is due any day now. The Earth has been in one of its cyclical cooling periods for a decade, the result of less solar activity, also a cyclical event.

Humans, you need to stop worrying about "controlling" carbon dioxide and stop passing laws to reduce its emissions. CO2 is 3.618% and man-made CO2 is even more miniscule, only 0.117%. Without CO2 we and everything else dies.

As the late Dixie Lee Ray, former chairman of the Atomic Energy Commission, noted, "Such increases (of CO2) have occurred in the past without any help from us at all, and this time is probably no different. Most likely, the causes were and still are colossal cosmic forces quite outside human ability to control."

The Earth's atmosphere is composed primarily of 78% nitrogen and 21% oxygen. Water vapor is being constantly recycled from the atmosphere to the Earth and absent the atmosphere no life would exist on Earth.

The most recent magnetic reversal occurred approximately 700,000 years ago and reversals appear to occur in sync with ice ages and with the procession of the equinoxes.

We just experienced a winter solstice, one of the equinoxes marking the seasons as the Earth hurtles through space, circumnavigating the Sun, completely indifferent to human beings and all other life. In the southern hemisphere, they had a summer solstice.

As the human race continues to grow in numbers; it reached 6,803,000,000 by the end of 2007 and is projected to reach seven billion by 2013, it is worth keeping in mind that only 13.3% of the Earth surface is arable; which is to say is available for growing crops that in turn feed us and the livestock we grow.

Only about one-eighth of the Earth's surface is suitable for humans to live on. Three-quarters is covered by oceans, while half of the land area is either desert (14%), high mountains (27%) or unsuitable unless you are an Eskimo or Bedouin. Most of us live in or near cities.

The relatively short history of humans demonstrates a capacity for violence documented in myths, the Bible, and recorded documentation of wars without end.

There is little evidence that murder, individual and organized, for any reason or no reason will end. The primary change of the last century was the development of nuclear weapons to destroy humans in numbers that defy the imagination.

So, humans, get over yourself!

After the next magnetic reversal, the survivors — if there are any — will likely learn nothing from the experience.