February 16, 2011
Remember when everyone was calling George W. Bush stupid? I do. Since then, his published memoir of his years in the White House has been on the bestseller lists following two years of Barack Obama's unrelenting blunders and lies. 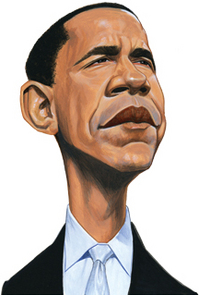 From the beginning of the Obama administration, there were all manner of evidence that a group of hapless, moronic ideologues had been handed the reins of power. Early nominees for key posts were jettisoned or withdrew from consideration for a variety of reasons. This was followed by a huge overlay of "czars" for everything, with undefined power over and above the Cabinet Secretaries in charge of various departments.

Two years later, the candidate who campaigned against the Iraq war decisions and implementation, against Guantanamo, and deemed Afghanistan to be the "real war" is pursuing the same Bush programs. The general credited with victory in Iraq has been put in charge of Afghanistan and not been heard from since.

When the Iranians protested in the streets of Tehran last year, Obama missed a major opportunity to throw U.S. support behind them. Instead he said he did not want to "meddle" in Iran's internal affairs! Fast forward to Egypt and President Stupid was declaring on worldwide television that President Mubarak had to go "now." Well, he's gone and, thank God, the military is still in charge.

Surrounded by imbeciles and ideologues, President Stupid's national security director declared that the MUSLIM Brotherhood was a "secular" organization. His science advisor thinks all the ice at the North Pole is melting. His EPA Director thinks that carbon dioxide, a gas vital to all life on earth, is a "pollutant" and is asserting the authority to regulate it.

In both the first and second State of the Union speeches, President Stupid rambled on about green jobs, solar and wind energy, and now the need to spend billions on a "high speed" rail system in a nation where Amtrak has been losing money from the day it opened for business. In a time of severe deficits and national debt, how dumb do you have to be to want to throw billions at an unneeded new rail system?

Obamacare is the pinnacle of President Stupid's "achievements" thus far. It has been declared unconstitutional by two lower courts and is likely to be declared null and void by the Supreme Court before he leaves office. The House Budget Committee just released a report that estimates the loss of 800,000 jobs if it becomes law. You have to be stupid to keep handing out "waivers" to Obamacare in all directions as an admission of its failure to apply only to those who do not have friends in the White House.

You have to be stupid to keep defending "global warming" or "climate change" when this huge, global hoax was exposed in 2009 as a fraud. Meanwhile, a natural cooling cycle caused freezing weather that just wiped out 80-100% of Mexico's crops.

You have to be stupid to openly declare that you want to drive the coal industry out of business when it provides half of all the electricity the nation uses every day, but that is precisely what President Stupid's administration is doing.

You have to be stupid to declare a moratorium on drilling for oil in the Gulf of Mexico after courts have twice told you to remove it.

You have to be stupid to lecture the U.S. Chamber of Commerce on how to create jobs when your economic policies have been killing them for two years. And then tell them they have to redistribute their profits to their workers. They already do that. It's called wages!

You have to be stupid to have spent the first two years of Sundays playing golf and then expect people to believe you are deeply religious.

You have to be stupid to keep bowing to foreign leaders of nations from Saudi Arabia to Japan to China when the President of the United States must never bow to anyone. We don't even lower our flag in the presence of foreign leaders.

You have to be stupid to believe you can get away with telling lies when even an adoring press is finding it increasingly difficult to cover up or defend this behavior.

Watch now as the press begins the run-up to the 2012 elections by emphasizing how brilliant President Stupid really is.

Already the talk is about a surefire reelection if the unemployment rate gets down to eight percent when its average over the pre-Obama years has usually been around five percent and actual unemployment is twice the official figure of 9.6 percent.

You have to be stupid to think Americans will be fooled again. 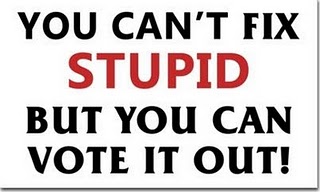