Alan Caruba
The party's over

March 10, 2011
We all see the world through the prism of where we live. Most of us live in the cities and suburbs. From the early 1940s when my parents moved to the picture postcard town of Maplewood, N.J. that is where I grew up and have spent most of my life. 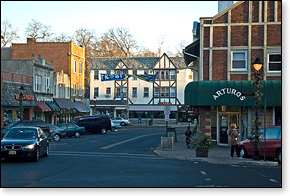 Maplewood is a quick half hour train trip into downtown Manhattan and is a bedroom community for many executives that work there. It is famous for its many tree lined streets, manicured lawns, and homes, many of which were built starting around the 1920s after the Erie Lackawanna made it a regular stop. Its school system was renowned. It's still a beautiful town and its village shopping area was the setting for scenes in the film "One True Thing."

When the property taxes on my home there continued to rise, myself and many other senior citizens who had lived in the township elected to move. My older brother had already set up house in Florida, God's waiting room, but I elected to move one town over into a swanky new apartment complex, allowing me to make the short drive into the "village" of town every day to purchase sundries and get what, for me, passes for exercise.

What struck me today was the way the small office building in which my CPA's firm is headquartered is bereft of any other firms. It used to house a photographer's business and one that sold insurance. I left off my 2010 tax records. Across the street a take-out food store had closed its doors. The town's pet store had departed not long ago.

As I walked toward my car I realized that yet another gift shop had bit the dust. Other shops, too. One of the town's busiest real estate firms had a window filled with pictures and descriptions of homes for sale. My former home where I had lived for more than sixty years had changed owners twice in seven years.

The short drive back to my apartment complex included passing homes with for-sale signs, too numerous to ignore.

When the phone rings these days it's usually one of a small circle of longtime friends. One of them runs a longtime, successful enterprise that matches people of differing expertise with reporters needing some quick information and insight, a quote on some subject. Talk radio and TV producers use it to find guests.

Over the twenty-seven years I have known my friend he went from running the business from his apartment to a large office with a full staff. He now runs it from his apartment and it is a virtual business. His directory of experts is print-on-demand for those who request a copy and many of the computer and web services he uses are provided from Bangalore, India.

Like a fish in water, it occurred to me that I haven't met face to face with any of my clients in years. We communicate mostly via email or occasionally on the phone. I am trying to remember when I last put on a suit and tie. I can't.

When I turn on the television news or listen to it on the radio, what I really hear is that everyone is waiting for the megalith we call the federal government to come up with a budget and to fund its function for another two weeks!

When a nation cannot operate in a predictable, rational way, it forces people to put a lot of ordinary decisions on hold.

That's why a great swath of businesses is just waiting for someone to buy something. The ones that provide goods that are essential, food, toilet paper, things to keep the house clean, medications, are okay, but anything that is non-essential is moving far more slowly. Even the catalog operations that depend on moving all manner of household items are slashing their prices. The $10 "rehab exercise ball" is now $6.00. The $14 "ratchet pruner" is now $8.00.

I used to go to a nearby mall to purchase things. Now I go on the Internet and they are delivered in two or three days at most. The most extraordinary business in America is the delivery business, whether it's Fedex or UPS.

As the price of gasoline goes up, reflecting the turmoil throughout the Middle East as it recedes further into its dark ages people are going to travel less. Visiting grandma will be by iphone. The huge business of trade conferences will be hard hit. In turn, hotels, airlines, and tourism will feel the affect.

Nobody has any idea how America will pay off the huge debt it has acquired — the bulk of it in just the last two years — and still Congress critters argue over cutting pitifully small pieces of it.

We have huge government departments and agencies that should simply be shuttered, along with their matrix of duplicated and overlapping programs that suck up millions, if not billions, annually. It won't happen.

There is a lull in the life of the nation. Shops are closing. Homes are going unsold or foreclosed or both. Everything looks "normal," but it isn't. The party's over.