March 14, 2011
Have you noticed that you rarely hear "global warming" mentioned on radio or television and the term rarely occurs any more in the print media? 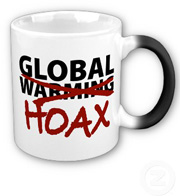 To borrow a line from Shakespeare, I come to bury global warming, not to praise it.

An early and unrelenting skeptic from the days it first debuted in the late 1980s, I rather instinctively knew that the only warming occurring was the same natural warming that always follows a cooling cycle; in this case the warming that began in 1850 after the Little Ice Age that began around 1300.

It never made sense to me that "industry" should be blamed for pumping massive amounts of carbon dioxide into the atmosphere when the amount of CO2 was a minuscule 0.038 percent with far greater amounts of hydrogen and oxygen that protect the Earth from becoming the galactic equivalent of a toasted marshmallow.

Then, too, like oxygen, all life on Planet Earth is dependent on CO2, a gas that the Environmental Protection Agency is actually calling a "pollutant." That is so absurd that I was confident people would laugh the whole "theory" out the door when it was first proposed. But that was over two decades ago.

The end didn't begin until November 2009 and the release of thousands of "Climategate" emails between the meteorologists supplying the bogus data that the United Nations Intergovernmental Panel on Climate Change (IPCC) used to generate the greatest hoax of the modern era.

Not since the discovery of the "Piltdown Man" had so many scientists allowed themselves to be taken in by a complete fabrication; one based entirely on falsified computer model data. Worse still, many climbed on board the global warming bandwagon to reap some of the billions in grant money involved.

The fact that "global warming" was generated by the United Nations should have been the red flag that something was not just wrong about it, but that it hid an agenda aimed at Western industrialized nations.

I think global warming gained credibility as much from the support of the leaders of Western nations as from the great difficulty skeptical scientists encountered in gaining any traction against it. To this day President Obama still prattles on about the need for solar and wind power to replace fossil fuels in order to avoid "climate change" from their use.

The current Prime Minister of Australia is busy trying to impose a carbon tax on that nation. The British have dug themselves a deep hole by embracing windmills instead of coal mines. Billions have been wasted by Spain and Germany on alternative energy sources.

The anti-energy agenda will have devastating affects on life in the West. Electricity consumers in the United Kingdom were recently told by the CEO of the country's grid operation that, by 2020, they will have to get used to having no electricity for periods during the day and night. This will put the U.K. on par with North Korea. And the U.S. is not far behind if it does not quickly reverse current energy policies.

In the U.S., the leading voice for "global warming" became the former Vice President Al Gore who, following his defeat for the presidency ,set about becoming a multimillionaire with all manner of "global warming" projects and enterprises. He would eventually win an Oscar for his documentary and a Nobel Peace Prize that was shared by the IPCC. Today, however, Al Gore is a joke.

The legacy of "global warming" has been the decades-long attack on U.S. energy sources until today our vast resources of coal and oil remain in the ground instead of being available as the price of oil increases due to troubles in the Middle East and the cost of electricity increases due to laws mandating that utilities must buy from wind and solar electricity producers who would be out of business by next week without those government mandates.

The public acceptance of the "global warming" hoax has waned even as the mainstream media has tried to hide the truth. The rise of the Internet has seen to that and other more pressing, real challenges are shoveling dirt onto its grave. 9/11 refocused public attention on a real threat. The 2008 financial crisis still holds the nation in its grip.

The global warming corpse is not quite dead, but dead enough for now. The question is what new fraud will the United Nations and environmental organizations perpetrate? The "acidification" of the world's oceans? "Species extinction" or "Invasive species"? Be assured, the UN mafia is at work on something.